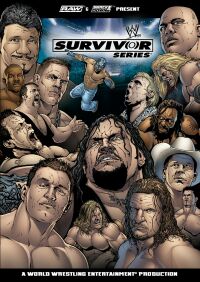 The 2004 edition includes a battle for control of Raw and … not much else.

I remember getting this show on pay-per-view as it happened, because I was sucked in by what Raw was doing with Triple H’s World Heavyweight Title reign and his growing feud with Randy Orton, Chris Benoit and Chris Jericho. But outside of the main event, I remembered almost nothing else from this show. It’s really a pretty bland show with little of consequence happening outside of the main event. And even that was a set-up for the weekly television program, leading into a new January pay-per-view.

The Triple H “Reign of Terror” was coming to an end, but we needed a successor. It would seem at this point that the successor was Randy Orton, but the general opinion is that his time as top babyface wasn’t working. But WWE had yet to course correct here, still pushing Orton here, with the Legend Killer winning four weeks of control of Raw for his teammates, leading to a held-up title and an Elimination Chamber match at New Year’s Revolution.

We got a small tease of Batista stepping up here at Survivor Series, but I doubt WWE had fully committed to the change yet.

Overall, the main event was good, if not a bit predictable. It did, however, provide Triple H with his first (!?!) Survivor Series elimination, pinning an injured Maven after Snitsky knocked him out with a chair. Elimination matches really aren’t Triple H’s thing…

Best Match: Shelton Benjamin (c) defeated Christian – Intercontinental Title Match. I was a big fan of both of these guys in 2004-2005 and I was really rooting for them to make it up to the top of the card. Sure, it was pretty obvious Christian was going to be the Jannetty to Edge’s Michaels, but he had a great entrance theme and there was a lot of potential there that unfortunately didn’t come to pass. The same could be said about Benjamin, who had great matches throughout his time in WWE, but never got above the midcard. The combination put on a really fun match at Survivor Series 2004. I love Benjamin’s offense and I’m looking forward to his return to SmackDown.

Worst Match: The Undertaker defeated Heidenreich. Two big, plodding guys shouldn’t be given as much time as these two were given here. The Undertaker was still a bit away from his resurgence of great matches, which wouldn’t happen without good partners in the ring with him. Heidenreich was never going to give anyone a 5-star classic. He’d be lucky to get a 3-star match out of the guy. The best part of Heidenreich here was his interaction with Snitsky in a vignette, where Snitsky said he liked Heidenreich’s poetry and Heidenreich liked what Snitsky did to babies. And even THAT segment went on too long with all the heavy breathing…

Planting the Seeds: A backstage segment between Edge and Kurt Angle – who were on different shows at this point – was an early tease for WrestleMania, as Edge bragged about putting Shawn Michaels out at Taboo Tuesday. Angle responded that he, too, could beat Michaels, and he’d do it quicker. Edge and Michaels settled their feud with a one-on-one match at the Royal Rumble and Michaels ended up facing Angle at WrestleMania in an interpromotional match set up when Angle bloodied Michaels after HBK tossed Angle from the Royal Rumble match.

Much Too Short: The WWE Women’s Title Match could have been a fun match between Trish Stratus and Lita, with Lita looking for revenge from all the catty comments Trish was making when Lita “lost her baby” – man, that was such a terrible angle, with Snitsky causing Lita to miscarry… I can’t linger on it – but this was all angle. Trish wins via DQ when Lita hits her with a chair and this feud MUST CONTINUE!

On The Cusp: The WWE must have known it had something special with John Cena, but he didn’t get much play during his elimination match, teaming with Eddie Guerrero, Big Show and Rob Van Dam against Carlito, Angle, Luther Reigns and Mark Jindrak. Instead, he ran U.S. Champion Carlito out of the building to set up a SmackDown match later that week. While he wasn’t a featured player during the match, the cameras followed him backstage as he brawled with Carlito and his body man Jesus to the backstage area, leaving me to wonder what the other 6 guys in the match were doing? Just watching the Titan Tron to see what happened? Cena was just months away from his WWE Title win and basically taking over the company for the next decade.

A static Top Ten this time around.

Big Show and Chris Jericho climb up the list a bit.