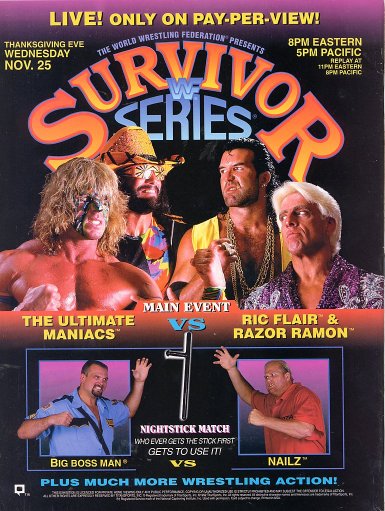 In 1992, we get a Perfect face turn and a dearth of elimination matches.

Well, that poster isn’t an accurate depiction of the main event, but to be fair, everything about this card felt topsy-turvy going into the final couple weeks of build-up. When the card for Survivor Series 1992 was being put together, Ric Flair was WWF Champion, The British Bulldog was Intercontinental Champion and The Ultimate Warrior was employed by the company. Flair dropped the title to Bret Hart at a house show in October. The Bulldog was nailed for a drug violation and dropped the Intercontinental strap to Shawn Michaels at the start of November and the Warrior was gone from the company as well.

The promoted main event tag team match was turned into the midcard main event while the actual main event became the first pay-per-view encounter between Hart and Michaels for the WWF Title. Instead, we got an amazing angle-filled tag team match pitting Flair and Razor Ramon against Randy Savage and “Mr. Perfect” Curt Hennig, who up until about a week before the show had served as Flair’s executive consultant. Only in professional wrestling.

The story unfolded on an episode of Prime Time Wrestling, where Perfect and Bobby “The Brain” Heenan mocked Savage for being without a partner for the big match. Savage picked Hennig to replace the Warrior and Hennig accepted after having enough of Heenan’s backhanded remarks. The match itself was a lot of fun, too, and would have been a great main event had they not decided to go with a WWF Title match instead.

Best Match: Bret “Hitman” Hart (c) defeated Shawn Michaels – WWF Title Match. Welcome to the main event, boys. Just about six weeks after Hart’s shocking WWF Title win at a house show in Saskatoon, Saskatchewan, Canada, Hart and Michaels get to main event one of the biggest cards of the year. The two men who would carry the WWF over the next 5 years were still finding their footing, but the match made them both seem like they belonged in the main event picture.

Worst Match: Big Bossman defeated Nailz – Nightstick on a Pole Match. What a waste of 6 minutes. The feud between the former prison guard and the ex-con would fit right in with the WWF of the mid- to late-1980s, but it felt oddly anachronistic to me in 1992, and it didn’t help that Nailz was a terrible worker. Even the Bossman, who doesn’t get enough credit for his in-ring work, couldn’t get anything bearable out of Nailz, and the finish felt like it came out of nowhere.

With Tears In Their Eyes: The WWF was going overboard at the 1992 Survivor Series to hype Bret Hart up as a guy who could carry the weight of the WWF Title. Announcers declared that  “[d]espite his short reign, he has defended the title more than any other champion in WWF history” – in just the six weeks since he’d won the belt. “Mean” Gene Okerlund would then list off the names of the people Hart had defeated in those six weeks, in order to impress the viewing audience with names like The Mountie, The Berserker, Rick Martel, Papa Shango and Virgil. Not exactly a murderer’s row of challengers there. Did Flair even GET a rematch against Hart? Say it with me now. That’s not fair to Flair!

Send in the Clowns: During the otherwise pointless match between Tatanka and Rick “The Model” Martel, fans got a glimpse of a as-yet unnamed Doink the Clown, terrorizing kids in the audience.

Eliminations Eliminated: There was only one Survivor Series elimination match in 1992 and it was a 4-on-4 match between two sets of tag teams, the Nasty Boys and the Natural Disasters against the Beverly Brothers and Money Inc. The match was contested under the tag team rules from 1987 and 1988, so two eliminations got the win. A pretty lackluster match in a card full of them.

We now have three matches without elimination rules in the Top 10!

With only one traditional Survivor Series elimination match, the only thing that changes is that we get one more guy in the tie for ninth place.