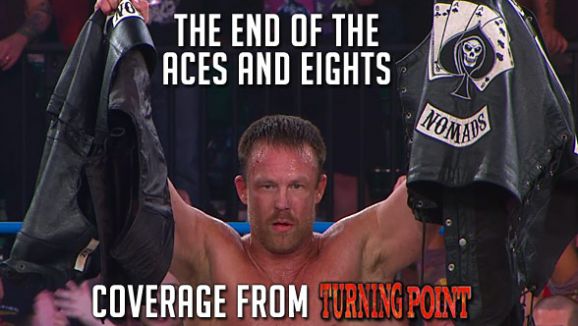 #Impact 365 takes us to a local watering hole in Orlando, where Bobby Roode attacks James Storm in a scene that harkens back to the APA days in the WWE. Extra in bar: “Somebody call somebody!”

Mike Tenay and Taz are back in the old announcing table near the entrance.

Turning Point begins with a PPV-quality introduction video, AND…Dixie talking to Samoa Joe in a skit backstage, decrying his tone with her last week.

And, now she’s out on the new Universal Studios soundstage. Set looks good, cameras look sharp, some of the high school girls playing fashion show are back, and Dixie’s still babbling. She’s folksy! Thankfully, James Storm comes out to interrupt with his bull rope. He asks to change his match to a Florida Death Match because of Roode’s attack. Storm blackmails Dixie, threatening to press charges against Roode if she doesn’t acquiesce. Dixie’s new tag line is “I don’t like that tone.” Storm gets his way by asking, pretty please, with sugar on top.

Match #1: Magnus vs. Samoa Joe in a Falls Count Anywhere match, first round match in the TNA Title Tournament

Joe, still backstage, demands that Magnus join him for a brawl.

After a break, we have ourselves a vintage WWE Hardcore match. Joe and Magnus exchanging blows on the ramp. Presentation with the new set is slightly different. It feels like everybody’s trying to up their game tonight, even on commentary. Magnus taking control with a sitout body slam. The two eventually battle on the ropes until Magnus knees Joe off, then lands the elbow off the top. Magnus fails to get on the cloverleaf and runs into the STJoe. Joe flies out of the ring with a forearm! It only gets a two count on the floor. Magnus throws Joe into the ring, and then grabs a chair, wedging it in between the rope. Kokina clutch on the floor by Joe! Magnus breaks the hold, and Joe gets run into the chair headfirst, collapsing. Magnus gets the three count in approximately twelve minutes, including commercials.

Decent enough match, but it felt like it ended prematurely, as if they could have gone a few more minutes.

Bad Influence out, and looking sharp. They (and their glorious derrieres) are out to watch the forthcoming train wreck between Joseph Park and his brother. My goodness, what is Christy Hemme wearing tonight? Joseph Park fires himself up with his best speech. No heat at all, and, shock of shock, Abyss doesn’t come out when his music plays. The announcers are playing it off as if they’re different people. WTF? Bad Influence, and Christopher Daniels especially, calls Park every name in the book. Kazarian pours a bucket of faux blood on Park. Do we get an Attitude era reference every segment? Daniels continues to call Park a loser. Park walks away, and Tenay wonders why Park didn’t turn into Abyss. BECAUSE IT’S NOT HIS OWN BLOOD. WHY AM I ARGUING THE MERITS OF THIS STORYLINE? WELP, at least Daniels and Kazarian did their best with what they were given.

We return from break with the amazing Gail Kim and Lei’d Tapa for week 2 of the open challenge. It’s Candice LeRae of PWG (spelled “Larea”)!

Couple forearms, but Kim takes over with a running corner dropkick. Huracanrana and sunset flip from Larea. She runs into a nice sitout powerbomb from Kim. Eat Defeat wins it in a hurry. Larea looks fantastic on TV, although it seemed as if she had a bit of jitters at times.

Ha, ha! We get another “Friends of AJ” PAC ad, with highlights of AJ Styles defeating Wrestle-1’s Seiya Sanada in Japan. Even though they’re a bit cheesy, I like how they’re keeping us updated on AJ Styles’ whereabouts during his trips out of the country. They really should think about doing a crossover with ROH for one night.

Ken Anderson backstage with Jeremy Borash, and he vows to take revenge against Bully Ray.

Gunner Von Erich meets up with Bobby Roode, offering support for his partner. We get a history of Bobby Roode’s relationship with James Storm.

Match #3: James Storm vs. Bobby Roode in a Florida Death Match, first round match in the TNA Title Tournament

Magnus attacks with a kendo stick before Roode can even disrobe. Rules stipulate that you can only win when your opponent cannot answer the ten count. Storm busted open after being thrown into the post. Roode launched over the staircase at ringside. Those weigh at least five hundred pounds, you know. Storm throws in some garbage cans filled with plunder. Enziguri by Storm after he flipped over the top, but Roode recovers and smashes him with a cookie sheet. Tony, he be clubberin’ Storm with that crutch! Storm comes back and smashes a garbage can into Roode’s crotch with a kendo stick. They’re just beating each other with weapons, now. Sunset flip off the top? Roode tries to catapult Storm into a garbage can, Storm stops, and starts chucking the can into Roode. Roode bumping like a madman.

Storm attempts the Eye of the Storm on a garbage can, but Roode reverses into a spinebuster. This is much more of a hardcore match than the Joe/Magnus match ended up being. Both guys beating the crap out of each other with the trash can lids. Last Call out of nowhere! Roode falls out of the ring, finds a beer bottle, and in a great call back to the start of their feud, smashes it over Storm’s head. Really fun brawl, and it continues as Storm beats the ten count! Roode setting up some chairs for something – a modified Attitude Adjustment? He hits it! Both chairs explode on contact. “Die, you son of a bitch, die!” That’s sassy. Crowd going bananas for Storm, and here comes the barbed wire board. They’re going all out tonight! Here comes Gunner? And he throws in the towel? Roode gives a little smirk. Are they in cahoots?

Great match; it will be interesting to see what occurs next in this storyline.

After the break, James Storm is pissed at Gunner, and the announcers are taking Gunner’s side. Gunner proclaims that he didn’t want Storm’s career to end.

A repackaged Samuel Shaw is with Christy Hemme, doing a modified version of “Cribs.” He’s showing off his art book, hiding some more “dark” drawings from Hemme. After the clip, he asks Hemme out on a date. This was far less cheesy than it sounds like in text.

EC3 runs into Dewey Barnes and NORV! and explains that he personally flew the two into Florida to tell them that they suck. Hilarious.

Aces and Eights push Jeremy Borash out and replace him with Brooke. Bully Ray is great here, reminding Ken Anderson who welcomed him into his group after TNA showed him the door.

More interview segments…Angle talks up his semifinal match versus Magnus, and he’s told that Dixie Carter needs him immediately. Great.

Tenay and Taz tease a returning legend, as EC3 says he has to step up the level of his competition. Sharkie is still utilizing his Stone Cold gimmick. Kurt Angle is playing a role in 1D Day. That’s a thing that’s happening. Shark Boy has not been keeping fit on the trampoline, waiting for the call. This is sloppy. Headlock DDT for the victory.

Taz: “If there is a God, we won’t see Shark Boy for another five to ten years.”

Video recap of the history of the Ken Anderson/Bully Ray feud. My wife lets me know that I’m watching a show whose lead-in is Cops.

Dixie backstage, begging for attention from Kurt Angle and Bobby Roode, who will lead teams of four into a Survivor Series elimination match, the Thanksgiving tradition, during next week’s Thanksgiving Day edition of Impact.

If Anderson loses, he’s done with TNA, if Bully Ray loses, Aces and Eights disbands. Some of the locker room empties to watch the match. Jeremy Borash gives the introductions, but Ken Anderson can’t wait, attacking Bully before finishing his own announcement, punctuating it with some shots to the gonads. Evidently, this is no disqualification. Crowd is hot for Anderson. Bully hides behind Brooke and shoves her into him. Both guys brawl outside of the ring, and Bully brings in a table as we cut to commercial.

Upon return, the table is set up diagonally in the corner. Bully suplexes Anderson back into the ring. He takes control, ripping off the shirt of Anderson in the process. Stiff avalanche by the ex-champ, and he’s got out the chain now. Anderson recovers the chain after a missed elbow and starts whipping Bully with it. He misses a punch, and eats a strong Rock Bottom type maneuver. This is much better than I thought it would be. I’m not the biggest fan of either of these guys, although Bully Ray has grown on me as a badass heel. Bully gets back-dropped on the floor. Anderson teases a piledriver on the concrete, but Knux attacks. Anderson reverses, piledrives Knux on the floor and then rips off his kutte. Anderson punches Bully Ray in the groin again as Bully stood astray the second rope. Rolling slam follows, but Bully blocks the Mic Check and spears Anderson through the table. Brooke grabs the hammer from Taz but overthrows Bully Ray. Anderson catches it, drills Bully and hits the Mic Check for the three, disbanding Aces and Eights.

Anderson tears off the kutte of Bully Ray, and Taz hands his over to Angle and Joe. The reign of Aces and Eights is over. Looks like Bischoff wasn’t even at the taping. Perhaps the piledriver on the stage wrote him off the show.

By far, this is the best Impact since I took over recapping duties from Scott. I’d strongly argue that this episode surpassed Bound for Glory in terms of an overall show. I enjoyed the improved production values, as well.