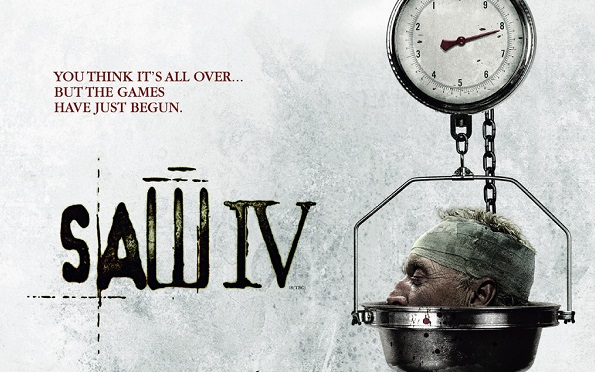 October Winners: Saw IV, Tyler Perry’s Why Did I Get Married?, Michael Clayton, and Dan in Real Life

As we continue into the fall of 2007 and coming off a pretty tepid September, it was going to be interesting to see how October would play out especially after last year when the Departed dominated the month. This year, there didn’t seem to be a film like that which would take control of the month and it was more than likely that horror would be back at the forefront which it was, though there were other genres that did fairly decent as well. Speaking of horror being at the forefront, the first winner of the month is the yearly tradition for October as the latest in the Saw franchise was released with Saw IV, which sees the Jigsaw Killer’s games continue while further information is revealed about his mysterious past. It was the fourth straight year that a Saw film was released on Halloween weekend and despite being the worst reviewed of the series to that point, it still made a solid chunk of money against its small budget though it would be the least-grossing film of the franchise to this point. The next film released this month that is able to make it into this category is Tyler Perry’s new entry Why Did I Get Married?, a film based on the play of the same name where married friends come together and deal with their relationship issues. Despite having some middling reviews from critics, it was in a good spot with not a lot of romantic comedies being released and would play pretty decently over the month though it was on the lower end of Tyler Perry’s works. The third film released this month that gets included in this category is the thriller film Michael Clayton, a film which sees a lawyer deal with the corruption going on at his law firm. Buoyed by a solid performance from George Clooney and receiving great praise from critics, the film would have a good run though I’m sure that they hoped it would have a better run heading into the new year and the award season where it was expected to do very well. The fourth and final film released this month that makes it into this category is the comedy drama Dan in Real Life, a film that sees a widower head to his yearly family outing with his daughters to reflect on his current situation. Coming out the same weekend as Saw IV, this seemed like the perfect counterprogramming film and had some decent reviews, but again it seemed like this could’ve done slightly better as it wouldn’t make much more heading into November. While it seems like the month has done very well by having four films be declared winners, when you dig deeper it is a bit of a disappointment given that Saw IV was the only film to make over $60 million and nothing broke out when it had the chance to.

October Losers: The Heartbreak Kid, Across the Universe, Elizabeth: The Golden Age, and the Seeker: The Dark is Rising

One of the things that has been pretty rare since these recaps started back in May 2006 was that the winners and losers category would have the same amount of films in both of them. Usually one category would have more than the other, but for this month we had four winners of October 2007 and now we have four films that end up being the losers of October 2007. The first film from this month that gets into this category is the romantic comedy the Heartbreak Kid, a remake of the 1972 film of the same name which sees a man realize that he has nothing in common with his wife and attempts to end it while pursuing another woman. The film would receive harsh reviews from critics with many calling it one of the worst films of 2007, and it would end up stumbling out of the gate and never really recover with several other films geared towards adults coming out as well. The next film released this month that ends up being a loser is the musical Across the Universe, an original film based on the songs by the Beatles. Much like a few other films released this month, this film also received mixed reviews and it had also been slated for released in 2006, and despite receiving a few award nods and featuring the music of the greatest rock band in history it would fail to find an audience and faded pretty quickly from theaters. The next film released this month that is included in this category is the period drama Elizabeth: The Golden Age, a film that dramatizes the latter part of Queen Elizabeth I’s reign and the war between England and Spain. The film was not well received by critics though Cate Blanchett’s performance as Elizabeth was praised, and despite receiving some award nods it was not enough for the mainstream audience to accept it and it would end up disappointing as it finished well below its 1998 predecessor. The fourth and final film released this month that makes it into this category is the fantasy film The Seeker: The Dark is Rising, based on the second novel of a five-novel series where a young man finds that he is the last of a line of warriors and must travel back in time to stop an evil force. The film would be panned by critics and by fans of the novel and would end up having one of the worst debuts for a fantasy film, and things didn’t get much better as it wouldn’t even crack double digits in terms of millions of dollars made. It was very interesting to see the diverse amount of films released this month that tried to cater to different audiences, but in the case of these four films there was no general interest and that’s why they are ultimately the losers of the month of October 2007.

The Surprise/Story of October 2007: Saw IV slashes its way to the top of weak October 2007

As I mentioned at the beginning of the review, last October was mainly dominated by the Departed which would end up being one of the bigger success stories of 2006, and as we headed into October 2007 it would be interesting to see if the same thing could happen. However when the films started coming out throughout the month, it was clear that lightning was not going to strike twice and that this month was not going to have a saving grace to keep the slight momentum that September had going coming out of the summer. After the horror genre had to take a back seat the previous year, horror is back at the forefront for October 2007 as Saw IV ends up taking the crown and finishes at the top of the month with just over $63 million. This was pretty much on par with previous Octobers in that this month was usually a dead spell between the summer and the holiday season, and that was on full display here as Saw IV finishes with a little more than January 2007’s number one film Stomp the Yard and now the pressure is on the holidays to try and end the year 2007 on a high note.

As I have said on previous recaps, sometimes when it comes to choosing an overachiever of the month I have to go with the one that is the most obvious and when there are no other viable choices to choose from. When I have to do this, the pick may seem pretty weak on the surface especially when comparing it to the other overachievers of the year, but sometimes there is no other option available and we have to go chalk for the category. In this vein, the overachiever for the month of October 2007 was really no other option and that is of course Saw IV which as we know finished at the top of the month. This was an interesting month in that the only other horror film released this month was 30 Days of Night which had potential, but ended up falling a bit flat and wasn’t able to gain momentum once Saw IV came out. As mentioned last year, the Saw films were usually made fairly cheap so by this point it was almost a given that it would be the overachiever of the month, but it will be interesting going forward if the same holds true if the franchise continues on after this.

Underachiever of October 2007: Across the Universe

This is an interesting case when it comes to choosing the underachiever of the year as there were a pretty decent amount of films released this month that got mixed to negative reviews from critics, but still did fairly decent while those that were well liked from critics didn’t do well at all. Having said that, most of these films weren’t expected to completely break out and set the world on fire so choosing a film to be the underachiever was pretty tough, but in what may seem like a strange choice I will go with Across the Universe to be named the underachiever. I had been working at my theater as an employee for eight months by this point and the trailer for this film was looped constantly on our ad TVs in the lobby so it received a lot of buzz in terms of views. In addition to pretty much being based on the song library of arguably the greatest rock band in history, it seemed like this could be a surprise hit of the year going into the award season. Ultimately, the reviews were pretty mixed from critics though some did praise it very well and despite having a solid start on the limited market, the film would fail to find the mainstream audience it needed and ended up being a pretty big disappointment which leads it to being named the underachiever of October 2007.

October 2007 Awards Watch: Michael Clayton, Across the Universe, Gone Baby Gone, Into the Wild, and Elizabeth: The Golden Age

So overall, October 2007 ends up being a pretty down month as it is nowhere near what October did last year and even for this year it is not good. October is typically a dull month to begin with between the end of the summer and the upcoming holiday season, but this year in particular was just not good as all the momentum the summer had is pretty much gone by this point. As mentioned, there was no film this year that ended up breaking out of the pack like last year when the Departed came out, and aside from Saw IV which itself didn’t do much and the rest of the field ended up being tepid or flat out bad. 2007 has been quite a roller coaster ride as the year started pretty bad, picked right back up in the summer with some big films and now we are back into a nadir with every weekend from this month being down from the previous weekend. As we head into the next to last month of 2007, we now look to the upcoming holiday season to try and save the year by ending on a high note or if it would fall flat and end the year on a down note. As for the month of October 2007, it is not a good month that ends up being one of the worst months of the year and one of the worst Octobers in history.