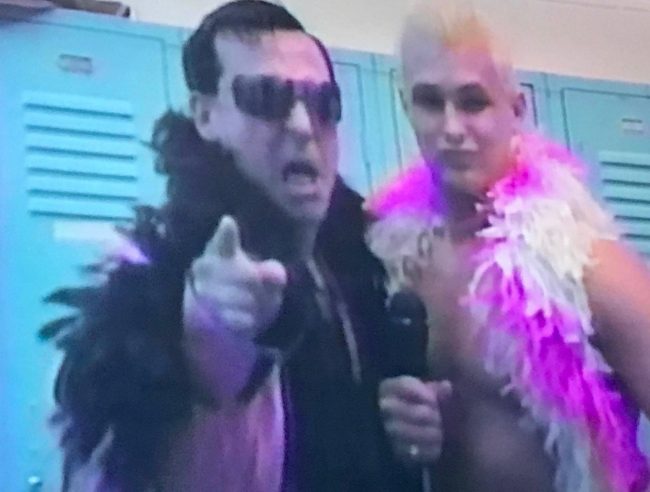 We had a couple of good matches tonight but I really enjoyed Eddie Gilbert strutting out and calling off Osbourne vs. Bellomo so he could introduce Don Muraco to his stable. Muraco and Snuka had a good promo later and then a fun squash too.

I will go with the Suicide Blondes as I thought they looked really good in their promo and match. It is a good use of Hotbody and a strong way to introduce Candido.

That Superfly Snuka and Don Muraco would ever be friends and teammates in the same stable.

Hunter Q. Robbins has a tremendous leather jacket on, a jacket that was likely never sold again after 1993. He also offered $500 to Winters & Stetson if they could defeat the Super Destroyers. That feels like a very early 90s amount of money. Also, Winters and Rebel’s mullets always get a nod here.

Jay Sulli looks so uncomfortable in that tux; We kick off with our now regular tradition of Eddie Gilbert coming out and talking shit to Terry Funk; I can’t stop being offended by the hair of Larry Winters; I love Sulli never giving any fucks over which Super D was in the ring; The Madman from the Bad Lands; The audio on this episode is rough to hear thanks to the way everything was miked up; Chris Candido’s introduction was well done and he is a good fit with Johnny Hotbody, forming the Suicide Blondes; Wonderful calls J.T. Smith the “soul brother of the team”;  Smith has a real nice moounsault; Muraco has gotten fat but is moving around well here; HD Ryder is a mess out there; I love that Stevie always calls out and corrects any slip up by Sulli; Stevie sets the trend of saying “meow” and making other cat noises during a catfight; Sandman and Rebel had a solid little match but it ended too quickly and could have used a better ending