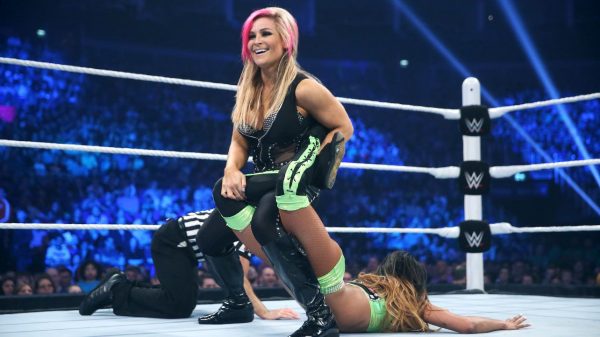 They debuted on WWE TV within two months of each other, all the way back in 2008, and have been trucking along ever since. The true survivors of the women’s division. They’ve naturally crossed paths a number of times over the years, and let me tell you what.

This is my favorite pairing in wrestling.

Nattie and Foxy were born to wrestle each other, in a way few people were ever born to wrestle anyone. It’s magical, it’s mystical, it’s transcendental. It defies explanation and yet makes perfect sense. Pure chemistry, on a molecular level.

No matter what they’re both doing, whether they’re faces or heels, being pushed or not, whether they’re even having good matches with anyone else, whenever Nattie and Alicia lock horns, sparks fly and the earth moves.

Honestly, if WWE hypothetically let me book any match I wanted tomorrow, order any possible combo off of the most stacked women’s roster in company history, all I would want is a 15 minute Natalya vs. Alicia Fox match. Straight into my veins. They’ve had 21 singles matches on television at this point, and all I want is more.

I’m not sure how to begin explaining why this is, but I think one significant factor is how well their wrestling styles mesh together. Natalya is the world’s greatest house show worker. She knows the basics so well and loves doing the kind of light hearted, comedy-adjacent spots that make house show matches so much fun. Put her on a live event or a C Show and she will have an absolute ball.

Alicia Fox, on the other hand, is the world’s greatest headphones worker. What I mean by that is that you need to have the sound all the way up to hear all of the crazy, hilarious stuff she says in the ring. She’s a talker. The female Mark Henry, except instead of mean trash talk, it’s just batshit insanity. So she’s also the kind of worker who comes off best watching from ringside at a live event, or with the creative freedom of a C Show. It’s no surprise that their best matches together were on Superstars.

The first few times they squared off were criminally short, but showed so much promise. I’m not sure how to explain this but even the way that they locked up with each other was great, like you could tell they really meant business with it. So there were a couple of quick teases, just to get me going for what was to come.

And then, the first time they got significant time to wrestle – on Superstars of course – they had such a monumentally great wrestling match that it blew my fucking mind, and maybe a few other organs too. Holy shit. The way that they fought and struggled over every hold, the way that everything they did physically made sense and built the match brick by brick… argh. I need some water. This is some sexy pro wrestling.

I mean, Nattie ran so damn wild on the comeback that she picked up Alicia Fox and suplexed her so violently that she ended up suplexing herself. The Sharpshooter kept getting blocked so finally Nattie found a way to apply it on the ground from underneath to prevent a counter. Double argh. From start to finish this was just such great wrestling, in the purest sense. 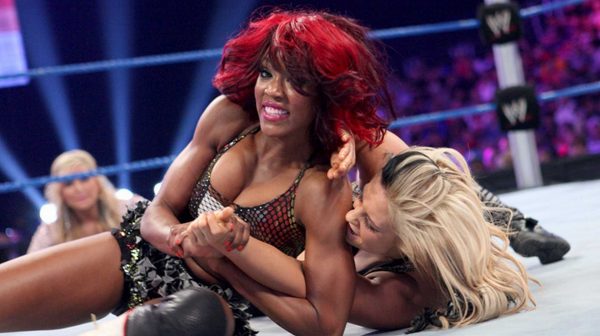 Next came their magnum opus. A match based entirely around Alicia Fox literally getting her wig snatched.

You DEFINITELY need the headphones for this one. It is a match that was wrestled verbally as much as it was wrestled physically. Early on Nattie rips a part of Foxy’s weave out, and this is what the match becomes about. Nattie laughs and gloats and waves it around. Foxy flips her entire lid and goes off her head screaming all sorts of stuff:

This match is a whole damn conversation. Fox also exacts her revenge by taking over, giving REALLY AGGRESSIVE NOOGIES in the headlock, and, oh, BITING NATTIE’S FINGERNAIL CLEAN OFF AND SPITTING IT IN HER FUCKING FACE.

This thing is WILD.

I don’t just need water after this one, I need a cigarette. This is the kind of ridiculous, hilarious, happy fun time wrestling that I would mainline into my soul if that wasn’t physically impossible on any number of levels. The perfect combination of wrasslin’ and bullshit. In other words, the C Show Special. I’ve watched this thing countless times, and I’ll keep gleefully watching it until the day that I die. In fact, my cause of death will probably be this match.

Those are the big two that definitely stand out above the rest, but seriously, all their matches are good, with the exception of those that are just too short and abrupt. But even those ones are still the best 45 second or 60 second matches you’ll ever see. Even the rematch from The Wig Incident, for example, clocked in at just 2:43, but included Nattie pulling Foxy’s belt off, a slap battle and a sick finish, and I motherfucking DARE YOU to find a better sub three minute match.

They had the first ever women’s match on the short-lived but delightful Saturday Morning Slam, and that was their most light hearted, goofy, PG romp. Then there’s one they had during Alicia Fox’s crazy run in 2014 (more on THAT later, believe me) that was all about her insanity and Nattie dealing with a mental patient. The last singles match they had pre-Revolution was different again, this time the gritty, nasty brawling version.

Whatever route they go with it, they’ve never had a bad match. It’s a remarkable batting average.

There’s just something about them together. We live in the era of over saturation; WWE has a million hours of TV every week and endless rematches for no reason are not uncommon. One thing that the wrestlers can do to mitigate this is to make their matches not only feel different every time, but also feel part of a larger, coherent whole as well. They throw in callbacks to previous matches, counter moves and finishes that worked before, and then come up with counters to the counters. They make it seem like they’re actually learning from each match with one another, building a rivalry, and thus, it gives these matches some purpose and meaning. Basically, they act like they’re feuding, even if the company isn’t acting like they are. 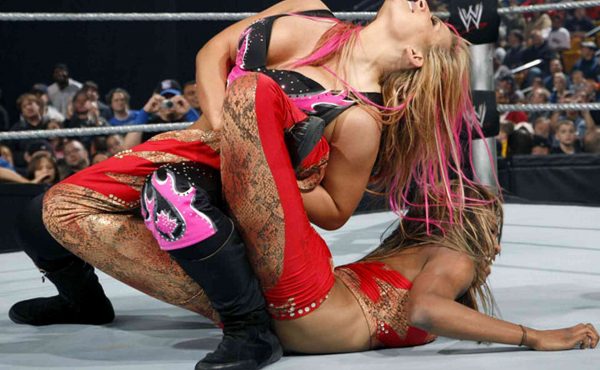 Natalya and Alicia Fox always act like they’re feuding. Foxy has come up with so many counters to the Sharpshooter over the years that it’s always amazing when Nattie can get it on first go. Foxy also often sees Nattie’s kip up coming, and BOOTS her effin’ head off for having the AUDACITY to try that ish on her. They LOVE to slap each other and get sucked into these slap battles. And of course, ever since The Wig Incident, whenever hair comes up in one of their matches it is A Big Deal. Never forget.

These two know they’re feuding. When they randomly cross paths with each other, in a tag team match or whatever it may be, they are always so visibly excited to get it on, on a level above if it was anyone else. They know. And then they lock up, like only they can, and just go to town. And they’ve done so since 2009, right up until literally today as I write this.

Full disclosure, as of right now I haven’t seen their Mixed Match Challenge match yet. But I am hopelessly excited to get to it. The great thing is that they’re both currently on the Raw roster, and on different sides of the fence, so the possibility is there for more and more matches. My dream match is tantalisingly within reach again.

Please WWE. Give ’em 15 minutes and I’ll never whinge about Shane ever again.

I’ll certainly have more to say about both Nattie and Alicia Fox in the future. There’s a lot of ground to cover still. But you know what, next week I might bite the bullet and unleash the piece that I’ve been brandishing as a weapon for the last two years. Be ready.