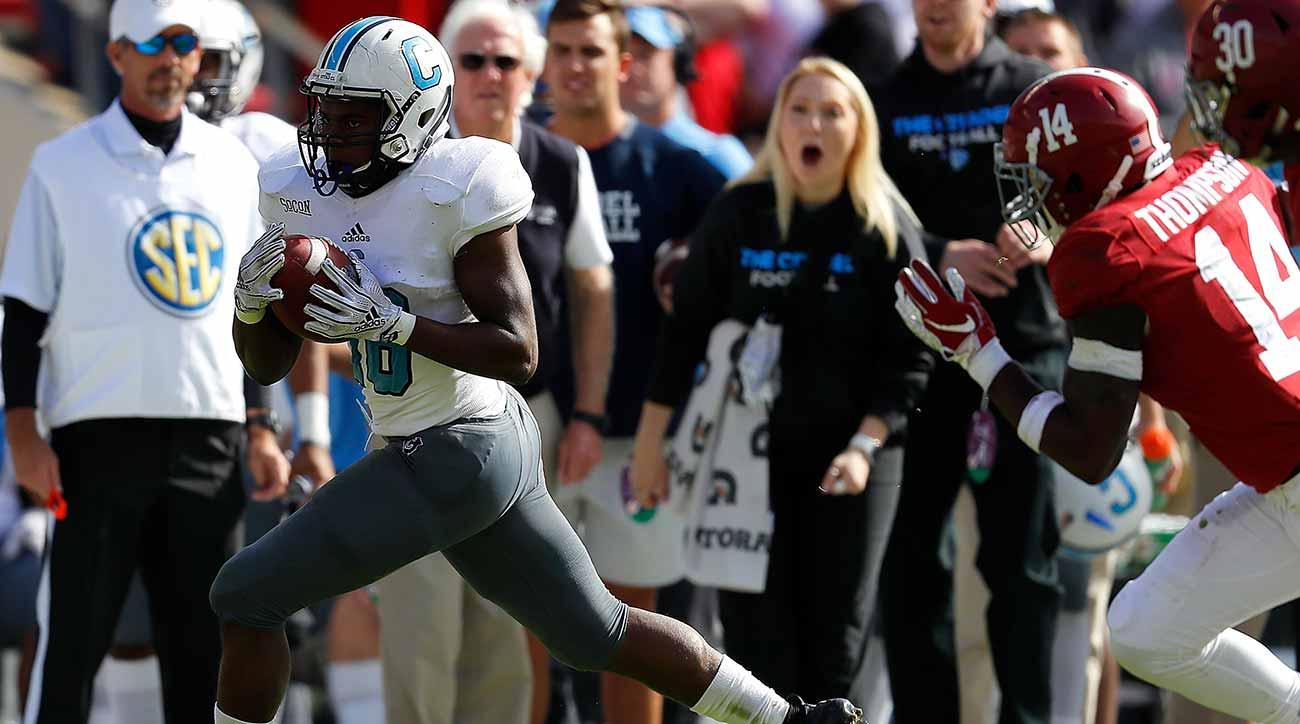 We are heading down the home stretch. Only two weeks of games remain (Well three, but Army-Navy is ALWAYS the last regular season game of the year). Were there major changes? Do those in Tuscaloosa, Clemson, South Bend & Ann Arbor still have tickets to punch? How about Athens, Pullman or even Orlando? Let’s check out the HOTTEST of Hot Takes!

ND upset? NOPE!: Everybody thought Syracuse was going to be the toughest game to date for Notre Dame if they intended to keep their spot in the Top 4. Well, Syracuse lost their starting QB early, and didn’t put up much of a fight after that as ND cruised 36-3. They’re one win away from their second undefeated regular season this decade. I wonder if certain SEC teams were watching ND beat up a top 15 team while they were having their mid-November scrimmage with the juggernauts from The Citadel & UMass.

Clemson played an actual conference game!: So, as most SEC teams hopped out of conference to play powerhouses like Idaho, Clemson was home taking on a decent 7 win Duke team. Clemson struggled out of the gate and trailed after the first period. But Trevor Lawrence rebounded to throw for 251 yards and two TD to give the Tigers a 35-6 win. Clemson has two games left: The Palmetto State battle with South Carolina & The ACC Championship against Pitt. Dabo is drooling for that rubber match with ‘Bama. As for the Panthers? Logan has more on them later.

Wolverines favored: While Ohio State BARELY escaped Maryland in OT this past week, Michigan also had a back and forth game before pulling away 31-20 against Indiana. For the first time in quite a while, it’s the Wolverines favored over the Buckeyes. Perhaps being in the Horseshoe may be OSU’s only chance to pull off the upset (Is being ranked #10 at home, underdog?) After letting the Terps push them around and almost beating them…in this case yeah it is. Urban Meyer’s been on the hot seat all year, and this COULD be his last game against Michigan.

The Pac-12 scramble: Things in Pullman have been “rosy” this year, as Washington State has had their best season in years. This weekend’s Apple Cup with the Huskies can seal the deal for a Rose Bowl berth. Can they make the Playoff? Sure, there’s an outside chance if some upsets happen. So yeah, Washington State fans actually have to root for USC.

Academies Update: Navy takes on Tulane this week after a 37-29 win over Tulsa snapped their 6 game losing streak. They take on Tulane this week. Army’s winning streak has reached seven after a 28-14 win over Colgate. Army is ranked for the first time since 1996. Air Force falls to 4-7 after a 35-27 loss to Wyoming. So, December 10 looms large. An Army win and they win the Commander In Chief trophy. Navy wins, and every team has one win. What happens?

Why Go for Two?: The title of this take is a question I seem to be asking myself weekly at this point in the College Football season. It seems like every week now a unranked team has a top team on the ropes most of the game, only to find themselves down a point with a chance to extend the game with a simple extra point. In at least the last two weeks Oklahoma State and Maryland have been faced with this decision and both ultimately decided to go for two. Trust me, I understand if it works then you look like genius but in both of these situations they were playing the vastly superior team tooth and nail and at some point you have to just trust your defense to eventually make a play. It’s an incredibly risk and reward situation and sometimes it may work in your favor, but in my opinion when you have a great teams already on the ropes trust your defense and don’t go for two until you have to.

Big 12 Title Update: The Big 12 picture became much more clear over the weekend. Iowa State now sees themselves on the outside with a loss to Texas. It now comes down to Texas, West Virginia, and Oklahoma. It’s real basic for West Virginia and Oklahoma, win and your in, only issue is they play one another. If West Virginia loses and by some miracle Kansas beats Texas then West Virginia would still make it. If Oklahoma and Texas win they will play once again. If West Virginia and Texas both win, both will have victories over Oklahoma meaning they would play each other. Should be an interesting watch this weekend to see who qualifies for the title game.

UCF Shines Under the Bright Lights: With College Gameday coming to town, all eyes were on UCF to not only show up but show out. If they wanted any chance of being considered for the playoff, they needed to do those two things. Well, under the brightest lights of they’ve ever faced they not only played up to their standard on offense but showed out on defense holding Cincinnati to just 13 points. While they still may not make the playoff, they were able to jump Ohio State in the rankings and succeeded in their goal of not only winning but doing so in convincing fashion.

Pitt Wins the ACC Atlantic: In a division basically set up for Miami or Virginia Tech to dominate at the beginning of this season, things went a little off course. While injury to star QB Josh Jackson may have squashed Virginia Tech’s chance of contending, Miami constantly under-performed all season and QB Malik Rozier didn’t live to his Heisman potential that people were putting on him to start the season. This paired with the fact that teams like division champion Pitt and second and third place team Virginia and Georgia Tech stepped up.
Ultimately Pitt has played some stellar defense and have run the ball incredibly well and did so with such success that they will now meet Clemson in the ACC Title game.

Fraternizing with the Enemy?: I won’t talk to much about the about the Mississippi State-Arkansas because it really wasn’t entertaining for very long into the game. Nick Fitzgerald threw the ball incredibly well totalling up 4 touchdowns, while adding another on the ground. The funnier and more entertaining story coming out of this game is the suspension of Arkansas cornerbacks Kamren Curl and Ryan Pulley. Suspensions are rarely comical, but the reasoning for these two is quite funny. Before the game these two players were supposed to be warming
up, but instead they were hanging out and flirting with Mississippi State cheerleaders. I hope taking selfies and flirting were worth missing the last game of the season, since the Razorbacks
will not be going bowling.

So, it’s rivalry weekend. We will give you all the big rivalry games (whether they matter nationally or not). Rivalry games are what make college football great.