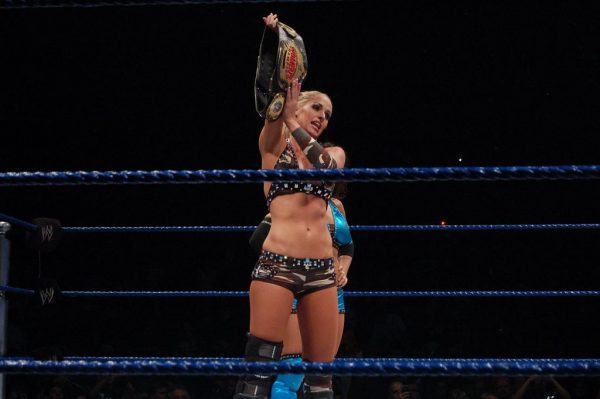 We’re coming up on the third anniversary of the Women’s Revolution reaching the main roster of WWE, and women have come a long way in the company since then. Of course there are still many ways to go on the road to real equality, but it’s nice to consider just how much respect the women get as wrestlers these days, from the company, from the fans, from everyone.

Because as we all know, it wasn’t always this way.

I don’t like starting off on a downer – like I said last week, this is going to be the most super happy fun time imaginable – but I think in order to get to the good stuff, I kind of have to get into all of the difficulties first. It may seem obvious, but when you line all of these issues up and see everything that the Divas had to deal with, you can appreciate how impressive it is that they managed to get any good wrestling done at all.

I mean, where do I start? Probably with time. It goes without saying but the women never got any time to wrestle. I’m not much of a maths guy but I’ve tried to come up with some stats to demonstrate how truly limited their time was.

The durations themselves are just the tip of the iceberg. They not only had to fight for every minute they got, but when a show ran long, the women were the first ones to get the chop. There are countless stories of the women being about to go through the curtain or getting into the ring only to hear “oh your five minutes just got cut to two”. Or they just got dropped completely; famously the Funkadactyls/Bellas mixed tag match was rissoled from WrestleMania 29 just as they were about to walk out, as seen on Season 1 of Total Divas.

The women were shut out of the big shows all too often – sure they usually do get a match at WrestleMania (because the show is 87 hours long), but there are a lot of SummerSlams and Royal Rumbles with no women’s match. For a lot of the PPVs, big Raw episodes or anniversary shows, either the women don’t have a match, or they’re all shoved into some 16 Diva tag team bout or Lumberjill match, something to get maximum hot chicks on screen, and the match lasts about 90 seconds – if they’re lucky.

Every show that they’re on, the women are in the worst possible spot on the card. They are, as the saying goes, the piss break. WWE just shoves them in the corner, because the matches don’t matter; they are secondary to the main purpose of having women on the show.

Which is, of course, to be sex objects.

The Divas Division was full of attractive women there to titillate the predominantly male audience (and perhaps distract from the fact that wrestling is a bunch of half naked men rolling around on the ground? Idk, I’m not your therapist.) Think of all the gross, hyper-sexualised things they had to do – Bra and Panties matches, Lingerie Pillow Fights, anything that happened in the blow up pool, catfights, bikini contests, swimsuit contests, dress up contests, dance contests… stripping for the crowd, Hot Lesbian Action, nudity, barking like a dog… just a constant barrage of objectification and degradation of women.

And the commentary sure helps, doesn’t it?

Jerry Lawler is famously the creepiest commentator of them all, and he could be downright abhorrent slobbering all over the announce table at them, but all the commentators did it because that is how they wanted to present the women. Now, to get into all of the sexist and patriarchal structures inherent in portraying women in wrestling (or women on TV in general really) is probably a longer conversation than we have room for here. But let’s all just agree that it’s gross. I know it’s something I’ve always just had to accept about wrestling in order to remain a fan (I think as women we do that with a lot of things in this world).

Back to the point, at the very, very least, it shows their lack of respect for the women as wrestlers. I lost count of the amount of times there was a Divas match in progress and JR or Cole were calling moves and King butts in and says “Why are you even bothering to call this match JR? Just look at these Divas! They’re so hot!” When they are flat out telling you: don’t bother with the match, they’re just pieces of ass… why are the women even bothering to wrestle?

It is astonishing in some ways just how hard all of these women worked when they got shit all for it. They’re out there taking the same bumps, putting their bodies through the same things the men are, but without the potential rewards that the men have to make it worthwhile: the big money, the top of the card, and the respect.

And speaking of bumps, there’s another aspect of WWE’s disrespect of women that never really gets talked about, but I think it should be, and it’s about the company endangering women.

What I mean by endangering them is this. Wrestling as a job is obviously dangerous, is extremely hard on the body, and carries great risk of injury. That’s why they have to be trained – learn how to take bumps and adjust to the physical trauma of hurling oneself at the ground, and learn how to give and take moves properly so they don’t hurt anyone, including themselves.

The problem is that in this era, particularly once they started the Diva Search, WWE would throw women on TV to do wrestling spots and have matches before they’d been trained to do so. This is incredibly dangerous, and frankly negligent. And definitely gender specific.

Think about it – they would never DREAM of putting a male wrestler who hadn’t learned how to bump yet even on developmental TV, let alone the main roster. On the other hand we have Layla, for just one example, who admitted on Twitter that the first bumps she ever took were on Smackdown during her first match. She had never even taken a bump before! Can you imagine.

So they’re already shortchanged on time, ignored by the company, objectified by everyone, and to top it off you have some poor girl being thrown to the wolves on live TV, trying to have a match that she has no idea how to have, for a crowd that doesn’t care, trying to look sexy, AND going through the physical shock of bumping for the very first time. That is insane.

Bear that in mind the next time you laugh about how clueless some of the girls looked when they started out. The poor kids were just trying not to break their necks.

And it’s not just the inexperienced women who were placed at risk. The amount of times I’ve seen the Divas doing physical stuff on telly in GIANT stiletto heels is mind blowing. No matter who’s idea it was to wear them, it’s not like you’d ever see men going out there wearing something so unsafe just because it’s sexy.

Or even something more ridiculous than that – I’ve never been more scared in my life than I was watching a stupid water fight between the Smackdown women in 2008. Michelle McCool, who was soaking wet, picked up Victoria, who was soaking wet, and held her upside down with only the grip of her slippery hands, while standing in a puddle, to give her the Wings of Love. I can’t even bring myself to make dirty jokes about them being wet because this was UTTERLY TERRIFYING. Victoria was fine, by the way, but it’s just another example of WWE putting their women wrestlers in needlessly dangerous situations, even beyond the needlessly dangerous nature of wrestling itself.

And they’re putting themselves in danger for a God damn water fight!

This is the struggle. It explains why, when I start talking about the good and great matches they were having, I’m talking about matches that might be 3 or 4 minutes long. That might not have a lot of heat. That might end abruptly. That might include sexy spots, or stupid outfits, or revolting commentary, or any number of things that aren’t designed to be taken seriously. It’s easy to treat these things as disqualifiers, but I prefer to just think of them as idiosyncrasies of the style, if you can entertain the idea of the “Divas style” being an actual thing. And I would argue it is, in the sense that their matches are structured and presented completely differently to the rest of the card.

So if I watch a Women’s Title match that goes three minutes and abruptly ends on a rollup, I’m not going to be mad at it for not being a 20 minute epic title match, because I know that’s not what a Divas match is ever going to be. You have to go by the standard. People like to use the phrase “grading on a curve” when they don’t like women’s matches being rated highly (I get it a lot) but it’s not about giving anyone a free pass, it’s just about judging a thing on its own merits. By its own standards.

And it’s not like I wouldn’t have wanted these women to be having 20 minute epics. I mean, my dearest wish is still to be able to mass teleport all of the Divas into the current era where they could have real wrestling matches and get time to have them. (I got a taste of it during the first Women’s Royal Rumble match back in January, and as you can see, I don’t want to overstate it but nobody who has ever lived on this earth has ever been more excited about anything else that has ever happened.)

I don’t think a single woman from the Divas Era reached their potential as a wrestler. How could they? They were all making the best out of the hand they were dealt. They were all born a generation too early. But it’s not like the potential wasn’t there. They had talent and you can see it in these little glimpses that we get, and just think about the degree of difficulty in making something remotely good out of these ridiculous circumstances. Degree of difficulty goes a long way with me when it comes to rating wrestlers, and these women had it maxed out for them.

I apologise for teasing you all with another general piece, but I thought it important to show what we’re up against. Next time I’ll definitely be doing a big swan dive right into it, I promise, with a wrestler that I think we all love already, one that I loved already, but now I love her so much I think she should be canonized by the Pope for performing wrestling miracles. There’s even a clue in this piece as to who that is…