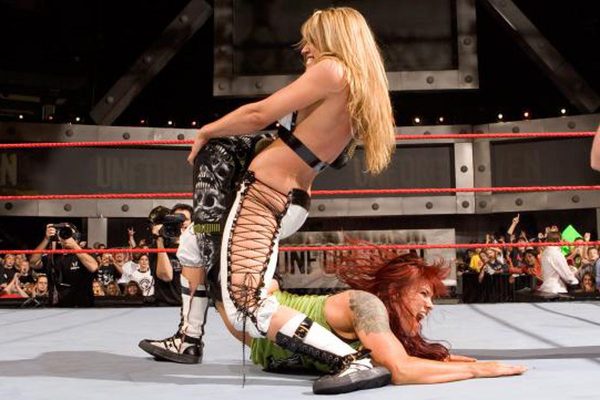 Welcome to the start of a brand new series here on the Place to Be Nation: Stacey’s Divas Deep Dive.

I am the aforementioned Stacey, and if you know me at all from the Place to Be Nation or Pro Wrestling Only communities, you probably know that I am a lover of women.

Women’s wrestling, that is.

If you don’t know me, then suffice to say I am hopelessly devoted to women’s wrestling in WWE. That may not sound so strange these days, but I grew up with wrestling in the 2000s, watching the Divas, and despite having every reason in the world not to, I have always loved them. They were girls… I was a girl… well the similarities ended there because they were all impossibly beautiful dolls and not exactly relatable, but I could certainly identify with being a woman in the male-dominated world of sport (WWE being sport-adjacent I guess). I saw them. The Divas are my girls.

I did some podcasts and written material on PTBN about various women candidates during the Greatest WWE Wrestler Ever project, and had a blast. I’ll take any chance I get to talk about these women, and if it piques anyone’s interest when I do I think the reason for that (besides my unhinged levels of enthusiasm) is that it’s an aspect of WWE that never really gets talked about much, in terms of the actual wrestling.

During GWWE some people were asking what Trish Stratus’ best matches were. Trish was the biggest star of the Divas Era with the most high profile matches, and yet when it came to evaluating her as a wrestler people still weren’t sure where to start. And that’s just Trish, let alone any of the other women.

We as hardcore wrestling fans take the canon for granted; we all know without much thought what the greatest hits are for someone like Shawn Michaels, or what the best men’s matches in company history are, or what happened at which WrestleMania. But there’s not much canon to speak of when it comes to the pre-Revolutionary women in WWE. Which makes sense, I guess. How would you know what the matches were like when you were in the bathroom?

Well this is where I come in!

I am here to bring the Divas Era to you.

I have spent the last 18 months rewatching and reviewing every televised women’s match in WWE from July 2000 to July 2015. All 1,508 of them (you’re welcome). I started with the first Trish vs Lita singles match, and ended with the Women’s Revolution segment on Raw where Steph introduced the Horsewomen. They seemed like the right bookends for this period.

I’ve been on quite a journey with this project (a deep dive, if you will) and I want to share it with all of you.

Every week I’ll be bringing you the best and the brightest of the Divas Era: the top matches, the best wrestlers, big feuds and storylines, great runs of work, and all manner of wild and wacky and wonderful things in between. If you’ve ever wanted to know the psychology behind Bra and Panties matches, or if it’s possible to have a ****+ Lingerie Pillow Fight, stay tuned.

On a more serious note I will be recommending a bunch of good matches to check out, and I will endeavour to shine a light on as many of the women as I can and show you their bodies of work, or even just a snapshot of what they could do. If I can get you consider these women as simply wrestlers for a minute, see them as I see them in some small way, I’ll consider that a job well done.

If all of this sounds overwhelmingly optimistic and a bit preachy, well… I guess it is. I make no apologies. I don’t really know any other way to be. If you’re after a sober, balanced, measured view of… well, anything, you’ve come to the wrong Stace. I experience wrestling very personally, emotionally, and I can’t help but write it like that as well. So take my insanity with as many grains of salt as you require, I’m just one dude with opinions after all, but just know that I’ve done the homework. I ain’t making any of this up.

Besides, it’s easy to shit on the Divas or dismiss them. That’s boring. I find it far more fun to talk about good wrestling, rather than bad, and I find it far more interesting to look at the good wrestling that did take place in overwhelming circumstances, rather than drag them for all of the obvious reasons. So this is going to be a super happy fun time. You’ve been warned.

Thanks for reading this far, I hope you’re still interested enough to come back next week, when I’ll be exploring a topic very close to my heart: all of the utter bullshit that women have had to put up with in WWE.