I’m back after a week off spent trying to recover from Evolution. It didn’t work because I’m still not over it, but we soldier on. In case you missed it, my thoughts on the PPV are out in various forms: written, audio, and stark raving psychotic break.

A lot of Divas got some shine on that show, but I want to talk about someone who wasn’t there. Candice Michelle is one of the best success stories of the Divas Era, and maybe one of the more unlikely.

The first thing I can remember Candice doing in a ring is taking a fake bump. I’m not sure how exactly to explain what a fake bump is, but if you watch her referee this pillow fight, you’ll see one. Actually, don’t watch it. All Candice really does in her first few months is have some of the worst matches of all time, but as I’ve said all along, it’s not like that’s really her fault, and I only say this to emphasise how far she came from that point.

The first glimmer of hope was when Candice, Victoria and Torrie Wilson formed Vince’s Devils in 2005. Frankly, Candice is a BOATLOAD of fun in this group. By this time she had appeared in her ad, and her whole gimmick was that she was the sexy Go Daddy girl who danced around in a circle. And she worked it.

In the ring she’d often stop what she was doing just to start twirling into her dance, usually with her teammates screaming at her to pay attention as the babyface got away. One time she eliminated someone from a battle royal and landed on the apron, so naturally she celebrated right there by doing her dance and was of course booted to buggery.

Candice Michelle was basically Eva Marie a decade before there was an Eva Marie.

The more ridiculous Candice got as a heel, the better. She begun carrying a magic wand to the ring for no apparent reason, which even her mates thought was silly until they realised they could use it as a weapon. When her and Torrie began feuding over Playboy, she didn’t just come to ringside to distract her, Candice made a run in ON A GIANT BED LITTERED WITH HER PLAYBOY COVER BLOWN UP AS THE HEADBOARD CARRIED BY NAKED MEN.

Candice was stooging it up well enough, but the matches still weren’t really there. But when all the ex-Vince’s Devils feuds were over she turned babyface in the summer of 2006… WHOA MAMA.

By her literal second match as a face Candice Michelle was already weaving in and out of holds and busting out slick fireman’s carry takeovers and shit and, well… OK then! GIRL where has this been hiding??

For the next 12 months Candice just came on in leaps and bounds. Week by week, match by match. She was trying out all kinds of new moves, like popping up with a lucha-style springboard armdrag, or a dragon screw. BUT the key thing I want to stress is that it wasn’t just about her learning new moves or improving in a physical sense. It was about EVERYTHING.

The reason why that rando dragon screw popped me so much wasn’t just because it was cool to see Candice Michelle bust out a dragon screw. It was because she did it to Victoria, in the first singles match they’d had since Victoria kicked Candice in the head and shoot broke her nose in a battle royal. Victoria was trying to boot her face off and break it again, but this time Candice was ready for it, caught her leg, and from that position used one of the new moves she’d been learning to take her down. Ergo, improvement, both in kayfabe and as a real life worker. It was perfect.

The point I’m trying to make is that “Wow Candice Michelle has improved!” wasn’t just a catchphrase they used to sell her title push. It was an entire package, an entire confluence of events. She brought in new moves. She learned how to take a beating and come back from it. She learned how to counter things that had happened to her before. She developed some fighting spirit and would make these super fiery comebacks and seek righteous babyface revenge. She would win matches and literally SCREAM OUT LOUD in triumph after the three count, because she wanted it so bad.

She got so ridiculously good so quickly that every week JR and King would sit there incredulously going, “Who is teaching Candice Michelle these moves??” (Finlay. Fit Finlay is the answer, and speaking of Evolution they really should be talking about Finlay more.)

Anyway, all this improvement was reflected in the booking as well as she started to win more and more matches, and these TV victories lead to her earning a Women’s Title shot. And she DID earn it, right before our eyes like few people have ever earned one. And then when she got there, she won the title too. She was on a ROLL – in kayfabe, in reality, in every respect.

I spoke at length about her title win vs. Melina at Vengeance 2007 from Melina’s point of view, about how her inability to capitalize on the moment of opportunity inevitably lead to her losing. In turn, the fact that Candice was on such an unbelievable roll made it inevitable that she would be the one to figure Melina out. It was the only finish that made sense.

I’m a sucker for when storylines and booking and in-ring work all come together seamlessly like this. This is one of those times.

It continued after she won the title as well, as Candice became more and more confident and really grew into the role of champion. She stood up for herself when challenged, and was still adding new moves by the week. She also looked like she was having the time of her life. 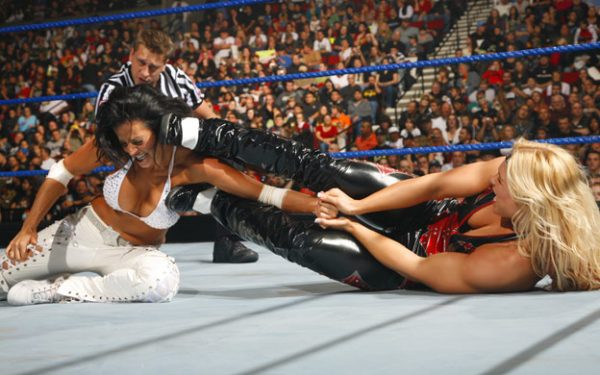 AND THEN THE BETH FEUD.

Candice Michelle MADE Beth Phoenix. I will sing this song anywhere I go, one more time for the people in the back! Candice. Michelle. Made. Beth. Phoenix.

Just ask Beth, she’ll tell you. Or better yet, ask me, and I’ll tell you using a lot more words.

Beth Phoenix returned to Raw and got the monster heel push in the summer of 2007. At this point she was still a little stiff, a little awkward, a little unsure of her own strength. By the time Candice was done with her Beth looked every bit the Glamazon, powerful and confident and all conquering.

Their title matches are simply amazing big woman vs. little woman scraps. Candice positively HURLS herself at Beth, and Beth hurls her right back. Candice is the driving force in all their matches, carrying them with her stick-and-move offense, her babyface selling, and pure emotion.

AND, speaking of that whole ‘Candice learning new stuff’ thing, their first title match at Unforgiven ends with Candice busting out a crucifix pin (yet another new move!) and rolling Beth up for a three count, as JR points out that Candice beat the monster with the wrestling technique she’s been learning this whole time, and I point out that ARGHSKFJSKFK I LOVE WRESTLING!

But Candice holding onto the belt felt very much like staving off the inevitable, and sure enough, Beth got her rematch. At No Mercy, Candice tried with all her babyface might, throwing everything she could at Beth, but she couldn’t find a way to beat the monster this time. She was caught, and splatted.

They had a rematch on Raw, the history making, first time ever, all women’s 2/3 Falls match. And it was fucking AWESOME. Beth powerbombs her and folds her up for the first fall, and Candice, on her last chance and down to her last fall, just Candices Up and runs absolutely wild on Beth. She unloads every move she can possibly think of, desperate for a fall, until she goes up top, Beth knocks her off and she falls to her horrible, gruesome death. Obviously not literally, but she did break her collarbone and it absolutely sucked. Beth has to just pin her and Candice leaves in agony and heartbreak.

I’m even more devastated by this now than I was then. Candice was on such a roll, literally one of the most unlikely workrate runs in wrestling history. And she looked like she was having an absolute ball every week. This injury came at the worst possible time, and unfortunately ended up derailing the rest of her career as she continued to battle the bad shoulder.

But let’s talk about the rest of her career. I think prevailing wisdom is that when Candice eventually came back she just wasn’t the same. I am here to tell you that this is UTTER BULLSHIT.

OK, admittedly, her actual comeback match was a bit of a shitshow. In fact, a lot of one. It was a tag match and Candice came in and made honest to God the worst hot tag I’ve ever seen. She botched everything she tried, to the point where WWE couldn’t show any replays of the match after it was over. This was not a good day at the office.

This jibed with my memories and I concluded that the injury had fucked up Candice for good and she’d never get back to 2007 Candice. I certainly wasn’t looking forward to her upcoming PPV match with Beth, this time at No Mercy 2008.

Well guess what my dudes?? That PPV match was AWESOME!

It was as if the last 12 months were a dream and we were straight back in October 2007 with Candice working out of her skin. She was showing out here, once again running around Beth, throwing the kitchen sink at her, and selling her bad arm like an absolute motherfucker. Then she makes a sick one-armed comeback and dropkicks Beth in the fucking face for good measure (I’m a sucker for a dropkick to the face). Beth herself always looks good against Candice, and this whole thing huffed and puffed and blew me the hell away.

She continued to look good from then on. There’s a trios match later in the year (Melina’s own comeback match) for example, where Candice does things like pendulum kicks and the bridging-out-of-a-pinfall escape like a fair dinkum joshi worker. She was partying like it was ’07 every week and as it turns out, it was the hot tag from hell that was the anomaly. An entire reputation destroyed by 60 seconds of ring rust. 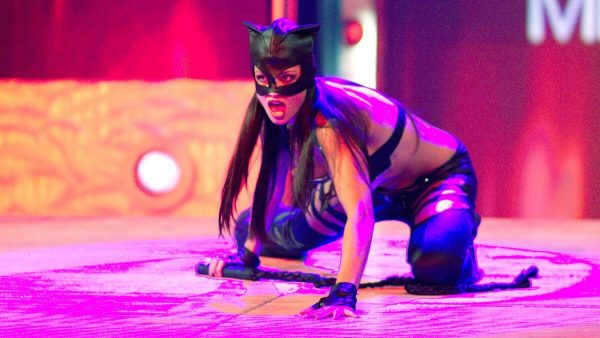 I’m rewriting the narrative. Candice could still GO right up until the end.

Sadly in real life the injury did keep fucking her up and she was pretty much done in the ring very soon after, and out of the company very soon after that. BUT, not before going one more round with Beth Phoenix in a banging TV match in early 2009. Good thing she was already injured beyond repair because in this Beth gives her a SLINGSHOT BACKDROP DRIVER TO THE FUCKING DEPTHS OF HELL that would have killed her anyway. Anyway, this was great once again, and Candice Michelle went out on her shield like an absolute soldier.

She was a soldier. Recruited out of the Diva Search as a model and starting from absolute zero, Candice really had no right to become as good as she did. But she wanted it. She worked and worked until she became a worker, against all odds. That is legit.

I’m so happy that some of my Divas got to be a part of Evolution, but a lot of them, like Candice, didn’t get that chance, so next week I might continue on with someone else who isn’t in the company’s picture, but deserves some mad props.