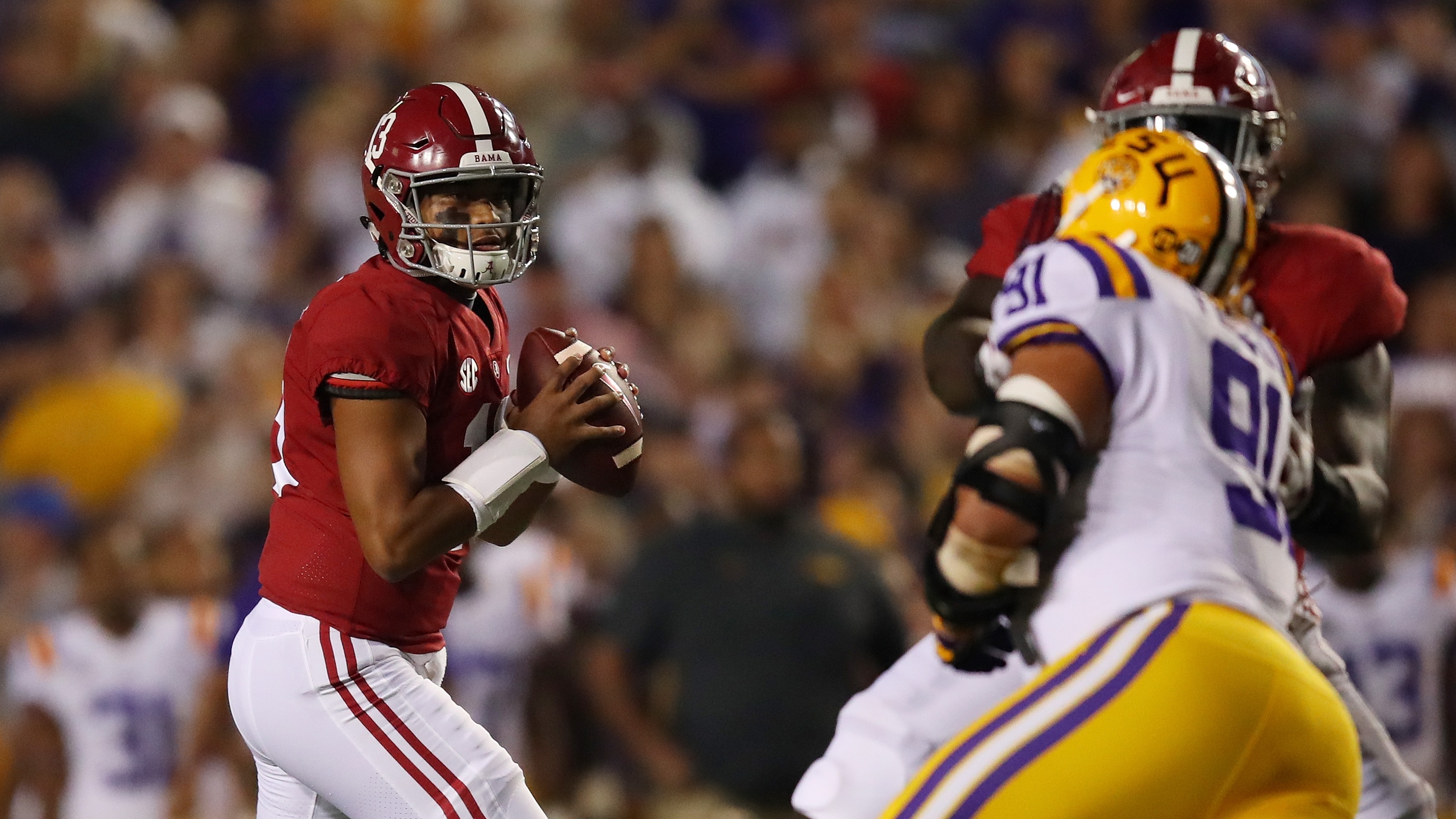 Well didn’t we have a busy weekend in college football! We saw one playoff team slide and one we least expected move up. We are in November, which means every game matters. So before we give you the latest standings & this weekend’s morsels, let’s check out the scorching Hot Takes!

Georgia Clinches the East: Georgia and Kentucky entered this game with everything on the line. The winner would be SEC Eastern Division champions and would stay alive in the playoff race. Kentucky, who has been incredibly impressive and a huge surprise all season, welcomed the Dogs to Lexington with the all their home fans hyped out of their minds. The Dogs though, were able to squash any hype or hope for Kentucky to make this a dream season. Georgia took 28-10 lead into the fourth quarter and that was just too much to overcome for Kentucky. Georgia would win 34-17 in the end and are headed back to Atlanta in December for another battle against the team I will talk about next for the SEC Championship.

Alabama Dominates…..Again: As with the game above, the Western Division of the SEC was also on the line on Saturday. Alabama could lock the West up with a victory, while LSU could put themselves in at least the driver’s seat to the division title. This game though, like the one above, was never particularly close. Alabama was able completely shut down any offense LSU could muster, only amassing 196 total yard (only 12 of those were rushing yards). As usual Tua was his incredible self and Bama’s defense was impressive as always, as the Tide shutout the
Tigers 29-0. Alabama will meet Georgia in the SEC Championship after the regular season ends in what will basically be a playoff qualifier.

UCF Passes Their First Test: As I’ve discussed in previous weeks, the American Conference is one that I’ve been become incredibly interested in. UCF is the class of the conference, as they are riding a 20+ game winning streak from last year and the only undefeated team left in the conference this year. This past week was the start of the most difficult part of UCF schedule facing the other top teams in the conference. Their first test came at the hands of the Temple Owls, who had recently knocked off previously undefeated Cincinnati. While Temple lead at the half of this shootout of a game, UCF was able to hold Temple to only one score in the second to come away with the 50-42 victory. UCF welcomes in Navy next week before finishing the season with Cincinnati and USF.

West Virginia Outlasts Texas: Two weeks ago, Texas was riding high. They had just defeated rival Oklahoma, they were ranked number 6, and were very much in a position where they could roll all the way to the Big 12 title game. Oh how times have changed? Coming off upset loss to Oklahoma State, Texas had a big opportunity to get their mojo back against fellow Big 12 favorite West Virginia. This game was quite the offensive showcase and might have very well been the game of the week. In the end with 16 seconds left to go WVU’s QB Will Grier not only
threw a touchdown but scored a game winning two point conversion to lead his team to a 42-41 victory. This doesn’t knock Texas out of the race but they need some help if they hope to win
the Big 12.

Mississippi State Rolls Ahead of Huge Test: Mississippi State’s offense has been a huge question mark and source of much worry among their fans this season. It seems like when they play the better defenses in the SEC they just can’t seem to muster much on the offensive side of the ball, despite playing stellar on defense. Well, for at least the last two weeks the offense seems to have found its stride. Granted one of those games was this week’s game against Louisiana Tech, but being able to move the ball that effectively on offense only goes to build the confidence of the entire offense and QB Nick Fitzgerald. They were able to dominate La Tech on the way to a 45-3 victory. Mississippi State now travels to Tuscaloosa to take on the
seemingly unbeatable Crimson Tide. While I don’t see any chance the Bulldogs pull off the upset, it will be interesting to see if the offense at least is able to stay somewhat effective or if it seemingly disappears like it has in all of their losses so far this season.

ND clears another hurdle: No. 3 Notre Dame looked as if it was running away with another victory, leading by 17 points early in the fourth quarter. Well it turned out the Fighting Irish needed one more big dash to secure it. Ian Book threw two touchdown passes and ran 23 yards for a score in the closing minutes to lead Notre Dame to a 31-21 victory over Northwestern on Saturday night. ND remained in line for a playoff spot and continued to build on their best start since the 2012 team went undefeated and went to the last BCS Championship Game. Book has been incredible since starting, and this week is a chance for ND to really pour salt into another teams wound when they host crippled Florida State Saturday.

Wait…that Michigan?: When I watched Michigan’s ugly season opening loss to Notre Dame, I thought it would be a rough year for Jim Harbaugh’s Wolverines. Well, turns out that was just a “slow start”. After Saturday’s 42-7 win over Penn State, Michigan has won eight straight and is in the Playoff discussion. Shea Patterson accounted for three touchdowns and the Wolverines put together a dominant performance on defense. The Wolverines moved a step closer toward their goals of winning a conference championship for the first time since 2004 and earning their first spot in the College Football Playoff. The team is following their head coach’s swagger, alluding to the fact they’d run up the score on PSU. The win streak should continue Saturday against putrid Rutgers.

Tigers trucking along: As for #2 Clemson, they just keep trucking along after throttling Louisville 77-16 Saturday to stay undefeated. There’s clearly a personal grudge between Nick Saban & Dabo Swinney, and many feel they want that game for the third year in a row for all the marbles. Clemson has a tough one this week up in Chestnut Hill against #17 Boston College. Speaking of Boston College, when was the last time they were relevant? Glenn Foley? This game does smell a lot like last year’s trip Clemson took to Syracuse. Swinney hopes for a better result.

Is there a clear cut team in the Pac-12?: Washington State’s 19-13 win over California has made the Cougars the clear cut team in the Pac-12. Not that it matters really. The league is full of mediocrity, with 4 and 5 loss teams all over the place. The Cougars have a tricky one this week at Boulder against Colorado, who’s struggled mightily but can get a win here. On the other side of the coin, Will Chip Kelly last long at UCLA? 2-7 is awful, and they’ve looked pretty terrible at times. And 5-4 isn’t a record that USC fans (or school officials) can be happy with either.

Academies Update: Air Force couldn’t seal the deal for the Commander In Chief’s trophy, losing 17-14 to Army at West Point. If Army beats Navy, they win the trophy. However if Navy wins (They already lost to Air Force), each team would have one win. What happens there? The Marines take it? The Coast Guard? An interesting conundrum to have. This week Army has Lafayette at home, Navy is at #12 UCF, and Air Force is home to New Mexico.

So here’s the up to date College Playoff Standings:

Now a look at the important games this weekend. Remember at this point every win and loss matters: