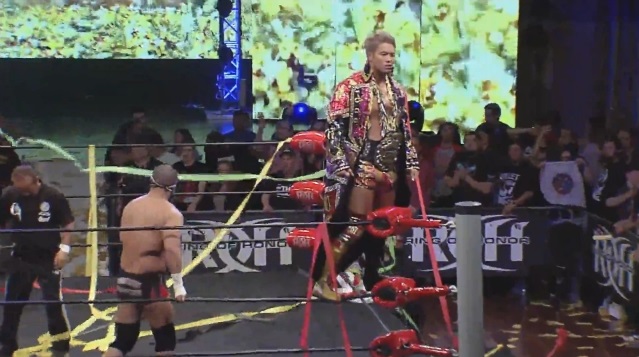 ROH Nation! Welcome to another Ring of Honor TV recap here at Place to Be Nation. The only ROH review that includes slightly blurry screen grabs from streaming ROH TV online! Before we get to it – be sure to check out the latest Kevin Kelly Show as KK is joined by author Chris Charlton to talk New Japan Pro Wrestling and his book. A special congrats to both KK and our friend Steve Corino on their gig calling NJPW’s Invasion Attack this month.

Before the intro we get a flashback to last week’s Dijak/Lethal confrontation, with Truth Martini suffering a broken neck due to Dijak’s kick. Lethal cuts a spirited promo, noting that if Dijak wanted his attention, he has it, but he doesn’t deserve a title shot nor to even be in ROH. As I noted last week, this is a weird spot for a lead heel to be in. Is there a double turn coming? Do people really want to cheer Prince Nana anyway?

reDRagon vs. Gedo and Okada

Oh hey, it’s the NJPW Heavyweight Champ, no big deal (while I am boasting on ROH’s account, they DO make it a big deal and the crowd is hot). Feeling out to start after Okada and Gedo are too cool to shake hands. O’Reilly works Okada and that’s a singles match I have to hope happens sometime in 2016. Okada goes for a sunset flip in the middle of the ring and Kyle slaps on the arm bar to a nice cheer. We get a weird ref distraction spot that has the ref tied up with Gedo while his man is being stretched. For some reason Bobby gets in the ring which draws the ref away and lets Gedo break it up and they take over – focusing on Kyle’s ear with short punches.

CHAOS maintains control before Kyle fights back with kicks on Okada and makes the hot tag. Fish’s shine is cut short by a nasty neckbreaker by Okada. Big elbow from the top rope as Mr. Wrestling III wonders aloud what this tag win would do for Okada and Gedo in the ROH tag rankings. I’m going to guess – not a whole heckuva lot, but I like the spirit behind wins and losses mattering. 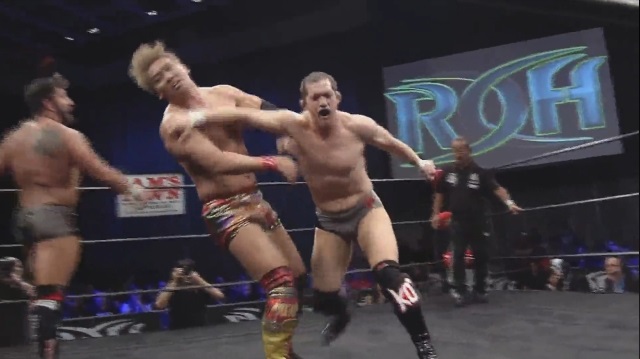 Rainmaker is ducked, but Gedo gets the tag first and cuts off Fish. Big dropkick by Okada, but reDRagon double teams Gedo into the corner. Close save by Okada but O’Reilly dumps him and they hit Chasing the Dragon on Gedo for the win. O’Reilly still sells the ear after like a pro.

Kushida was my show MVP for the 3/12 Conquest Tour stop in Philly. Enjoyed a (translated) interview he did that put over ROH and enjoying coming over whenever they ask. Sidebar: Chris Charlton in the aforementioned KK show interview made a good note that New Japan World should start putting ROH content on that involves their guys. Kushida/ACH was a good example of that. And after I typed this I see news that they put up the 14th Anniversary Show up so that’s real cool for their subscribers.

Kushida out-works Cole on the mat, slapping the back of his head and then mocks his pose. It’s on now. Cool spot early as off an irish whip, Cole drops down and Kushida just drop kicks him in the skull while he’s on the mat instead of jumping over him to the ropes. He grabs an arm and Cole puts over his submission by frantically going for the ropes right away. Nice. And then a personal favorite as Cole tells the fans in the front row to move and get ready for a big move and then he just rolls Kushida back in the ring and does the old forearm to the elbow flip off  (without the middle finger obviously) to everyone.

They do a nice sequence around the arm and then Kushida trying to block Cole’s superkick before Cole is sent outside for a huge somersault dive off the top rope by Kushida. Awesome. Back in, a running shining wizard by Cole gets a close two and I have to put over the little mannerisms by him in the match. Kushida grabs the arm in the Hoverboard lock and Cole throws Todd Sinclair out of the way to presumably pull Kushida’s hair or something to get the break. 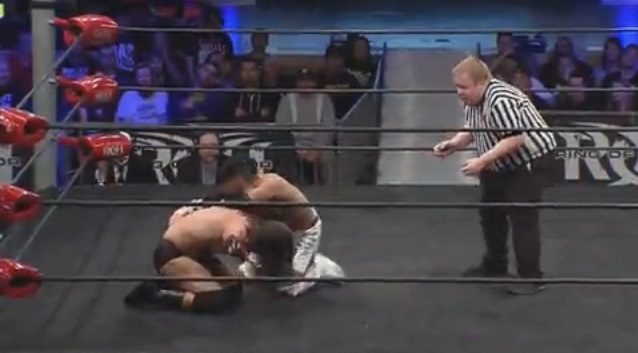 Cole fights again out of the armbar by going for a pin (KK notes just like how he won at Final Battle – THANKS FOR THE SPOILER FRIEND – ok fine it’s been 5 months but I did just get the DVD), but eats a big super kick from Kushida. Off the ropes Cole kicks Kushida in the back of the head, setting up his neckbreaker on the knee and Adam Cole BAYBAY is your winner. Heckuva match.

Dalton Castle promises to get crazy next week. Finally the Fight Without Honor is nearly here. 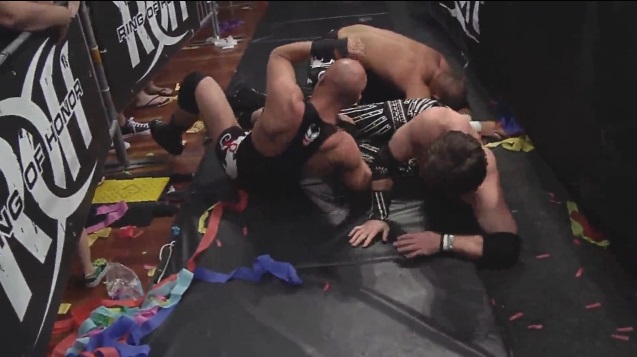 The Addiction vs. The Machine Guns

Given the build and the promo from a couple weeks back, this starts with both teams ignoring any kind of tag rules and just fighting. It results in a dosey-doe of sorts with both Guns getting splashes in the corner and then they throw Daniels into Kaz for a spear.

After we get some leap frog sledges, Nigel is always smart to note “it’s getting hot out there and slippery” to rightfully cover if a guy somewhat falls or misses something. Sabin crash and burn (see pic above) and the Guns look great so far. Shelley works punches from the turnbuckle and even takes the time to throw a kick at Daniels, knocking him off the apron. The General comes back and trips him up though and Kaz hits a backstabber off the turnbuckle. The Addiction really take over here as Kaz spits at Sabin, which draws him in and the ref over so both guys pound on Shelley. Nice transition there.

The Addiction isolate and work Shelley over and after a Kaz DDT and cover, Sabin runs in and breaks it and then races back to his corner before the ref can get to him and potentially lead to more double team offense from Daniels. Nice subtle touch. More tag team gold next after Shelley hits the combo stunner/DDT on both guys and heads for his corner. Kaz grabs him and he kicks him off but just as he lunges for the tag Daniels runs over and pulls off Sabin.

Shelley finally kicks free of the Addiction, hits a spinebuster on Kaz and a drop toe hold on Daniels, face-first into Kaz’s crotch. We get the hot tag, well-earned mind you, and a big crossbody by Sabin on both guys. Things get a touch tentative here, but Nigel is so smooth at covering, especially when Kaz has to wait for Sabin to dodge him on the apron. Big springboard spinning DDT off the ropes by Sabin on Daniels for two.

Very liberal refereeing here and Daniels hits a curb stomp-esque move off the top on Sabin and then just goes balls out across the ring and dives through the ropes on Shelley. That’s how you do things when you’re not the legal man. Celebrity rehab is missed, although Shelley is a bit late with the save. Everyone is pretty gassed at this point. Super kicks for Daniels and Shelley splashes Kaz on the outside to set up both Guns to hit the swinging neckbreaker / splash for the win. Great Guns reunion and man did the Addiction really hold this one together. Really good.

Post match the Addiction attack, but Kushida and Sydal make the save. The Young Bucks come out and throw some kicks their way before the Guns tackle and fight them.

Final thoughts: Perhaps lost in a loaded WrestleMania weekend of wrestling, this is maybe the best hour of wrestling ROH has put out this year. And next week is LOADED with the tag team title match set up by the gauntlet a couple weeks back, Kenny Omega vs. ACH and the Fight Without Honor. Great stretch here for Ring of Honor.