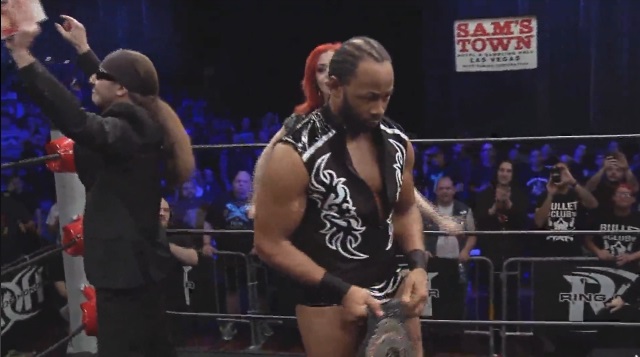 Welcome back to another ROH TV recap here at Place to Be Nation. Some quick ROH-centric housekeeping as always:

Adam Page’s new entrance video is cool but that music takes way too long to get going so it gets no type of reaction. Reminds me of Elgin’s old music in that sense. There is nothing at stake here but its a nice showcase of some big names. Moose at one point catches Sydal’s dive and attempted rana and powerbombs him on the apron. Shooting star press from the apron by Page for his normal good pop.

Sidebar for a Hot Take on ROH: Moose is facing Strong on night 1 of Supercard of Honor, the day before Strong and Bobby Fish finish their feud. I feel like this is potentially a pretty big matchup that is kind of thrown away here – presuming there is any kind of conclusive finish. Strong is a great guy for Moose to go over as he builds momentum to then next take out Ishii for the TV belt and finally Jay Lethal by the end of the year. That’s a substantial program that could be something done for Best in the World. Hoping this SCOH match leads somewhere.

Anyway, as noted above, this is a completely acceptable showcase and then here’s BJ Whitmer with a fairly tame distraction on the ramp, which stops Page and eventually allows Strong to take out Sydal and hit the knee on Page to score the pinball. This does the opposite of heating up Page for his revenge encounter.

Adam Cole story time BAYBAY and he’s confident he’s still the best wrestler on the planet despite recent losses. He pledges to the be the guy to take the belt from Lethal in a 1-on-1 situation. He states he’s without his kingdom and EXCELLENT SEQUE into The Kingdom’s music and here’s Matt Taven with one knee. Another sidebar: Taven ruled on commentary at the Philly show.

Taven buries Cole for blowing his chances at getting his title back and pulls out a good callback to Cole telling Taven he dropped the ball after the tag team loss at Final Battle. The Kingdom will be rebuilt in Taven’s image and he’s finished with Adam Cole. Taven plays this up on the 3/12 show also. Glad it seems he’ll be sticking around. He’s another guy who is a great legit heel to the ROH fans. I get keeping him in front of the cameras, but man he has to still be at least 6 months away right? 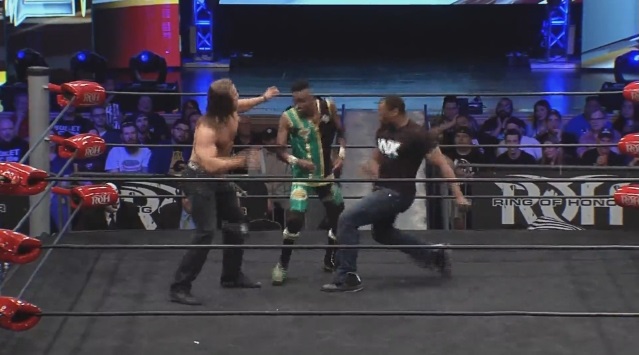 The All Night Express pull out and beat down Vinyer before Burger can hit the palm strike so, alas, we do not get a Cheeseburger TV win. Burger threatening people with the palm strike like he’s holding a gun at them is tremendous. ANX tries to coddle favor with Cheesburger, they like him and he is one of them, and then they note how the crowd doesn’t really care, and certainly doesn’t care about them and the sacrifices they make to their body. Same vibe as with Dalton at the 3/12 show – and it’s a good promo.

ANX breaks out “Wrestlers Read Mean Tweets” – hey, that’s pop culture relevant – and break out some possibly made-up tweets about how bad they are. After failing to convince Burger about how bad the crowd is, they start the beat down and out comes the Briscoes and War Machine for the save. “HE’S JUST A BURGER!!” by Mr. Wrestling III. KK notes it isn’t the fans fault ANX ran away when they were tag champs before. I totally dig this ANX heel act right now. 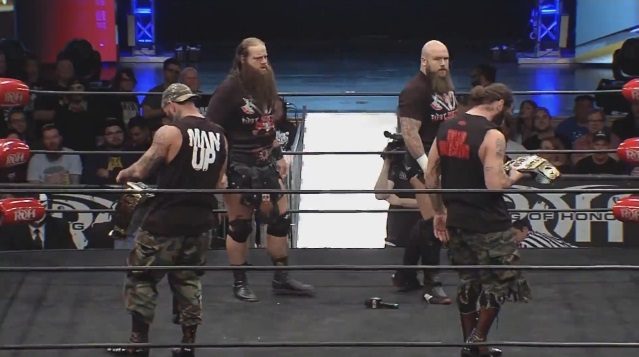 ANX escapes and the Briscoes pick up the tag belts (that for some reason War Machine had to run out with) and we get a brief stare down. The slow build continues to their clash.

A ROH title match on ROH TV is kind of a big deal. Love the small touch of Lethal looking over his shoulder during his introduction to make sure Goto doesn’t sneak attack him. Lethal with control out of the gate as MW3 notes he can’t let Goto ever get in the mindset he has a chance. See, small commentary notes like that really make me like the program. We get a Hendrix ring apron distraction followed by a terrific dive by Lethal through the ropes. Full force there.

Goto shakes off Lethal’s strikes and challenges him to bring it on before nailing him with a lariat. Goto blocks the Lethal Injection with a kick to the back and gets a Saito suplex for two. Head-butt (excellently sold) and neckbreaker to the back of the knee get a good nearfall. Taeler tries to grab Goto’s foot and gets her hand stomped for her troubles. This gives Lethal enough time to throw Goto at Truth Martini, but Goto grabs the Book of Truth. Todd Sinclair (not so cheap plug, he did a podcast with Ben Morse and myself – he is awesome) takes the book away and that’s enough time for a superkick and Lethal Injection from Jay for the win.

Donovan Dijak surprises the celebration and here’s the big angle heard about from the tapings. Dijak and Lethal go at it, with Dijak clotheslining him over the ropes. Truth attacks with the book, which is shrugged off. Truth backs into Prince Nana and turns around, slyly taking off his glasses before turning into a big boot. Now, as it’s well known, Truth can’t take bumps and he does an awesome job here absorbing the kick and spinning back and then falling to the ground. He looks to do a sit-up and kind of freezes after rising a bit and then stays still, fists clenched close to his side. Crowd chants “You just killed him” and we go off the air. 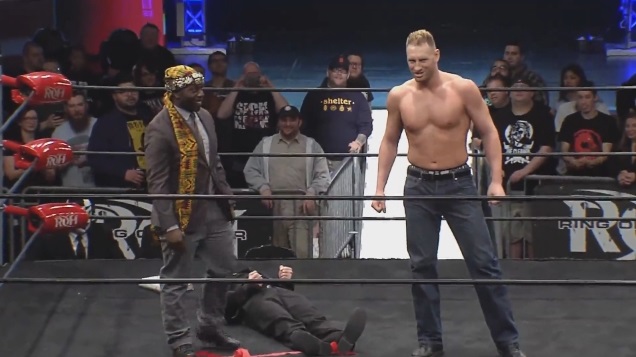 Business picks up post-match and you can watch it below. KK and Todd Sinclair add to the realism here (talking to the crew, which is picked up by the mics), but let’s all be real. If he was legit hurt, they’re not using a table to carry out a guy who can’t feel his limbs and has a potential serious neck injury. They worked the crowd and Twitter fantastically. Taeler was great, genuine emotion and all, but I’m curious what the end game is? A face turn for Truth? What’s the point of doing a fake neck injury angle to a heel unless there’s a big return/redemption story? We’ll see.

Final thoughts: This was a story-driven episode with the three dedicated promo/angle segments. While it was great to see the title defended, it was  inoffensive fairly standard ten minute tilt. Lighter on the action this week overall.