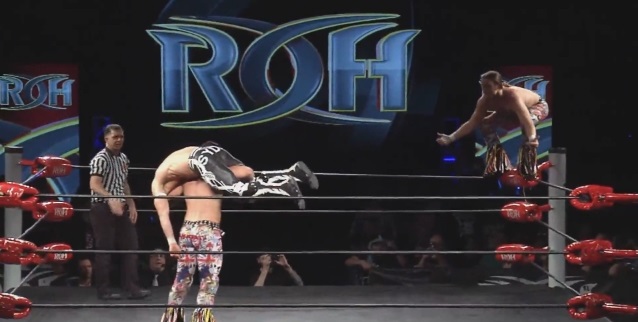 I’m excited to bring back regular recaps of ROH TV and can promise more ROH-centric content on the way here at PTBN (of course be sure to check out the Kevin Kelly Show) using the tag ROH Nation. Now more than ever there is a ton of wrestling to watch and, well, there are limits in our viewing capacity and how many promotions we can follow. ROH is one I’m particularly passionate about and their TV regularly helps me escape back to when I first watched and enjoyed wrestling. These recaps aren’t to provide detailed play-by-play of the action (there will be some), rather to provide running commentary and talk about current ROH story-lines, while ultimately putting over whether the hour block of TV is worth checking out.

If you’re new to following the product, there are a lot of places to catch ROH’s latest TV. Perhaps a local Sinclair station has it (times vary) or maybe you can catch it on Comet (a thing). Of course you can always watch the latest television on ROHWrestling.com.

Final first round match-up. Rush is 5’6″ and even though I haven’t seen him before, there’s a buzz that comes with his name. Kincaid elicits a “Whoa, this guy is cool” in my best Butthead voice (of Beavis & Butthead obviously). See, we’re a pop culture website so I’m doing my part. Kincaid hits a springboard swinging neckbreaker from the apron. Lot of fast reversals but they did a nice job of not looking too choreographed. Rush barely breaks a sweat hitting a big diving somersault to the outside. Kincaid super impresses with a van terminator after Rush rolls off the apron to the outside. He got just enough to make that look great. Follows it up with a blockbuster from diving through the ropes to the outside. Heckuva sequence that wins the crowd over. Rush avoids a stomp from the top rope and hits what Nigel calls a “one man spanish fly” on a charging Kincaid in a high impact  finish. Kincaid’s look and act was pretty fresh and would certainly have no issue slotting in to a regular spot. Wanted to see more from Rush outside the dive and the flash finisher, but there’s always next round. This got BOTH guys over.

Silas Young and The Beer City Bruiser vs. Caprice Coleman and Will Ferrera

Now look, you may make the case that the Bruiser has no business here, but I counter with – does anyone fill their role in ROH better than the Bruiser? He partners with The Last Real Man in Professional Wrestling and brings an empty keg to the ring. I didn’t give Bruiser much of a shot after watching him live in last year’s Top prospect tourney but this is a niche for him at least. Prince Nana on commentary as the story here revolves around him forming another faction. Ferrera and Coleman got invites and are tagging despite just coming off a mini-feud (and a no-dq match on ROH TV). I don’t see the future (?) fit with Dijak though as part of this group. He should be on his own as a change of pace from The House of Truth. Ferrara tries to slam Bruiser but gets splashed. Caprice gets a hot tag so apparently Nana’s guys are the faces despite no reaction so far. Ferrera plays off the failed body slam attempt earlier by powerbombing Bruiser out of the corner before Dalton and the Boys show up as a distraction with Caprice finishing it off from the top. KK ponders out loud what Prince Nana could be building and I haven’t much of a clue either. I like Caprice though.

Big angle time as the Decade is out and we get a rewind from last week when Whitmer creamed Colby Corino post-match (Colby takes a ridiculous last ride bump into the apron in that match). BJ cuts a promo and here comes Steve Corino to announce he’ll eventually fight BJ (Final Battle? Can they draw that out that long?). Corino announces the guy who will take out BJ: Adam Page. Eventually Colby needs to pay this off with a flash pin win over BJ as well. We get a pull-apart brawl as Corino looks on from the ramp.

Replay of the finish to last week’s middling ANX/War Machine match. It’s No DQ at the 14th Anniversary show, which is a good stip here. Big power moves and breaking tables and the like, which differentiates from the Briscoes traditional tag and the fast-paced 6-man.

Wouldn’t even call this a competitive squash as Mark makes short work of Hughes, Fisherman buster – froggy bow, done. Segues into talk about Elgin/Tanahashi vs. the Briscoes at the 14th anniversary show. I’ll give them this, even with just an hour, they’ve managed to spotlight a ton of stuff for the upcoming PPV.

KK asks if there is a hotter act in the business than the Bucks and he’s probably right. Just imagine being 12 years-old and finding ROH and seeing the Young Bucks. You’d want these guys on every show but the taping schedule builds the anticipation out for that one big match every couple of weeks. Great TV main event here, building right into the 6-man at the PPV. This is cut down to under 10 minutes for TV (includes a brief break too), but this is, as expected, all action – little enforcement of rules and a super kick party from the start. We do settle into the traditional part of the match post break with the Bucks continuing to mock ACH’s basketball mannerisms. Crisp standing shooting star and the action culminates with ACH getting double super kicked as he dives through the ropes to the outside (catching his foot in the process too). Ouch. The Bucks work Sydal over but More Bang for Your Buck is blocked (both times) and ACH is recovered to hit a big stomp off the top rope onto the back of Matt Jackson with Sydal hitting the shooting star press for the big win.

Final thoughts: This episode gets a strong recommendation from me. There’s a lot crammed into this hour with both the opener and main event worth seeking out.

For more on ROH TV #229 and #230 be sure to check out the latest This Week in Wrestling with Pete and Johnny reviewing the shows.