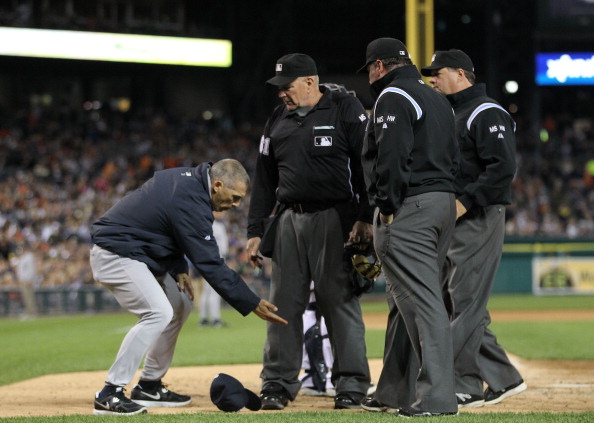 One step forward, fifty steps back. That is MLB’s standard operating procedure. I love that they are finally admitting Instant Replay is needed and will be implemented in 2014. It is just too bad that the system they put in place is brutally stupid and solves zero issues about the clear incompetency of the umpires. You can read the details here, so I won’t break them down, but I will tear them apart.

– Umpires still have zero accountability outside of potentially three blown calls a game. This does nothing to actually improve the quality of the role. Until there is a system that fines or penalizes umps for bad calls (of which there are plenty), then the behavior will continue.

– There is no reason there needs to be a challenge system. Why even force managers to be involved and have to decide which of the shitty calls should be challenged? This also adds the dreaded “extra time” to games that everyone worries about. The managers have to get word, confirm it was bad call and toss the flag all before the next pitch and then the review goes down.

– This new system allows for one challenge through the first six innings and two after that. Why are calls early in innings less important? That makes zero sense. Momentum swings in baseball can occur at any point in the game. We saw that in Saturday’s Yankees/Red Sox game on FOX when a couple of bad calls killed a Yankee rally early in the game. The Sox took advantage and piled on afterwards and the game was a laugher by the end, rendering any need for the challenges useless. Now, not every game is the same but there is no way to guarantee the bigger blown calls will happen towards the end of games. Every call matters.

So, here is my suggestion: Have an umpire in the media booth above the stadium, armed with four or five TV monitors and a DVR, with an assistant (college grads would do this job for pennies). This umpire has the right to immediately overturn any call at any moment based on evidence shown on his monitor. If the call is wrong, he buzzes the crew chief and advises him to overturn the call. This allows for accountability, adds jobs to appease the umpire union and also shaves off the challenge time and process. Managers no longer have to decide which call to challenge, because every single play is given the opportunity to be called as correctly as possible. Is it perfect? No. But I think it is way better than the mess we are going to see in 2014.

In the offseason, I will tackle the balls & strikes issue as well.

Some other musings about America’s Past Time: 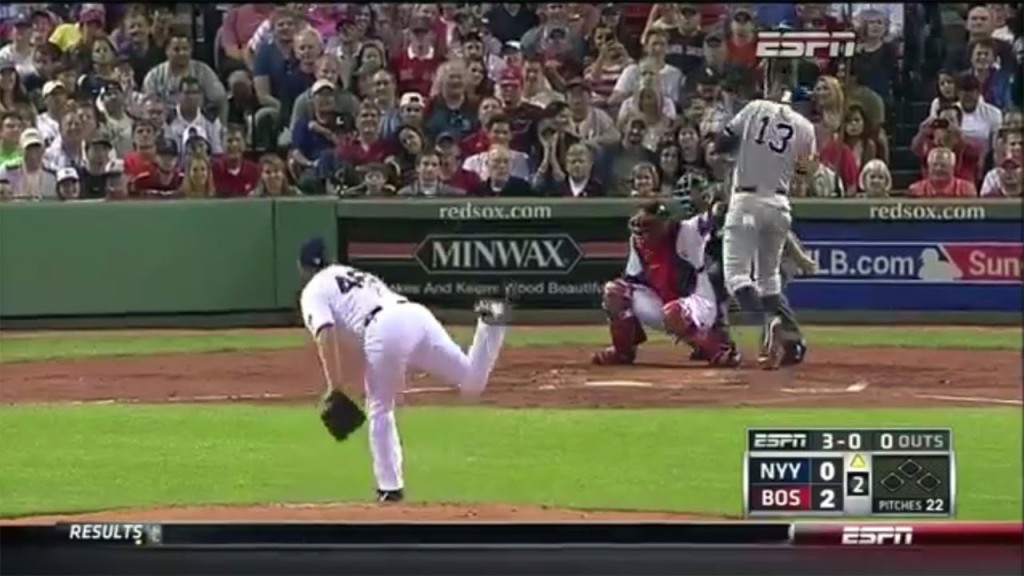 – Ryan Dempster was stupid and put himself and his team into a no-win situation. There was nothing to gain from throwing at Alex Rodriguez, outside of some cheers from angry Red Sox fans. I am not sure what hitting a guy in the arm proves. Does it take away A-Rod’s money? Does it force him to leave the sport in shame? There is literally nothing that the HBP does to hurt A-Rod outside of 30 seconds of pain. The negatives far outweighed the positives and that shone through. He turned a hated A-Rod into a sympathetic figure (even if just for a few hours) and many non-Yankee fans out in the social media and baseball world suddenly found themselves looking at that game differently, with the Sox as the bad guys (Chad Campbell!) that had gone bush league. He also galvanized a fractured Yankee clubhouse, leading to the team rallying around the embattled Rodriguez and forging a comeback win, including an A-Rod dinger off Dempster in a moment that ESPN would have paid millions for (oh, they already did…carry on). The Yankees desperately needed a win to stay alive and that intentional HBP seemed to spark something inside the offense. The Sox are struggling and they now head to the West Coast for a rough week in San Francisco and Los Angeles. I am not saying the Sox would have won that game, because Dempster sucks anyway, but they definitely seemed to be a bit more in control before that nonsense. And how does it take a major league pitcher four attempts at hitting a batter? Dempster really should have let it go after he whiffed the first time, because the point was made. It was the next three that really pissed everyone off. Terrible all around.

– John Lackey should shut his mouth. He is part of the union that voted for an appeals process that lets players continue to play. He has most likely played with (and probably still does) PED users in the past. If he wants every PED fueled hit against him off his record, then he should also look at the PED fueled hits that came from his own teams and allowed him to cash in on a major contract four years ago. Oh, and that ring that he has is from the peak of the steroid era. It’s easy to sit back and toss stones at everyone, but the guys that do are usually the ones forced to back up and retract a couple years later.

– Brian Cashman should shut his mouth too. This whole Alex Rodriguez deal is a mess on many levels, but the Yankees are doing themselves no favors by speaking publicly about everything. Cashman is known to be very loose-lipped around the media, but this is one time when the Yankee brass should button up and stay quiet. Let the process play out and just focus on winning games. Nobody needs to know the gossip of who says “Hi” to whom inside of Bronx High. Instead of taking shots at A-Rod, maybe he should have figured out how to get Alfonso Soriano in pinstripes back in June instead of three weeks ago. 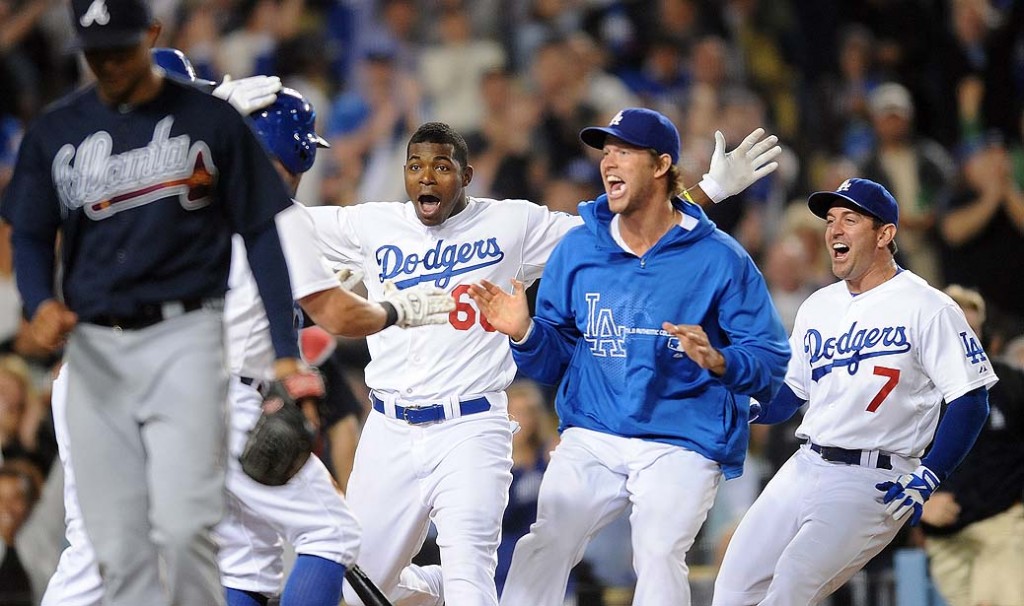 – While there are still some hotly contested races in the AL, the NL has things just about sewn up. The Braves and Dodgers have all but punched their playoff tickets via divisional crowns. The NL Central is still up for grabs, with Pittsburgh, St. Louis and Cincinnati all within three games of each other, but the two teams that miss out are both in great shape for the Wild Card slots. A St. Louis/Cincinnati Wild Card play-in game would be pretty fantastic baseball drama. The Dodgers are on fire and look like the team to beat, but Atlanta’s pitching and depth will make them a force in October as well. However the seeding shakes out, the NL playoffs are going to be tremendous fun this year.

– Over in the AL, only the Central is pretty much decided, as Detroit has finally pulled away from Cleveland thanks to a four game sweep two weeks ago. The West battle between Texas and Oakland that ignited last year continues in 2013, with both teams tied in the loss column. The loser of that race still has a three game lead on the second Wild Card spot, so both teams may be playing in October once again. Same goes for the AL East, where Tampa and Boston continue to ebb and flow atop the division but maintain a healthy WC lead too. The Orioles and Indians continue to hang in, just a few games behind. The Royals have finally started to fade a bit and the Yankees have now passed them. It will be interesting to see if any of those four teams can make a late charge for the slot. 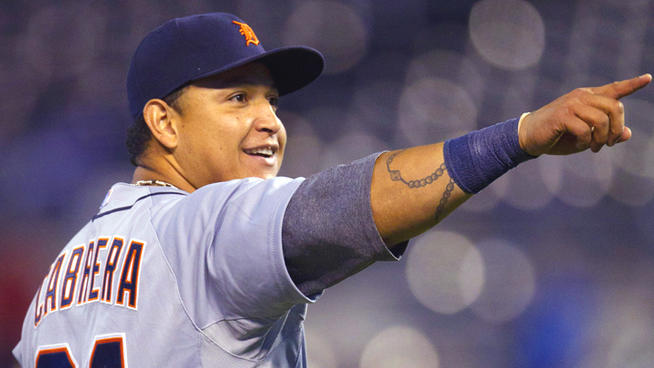 – In addition to a division crown, the Tigers should be racking up even more gold at the end of the season. Despite a fantastic season from Chris Davis, Miguel Cabrera should be taking home his second consecutive AL MVP award. Miggy has a legit chance at the Triple Crown as he posts another amazing offensive season. His teammate Max Scherzer is also the likely Cy Young winner in the AL as his dominant season has seen him surpass Justin Verlander across the board. With those two atop the rotation and Cabrera pacing the offense, Detroit will once again be a tough out in the playoffs.