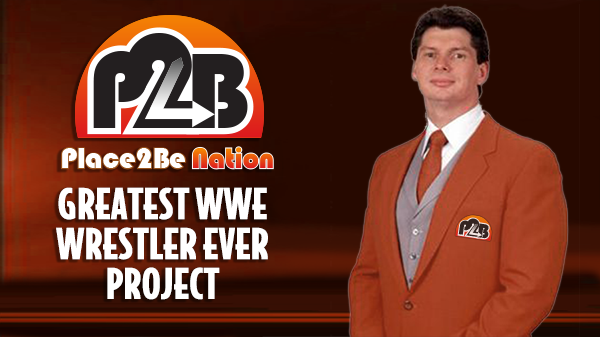 Before participating in the PTBN Greatest WWE Wrestler Ever project, I felt like I was a wrestling fan subset of one. I watched more wrestling and geeked out on it more than anyone I knew in real life, so would hold back in real life conversations. At the same time, I hadn’t seen every WWE match let alone older territories, lucha or Japan, so I didn’t really feel connected to a lot of the online communities and chat rooms, finding some of the discussions and participants intimidating. But the PTBN GWWE was different, the scope of the topic seemed more manageable and the participants more positive, encouraging you to check out wrestlers or matches. This helped me rekindle the fire of my fandom and for that I wanted to thank everyone who worked to make this project a success.

I grew up when wrestling was finding its first mainstream success with the start of Hulkamania and the Rock ‘N’ Wrestling connection (yes, I understand that makes me old). Wrestling was the cool thing back then, and tons of my friends were fans of WWF, so I went along and tried to understand why it was such a big deal. We rented and watched the tapes of the first two WrestleManias from the local video store (another sign I’m old), and they were fine. I liked them well enough, but still didn’t quite buy the hype.

Then WrestleMania III happened. The Hogan/Andre feud was so perfectly built that everybody was into it. But after I watched the WrestleMania III tape, I could only think and talk about Steamboat/Savage. While my classmates were still stuck on Hulk and Andre, I was all about the Dragon and the Macho Man. About the same, during trampoline wrestling with my cousins (they didn’t tell us not to try this at home back then) I hit the bodyslam and dropped the big leg, for less than a one-count. So I realized either my seven-year-old cousin Shane was a bigger badass than Andre the Giant, or just maybe pro wrestling wasn’t on the up-and-up as a competitive sport.

I didn’t care about that, as long as there were performers like Steamboat and Savage that could carry storylines and matches, making me care about them and about wrestling. But I was starting to realize I was watching and enjoying wrestling differently than my classmates who liked the glitz and glamor, but I assume didn’t stick with it to the point that they are voting in a poll like this 30 years later.

My fandom hasn’t been constant since that point, by any means. I quit watching sometime around 1990 (I knew Ultimate Warrior won the title from Hulk Hogan, but didn’t know he flopped as champ and flaked out repeatedly until much later) and got back into it just as I was graduating college, first with the NWO and later with Austin and the Attitude Era. I had plenty of company, as once again wrestling got white-hot and everybody was on board. About this time, I found the Internet and a lot more information on wrestling, the wrestlers and what made wrestling good or bad. I devoured it all and sought out videos of some of the matches and events I’d missed. Even though wrestling was still popular through the Attitude Era, I didn’t know anyone else actively watching older videos, so again noticed I was watching wrestling differently than my friends who were fans.

And I think that’s part of why I loved this project so much. Like I mentioned before, my friends didn’t share my level of enthusiasm for the graps and online communities and message boards had never been my thing before. But I really feel like the group involved in this project and the discussion on the Facebook page was the perfect outlet for the type of wrestling talk I’d been looking for during my journey as a fan. There were many suggestions to learn more about different eras and performers, but the talk was mostly positive. I like looking at wrestling with a critical eye, but also want to avoid being so critical that nothing is enjoyable or fun, and I think this group struck a good balance between critical analyses, while still enjoying the product.

I’m not one of the original PTBN inner circle; I’ve never met JT, Scott or anyone else from PTBN. I feel like I know them, since I’ve listened to them talk about wrestling for countless hours, but I’ve never had any actual interactions with them, other than through the Facebook page for this project. But I want to thank them and anyone else who did a podcast, wrote a piece to promote a wrestler or even offered match suggestions or opinions on the Facebook page.

I freely admit I had huge blind spots I tried to cover when making my list, but I haven’t seen every match from every PPV that WWF/WWE ever put on. On some sites other participants might go on the attack cutting promos about how you shouldn’t vote if you hadn’t seen this era or that match. I saw very little of that type of behavior on this project, but instead saw tons of recommendations to check out particular matches and give specific wrestlers another look. In many cases this led me to develop a deeper appreciation for guys I never thought I’d like, for example Backlund, Patterson, Valentine, Mark Henry, Big Show and Sheamus. In other cases, I scratched my head wondering what everyone else saw that I didn’t.

But that’s cool; the variety of opinions is what makes this project fun. While I’m pretty happy with my list and feel like it accurately reflects my opinions and what I value in wrestling, I don’t consider it a definitive finished product. I believe it was noted philosophers Aerosmith that said “Life’s a journey, not a destination, and you just don’t know what tomorrow will bring,” and I feel like this project is a little like that. I’ve got my list and opinions, but if someone scores significantly higher than I expected I’ll look forward to seeking out more of their stuff, just in case I missed something and can find another wrestler that I unexpectedly enjoy.

While I did take this project seriously, because that’s what allowed me to find new wrestling I enjoyed, but I understand this project wasn’t particularly important in the grand scheme of life. There are far more important things than our shared love of wrestling, but that doesn’t mean it wasn’t meaningful. This project was meaningful to me because of the new appreciation I found for wrestlers, matches and eras and the discussions we had around the project. I hope others found this project and discussion meaningful as well.

I just wanted to thank everyone involved, everyone who shared an opinion, gave a match recommendation or created an article or podcast and to give a shout out to PTBN for hosting this fine event that I’ve enjoyed tremendously.