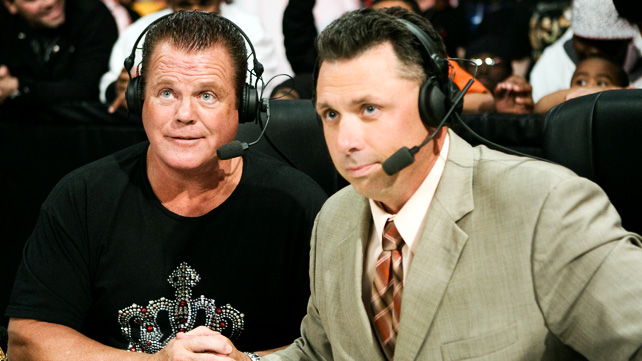 While they were paired together in three man teams multiple times, Michael Cole and Jerry Lawler called just one WrestleMania together as a two man unit: WrestleMania XXVIII. It was a huge event and while Cole was still working slightly as an antagonistic lead man, they did a fine job steering viewers through the storylines and matches. 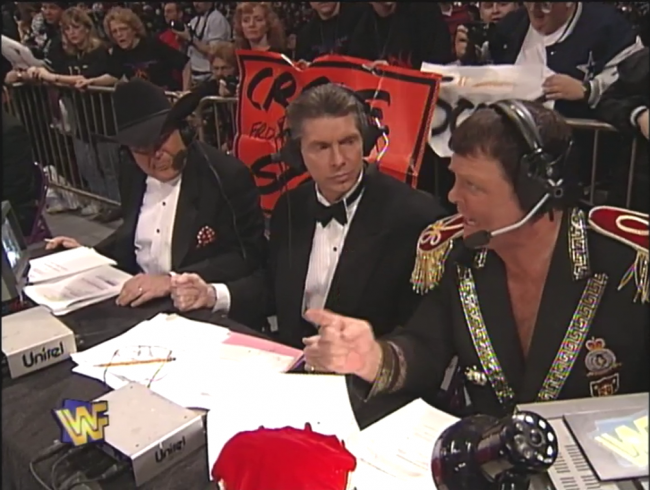 WrestleMania 13 was a changing of the guard in many ways, including in the announce booth. It would be the final Mania called by Vince McMahon and start the long stretch of shows that would involve Jim Ross as the lead man. These three were the key team throughout 1997 and do a great job throughout this event, specifically in calling Bret Hart vs. Steve Austin. The match was one of the greatest WrestleMania bouts of all time and their work in the booth was a big part of the story. 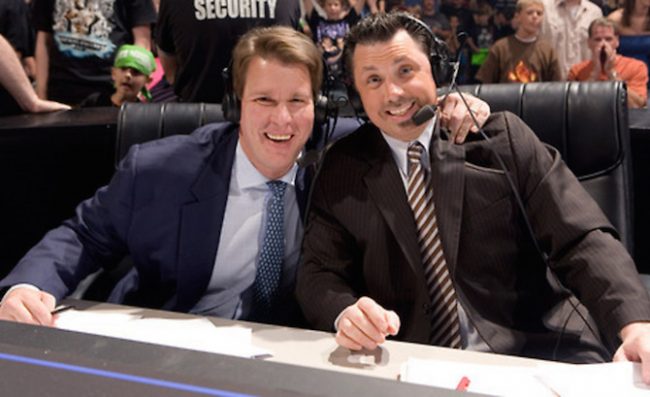 When ECW was created as a brand in mid 2006, the lauded announce team of Michael Cole and Tazz were broken up and it was revealed that JBL would be transitioning from the ring to the booth to join Cole. There was instant chemistry and comparisons to the beloved Jesse Ventura soon flowed. WrestleMania 23 would be their only PPV together as a two man booth and they were just as great there as they were each week on Smackdown, especially during Undertaker’s war with Batista.

Our next entry was another one team commentary team but it is one of the most memorable in WrestleMania history. Making his official WWF debut, Jim Ross was shown great trust as he was tapped to call the biggest of the year. Alongside him was lead heel color commentator Bobby Heenan and the legendary Randy Savage, who had settled into the broadcast booth as a key piece of Monday Night Raw. In addition to the instant chemistry and memorable one liners, the three men were decked out in togas to celebrate the Caesar’s Palace atmosphere. 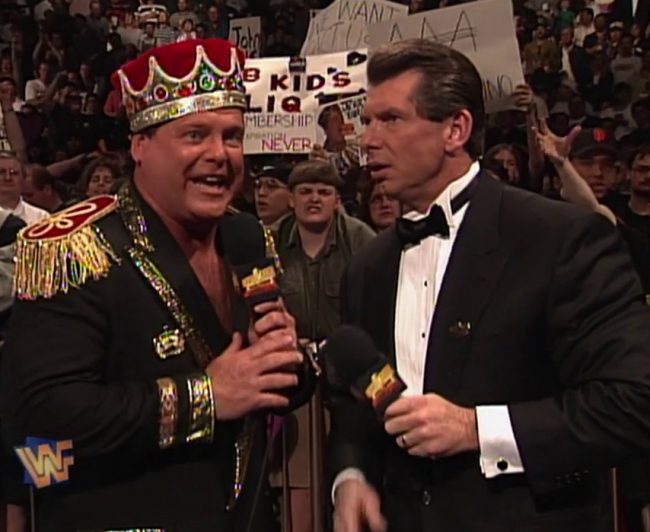 The official commentary team of the New Generation, Vince McMahon and Jerry Lawler called three straight WrestleManias as a two man duo. They were well versed in the era, announcing Monday Night Raw each week, and were very in tune with all of the character tics and storylines. They also built up an easy chemistry that saw a mix of bombastic calls and one liners that characterized the era. Their defining moment as a unit was their call of WrestleMania XII’s Iron Man match that brought about a nice mix of psychology and bombast that was needed for a bout and moment like that. 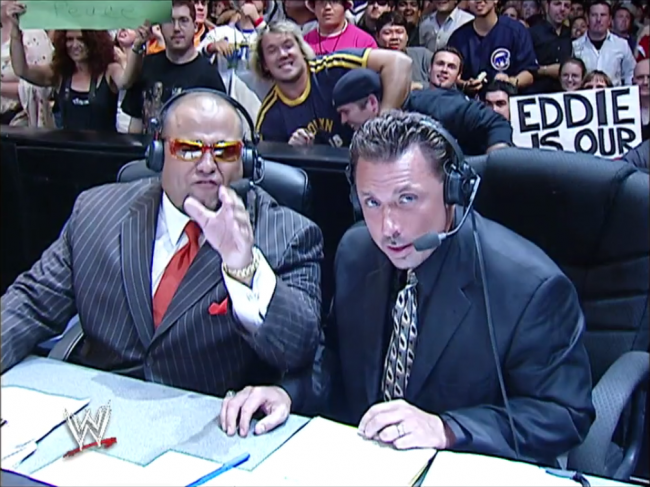 One of the biggest benefits of 2002’s brand split was the sudden emergence of Michael Cole and Tazz an announce team. For years, Cole was the butt of jokes by many fans and pundits but Tazz was the elixir he needed to steady the ship. He learned how to become a pure sports play-by-play man and leaned on Tazz to utilize his experience to break down match psychology. They also built up tremendous chemistry and effortlessly blended in jokes and showmanship to their commentary as well. They were able to announce parts of four WrestleMania together, with their signature moment coming in 2003, when they were given the chance to call the main event WWE Title match.

Our final entry to have only called just one WrestleMania together, Jim Ross and Paul Heyman teaming up to announce WrestleMania X7 was the result of a perfect storm of events. The spring of 2001 was a tumultuous time in wrestling, as WWF had just purchased WCW and ECW on the eve of the biggest WrestleMania in history. The WWF was a ratings and money making machine and had multiple big time storylines cresting in Houston. Added to all of this is that entrenched color commentator Jerry Lawler had just quit the promotion in protest and all of a sudden there was a gaping hole at the announce table for the biggest show of the year. Enter Paul Heyman. Even though their announcing came off as adversarial, Ross and Heyman had plenty of experience working together from their WCW days and were excellent at trading needling barbs while also effortlessly calling the action and furthering the huge storylines as they unfolded. It was a brilliant night of commentary befitting a brilliant night of WWF wrestling. 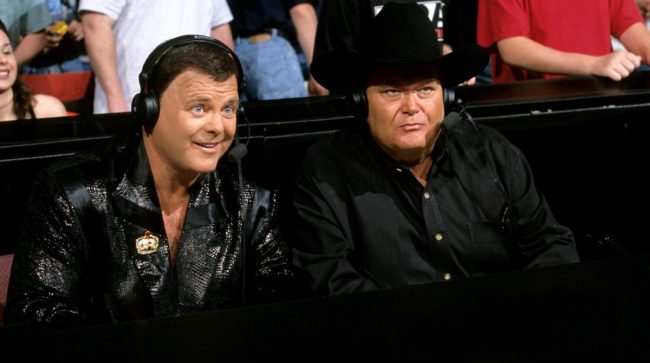 As we reach the top three, we approach the most revered of the WrestleMania announce teams. Jim Ross and Jerry Lawler hold the record for most WrestleManias announced together as an exclusive duo at nine and were the official voices of the Attitude Era. With smooth chemistry and decades of experience, they were the men that called all of the biggest matches and moments for nearly a decade. And they set that tone almost immediately with a great call of Steve Austin’s ascension to the top of the WWF mountain in 1998, establishing the template they would use for moments like that in years to come.

One of the most beloved announce pairings in WWF history was the legendary duo of Gorilla Monsoon and Bobby Heenan. With tons of history behind them thanks to their time together on WWF Challenge and Prime Time Wrestling, it made perfect sense to transition Heenan into the lead heel color man when Jesse Ventura left the promotion in 1990. Amazingly enough, these two only called two WrestleManias together, but the commentary was so legendary and memorable, it was enough to net them the #2 spot. In fact, their announcing for the Piper/Hart and Savage/Flair bouts at WrestleMania VIII alone were more than enough. Iconic in every way. Will you stop! 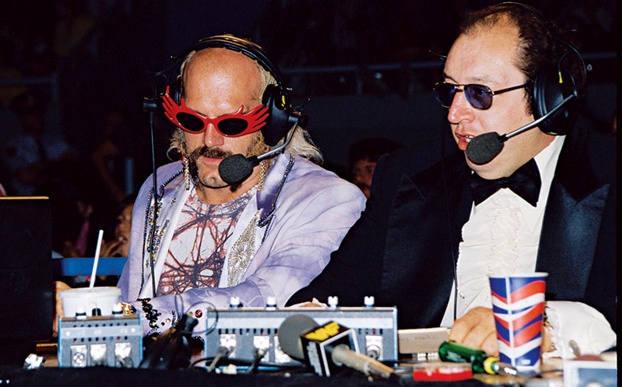 What is there really to say? The original voices of WrestleMania. The soundtrack of a generation. Huge moments, big time matches, the birth of an iconic show: Gorilla Monsoon and Jesse Ventura presided over all of that from 1985 through 1990. They are easily a huge part of what made the events so successful in the early years and as you can see by the point totals, were an easy choice as the Greatest WrestleMania announce team of all time.