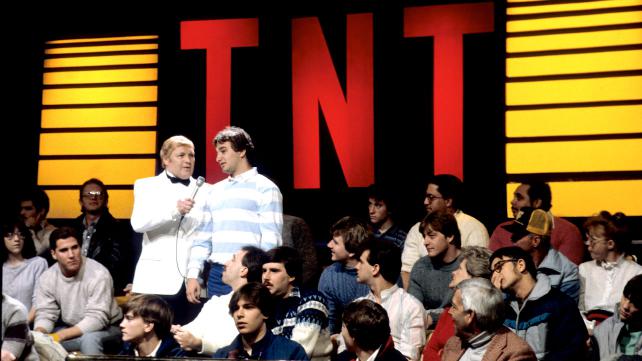 JT: The ring announcements for the midget match just for the announcer’s accent and the absurd names. Little Joey, Little Brutus… fantastic. “HIS PAHTNUH!”

Brian: The second Hulk Hogan & Hillbilly Jim trading montage was the best thing tonight. They were goofy yet entertaining.

Dan: How do you choose just one out of this lot? I kid of course but let’s give the devil his due and reward the usual punching bag Lou Albano for his passionate promo and his complete 180 as a character. I know he’s kinda played out since he’s on every show but you can feel his hatred of Rowdy Piper through your television. He also remains humble in his new role frequently apologizing for his behavior to Vince and Alfred. Plus he busted out the line “lower than a gardner snake’s belly” when referring to his adversary. More good guy Lou. It definitely beats the alternative!

Scott: There’s not much to find here that’s worth a “great” tag. We get nothing but vignettes and more clips from that stupid wedding. I guess I’ll say the best segment was the Hogan/Hillbilly workouts because that’s actually a story progressing with each episode. Otherwise the rest of this episode is rehashed crap.

JT: Sky Low Low for his great bump when Freddie Blassie clubbed him with his cane. It made me laugh a second time, so why not. Also, his weird mumbling to kill time while thinking of answers during his interview was absurdly funny too. Honorable mention for Paul Vachon laughing after Dr. D slammed a plate of cake in his new bride’s face. Everything else was boring as shit.

Brian: I’ll go with Hillbilly Jim for pulling off his role well as the guy who has never wrestled before.

Dan: Hulk and Hillbilly continue to amuse me weekly. Jim still looks an awful lot like I would at the gym. Unsure how to use the equipment but maybe a tad stubborn to actually ask anyone for help. I bet Greenhouse could help me work out if we lived anywhere near each other. Hulk has his hands full trying to get the big guy ready for the ring but I’m definitely enjoying watching Hillbilly’s progression.

Scott: Hillbilly Jim, for the same reasons as above. His segment wasn’t some rehashed junk from the previous few episodes.

JT: That they thought this episode was worth airing.

Brian: I was surprised they brought Sky Low Low out to talk about the Buther Vachon wedding and how he is doing in married life.

Dan: I’m surprised how insightful Alfred can be when he’s not trying to be goofy. His analysis of what makes mask wrestlers so difficult to fight was spot on. He actually made a segment featuring the Executioner seem somewhat interesting.

Scott: I’m surprised that as the calendar turned to 1985 we didn’t get some fresher material and had to rely on more clips from that dumb wedding that nobody cares about anymore. It’s time to bring some fresh stuff to the forefront, and perhaps get the champions of the promotion on more.

JT: That I had to sit through clips of the garbage Vachon wedding. Poor Diamond Lil.

Brian: That there was barely any original content on this show. Plus, segments for the Executioner (Danny Davis) and Sky Low Low? Why even bother?

Dan: I’m flummoxed that we had to relive that God forsaken wedding all over again. It’s not like we were begging for it the first time it aired. Now we get highlights and clips featuring the commentary of Sky Low Low. It’s like Vince ran out of stuff to do on this show but didn’t have the heart to just cancel it for the sake of mankind.

Scott: To reverse above’s surprise, I’m disappointed that three weeks into the new year and we have to continue airing crap from 1984, and not even wrestling or storyline stuff, but that dopey wedding and other comedy bits that have already not aged well after a month.

JT: We kick off with the Hulkster back in the pill factory with Hillbilly Jim, getting him juiced up for his big debut; They really are trying to establish Jim as a big star out of the gate by pairing him with Hogan; “The greatest midget wrestler of all time”; Sky Low Low looking haggard AF; Low Low giving the Lowlowdown on the struggles of the newlyweds was quite random; “Little Joey”; The accent on the announcer for the midget match was fantastic, “his pahtnuh”; early inklings of a big Tito Sanatana/Executioner feud here; Funny how all of a sudden they have the crowd chanting for Lou Albano as he enters; They really must have just wanted to punt this episode as it is loaded with recaps of the past couple weeks, or maybe they assumed nobody watched around the holidays and wanted to get these segments back out in front of more eyes; The end with the haircut tease was very bizarre

Brian: The show started off with the Hogan/Hillbilly training montage and it all went downhill from there. Hilbilly Jim was red hot as a character at this time too. We then got a Sky Low Low segment and he was difficult to understand at times. He also broke the news that Butcher Vachon and his wife are already having marital problems. We then saw clips of a midget match that seemed like it was from the 1970s. After that, the Executioner came out as this time it was Danny Davis, who oddly enough was primarily the masked “Mr. X” character. They showed him against Tito Santana in a match from “Championship Wrestling” and Santana would wrestle the Executioner at WrestleMania, but it was Buddy Rose under the mask for that match. According to Davis, Chief Jay Strongbow put him in the mask one night to do a job and after that, saw something in him and he continued doing that. Davis also said he never had any formal training and basically learned on the fly. We then ended with clips of Piper attacking Albano on TNT from a few weeks ago with Albano now on the show vowing to get revenge on Piper for all the bad he has done and name drops Hogan as someone who will stand up to Piper. This show ended with Hayes in a barber’s chair to hype Bobby Heenan, Big John Studd, and King Kong Bundy for next week for some grooming tips.

Dan: Vince begins by saying the band is back and he promises surprises tonight though we saw as many shots of the house band as the number of podcasts I’m currently working on (That would be zero if you’re scoring at home.). What is Hogan’s problem with Hillbilly’s hat? I have a pink tank top just like Hulk FYI. I definitely laughed when Hogan used the “just because you beat a bear at the circus” comment. Sky Low Low was called the greatest midget wrestler of all time by Vince. Is that as prestigious as the “tallest midget” award? That title should go to Frenchy Lamont if you ask me. Low Low took an awesome bump on the Freddie Blassie cane shot. Sky was on his game with his commentary. He broke down why it’s easier for him to take a pie to the head on account of his lack of hair. He also wore some very fuzzy boots. Is that how Flo Rida came up with the “Shawty had them apple bottom jeans, boots with the fur,” lyric by watching TNT? Hmm Tito Santana and the Executioner. If only they had some sort of supercard on a huge stage where they could settle their obvious dispute.

Scott: Seeing Hillbilly Jim popping pills handed to him by Hogan makes me chuckle; Maybe Hogan teaching him technique is funnier, even with the great Hillbilly music in the background. Right up JT’s alley; Sky Low Low, the king of midget wrestlers… UGH; So this is almost a glorified clip show, with highlights from that stupid wedding again; Watching midget wrestling turns my stomach anyway, but if I had to watch a two out of three falls midget tag team match with a 45 minute time limit, I may put a bullet in my head; Wow the referee in this midget tag match is horrendous, walking over slowly and waiting about a minute before counting falls; Well it didn’t go 45 minutes, but 19 minutes is more than enough for me; Albano AGAIN???? This is the fourth straight episode he is on. Heel or face this is ultimate overkill; There really is nothing great about this episode, it seems like a lot of garbage and clips

JT: This was a rough watch. It was essentially a recap show but it recapped some real stupid stuff, outside of Roddy Piper’s interview. There just wasn’t really anything here worth recommending on any level outside of a few chuckles from Sky Low Low. Easily one of the worst things we have watched to date, yet again. Final Grade: .5/10

Brian: Well, they did showcase the two hottest storylines in the company (Hillbilly Jim/Hogan, Capt. Lou/Piper) but everything else was a giant waste of time. And, if you kept up to date with the current TV product, there was very little new content here to keep your interest. Because they aired stuff to hype up the top feuds, I cannot say it was the worst show in TNT history. It was at least shorter than the two-hour show duds from 1984. Final Grade: 2/10

Dan: The best thing I can say about this episode was that it’s short. Of the 45 minutes, minus two or so for intros and credits followed by the highlights and clips that took up a chunk of time, you really only have maybe 20 minutes of new material. Hulk and Hillbilly were fun but then the show falls into a black hole with all the Executioner nonsense. Probably what kept me from quitting or ending my life came at the very end when it was revealed that Bobby Heenan is returning to do a hair cutting demonstration. So this isn’t completely soul-crushing but definitely not the highlight of my week either. Final Grade: 2/10

Scott: One of the most disappointing episodes of TNT we have had in a while. More old, stale clips and a tag midget match??? Good grief, and when the referee in the clip said it was a 45 minute match, I almost died. Prime Time Wrestling had debuted a couple weeks earlier and clearly that became the fresher show. TNT did do one smart thing though, they finally cut the show down to an hour since two other wrestling shows debuted on the USA Network at that time (All-American also started up, Sundays at Noon). Otherwise, let’s skip this mess and never discuss it again. Final Grade: 1/10

You can find every grade and category winner from the entire Excellent WWE Network Adventure by clicking this link!