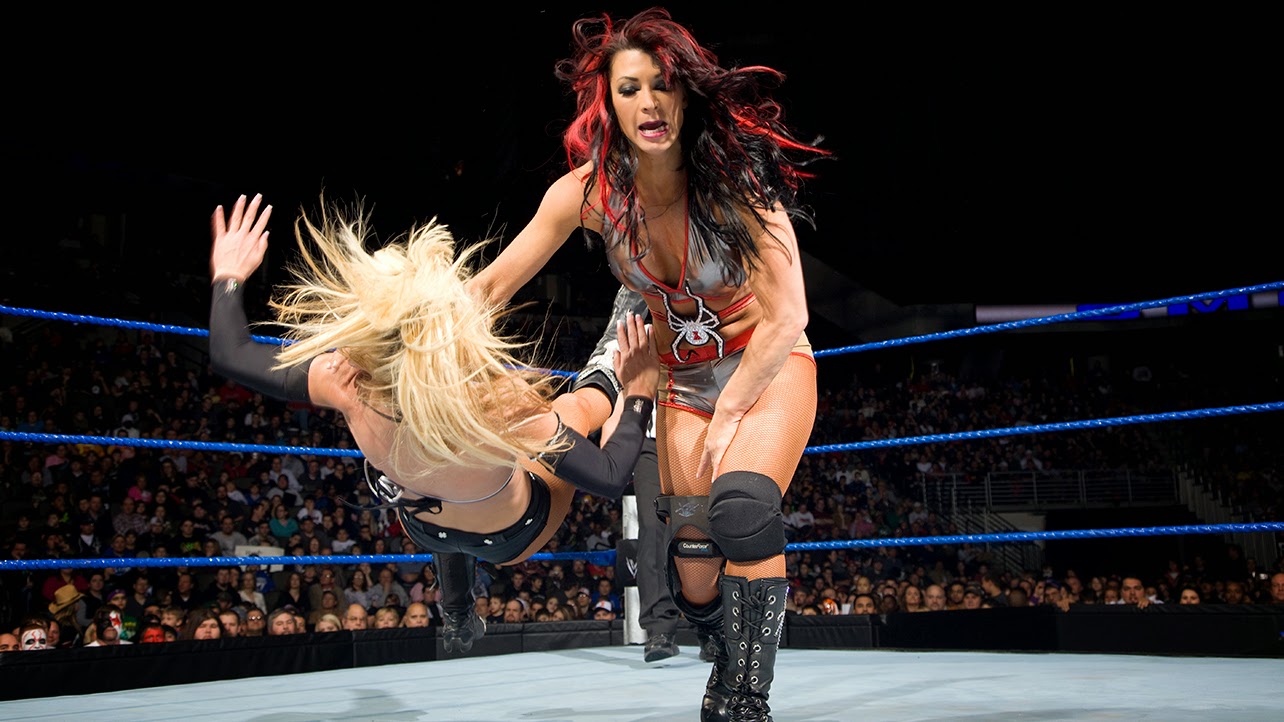 Join me, Stace your resident Divas nut, as I make cases for the female Greatest Wrestler Ever candidates. I’ll be going into all the reasons why I love them and will probably be voting for them, and recommending some matches to explore for yourself. Hashtag Give Divas a Chance!

Victoria is someone I had hoped to talk about on the For Your Consideration women’s episode with Will and Glenn (yeah, cheap plug right outta the gate!). Ultimately we couldn’t squeeze her on ahead of what were deemed more important people, and a more apropos metaphor there never was. Whether it was being painfully underutilized at times during her career, or the lack of interest she’s getting as a candidate now, Victoria always seems to be overlooked. No longer, I say!

Victoria had a fairly long career (for women) and built up quite the body of work along the way. If anything it felt like she spent longer in the company than just over six years. I think that’s because she spanned so many eras, coming in during the Golden Age in 2002, outlasting Trish and Lita and co., surviving the Diva Search era and even living to see the creation of the butterfly belt before she left.

She also played a wide variety of roles during her career, from the psycho heel coming in with a strong push, to her smiling dancing babyface run, and then back to heel, where she stayed for the rest of her career to varying degrees of success. There’s a lot to love in each of these phases: good matches, standout performances and strong character work.

Her initial run is probably what she’s most remembered for, being the crazy heel with that TaTu song and Stevie Richards in tow. She burst onto the scene in late 2002 and was immediately paired with Trish in what might have been the most overtly violent feud in WWE women’s history. They beat the absolute shit out of each other, most memorably in a hardcore match at Survivor Series and the Chicago Street Fight on Raw. They brawled all over the place every week and Victoria even delivered the first ever woman-on-woman chairshot in company history to Trish. Even their “straight” matches were brutal. These two got the chance to have, not a “catfight” with manure and spanking, but legit weapons matches just the same as the men were having, and they knocked it out of the park.

Trish remained her best opponent, and Victoria was one of hers too. Trish had more great matches with her than anyone else, and honestly, of all the top women’s matches from say 2002 to 2005, I’d say more than half of them were Victoria vs Trish. Victoria actually matched up pretty well with most girls. She was skilled and savvy enough to give the inexperienced women a base and make them look good, and then if she was in there with a worker they could tear it up, having good matches with women like Lita, Jazz, Molly, Gail Kim, Mickie and Michelle.

It’s a shame that her most high profile babyface match – the hair match vs Molly Holly at WMXX – was such a disappointment, because their other matches were quite good, and her babyface run in general is underrated. She held the division together in the ring in 2004, working super consistently and having a bunch of good matches with everyone. Her selling as a babyface was pretty great, for example when getting her arm worked over in the much better rematch with Molly at Vengeance.

Nevertheless, this woman was a born heel. The second half of her career she was back to goin’ ‘head with her bad self (I’m sorry, I irrationally love her entrance music). She really anchored things on the heel side for years, able to slot in to the title picture and then turn around and put anyone over when required. She never won the title again, but her anchor role was a vital one, especially in the wake of WWE losing every other wrestler from the Trish era. As time went on she was pushed even less and put over more girls (she didn’t win a single match in the last 9 months of her career, I remember keeping score) but honestly her last few years in WWE are my favourite of hers.

When she went to Smackdown in 2007 and went full stooge, I fell in love. She threw caution and dignity to the wind and completely embraced her role as a goofy jobber. She made an artform out of beating up some random girl and acting all cocky, only to get rolled up and pinned to her complete surprise. NOBODY got rolled up quite like Victoria. One such match is the one vs Cherry (you remember, the one in the roller skates with Deuce and Domino) which is legitimately my favourite squash match ever (is it still a squash when the squasher loses?) and frankly one of my favourite matches ever. Like, it’s in the Top 25, no shit. I have watched that match a thousand times.

Victoria just had total commitment. When there was a Halloween/Seasonal Divas Costume Thing on a show, all the other girls would come out as a sexy this or a cute that or a practically-naked whatever. Victoria, on the other hand, would dress up like this:

She worked the WHOLE FUCKING MATCH in that sumo suit by the way, AND took an insane bump over the top rope to be eliminated. What a worker. When there was a Divas Water Fight Thing on SD, all the other women came dressed in their sexy bikinis and cute cozzies. Victoria, on the other hand, came out like this:

And once again she stooged her ass off the whole match, slipping and sliding around like a buffoon. I swear Victoria was a better working heel in a sumo suit or a damn water fight than a lot of heels are in actual wrestling matches.

*sigh* I’m falling in love all over again just writing about it. So many memories are coming back to me now. Like when she was all mean and snarky during the Vince’s Devils run and wore a t-shirt that said “LET’S GET THIS OVER WITH” to a Bra and Panties match. Girl did not have time for that nonsense. Or when the Bellas first debuted and there being two of them was a “secret” and Victoria was the stooge who was constantly foiled as she tried to reveal it, the Wil E. Coyote to their Roadrunner. Or her great monster heel push at the end of 2006 where she had a checklist and ticked off all the women as she beat them on her way to Mickie, including trying to beat up Lilian. Or when she asked Michelle “got tickets to the gun show?” during an arm wrestling contest. Frankly I could go on with all the goofy heel things she did in 2008, but I digress.

In the ring Victoria had so many tools. She had size and strength and could convincingly work dominant, equal or underneath depending on opponent. She could stooge or be serious, and work face or heel. She sold well and could build compelling, layered matches, or just job like a goof. She had a great offensive arsenal full of cool moves – a nice superkick, the spinny sidewalk slam, the flipping leg drop over the ropes, her gyrating moonsault, too many moves to name, as well as that signature backwards bump out of the ring which always looked super nasty. And above all, she had the Widow’s Peak. The first time she hit it the crowd didn’t so much pop as GASP, like they thought she may have actually killed Stacy with it. What a fantastic finisher.

Victoria has a body of work that stacks up against almost any female wrestler’s in WWE. She worked all sorts of roles, did great character work, was a super consistent in-ring worker, and had some of the best matches of multiple eras of the women’s division. And she was such an awesome jobber that I wanted to marry her. There are many sides to her case, my point is she deserves a fair shake, as do many of the women I hope to highlight on PTBN in the coming weeks.

If you only watch one match, make it…
Trish Stratus vs Victoria – Hardcore Rules (Survivor Series 2002)

Working as a babyface…
Victoria vs Molly Holly (Vengeance 2004)