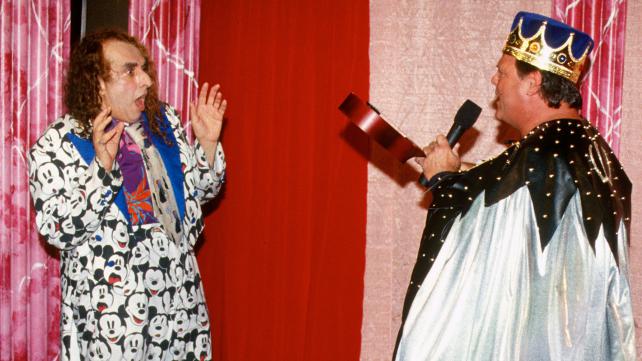 In this edition of Calendar Correlation, we travel back almost exactly 22 years to the Manhattan Center in New York City for the July 19, 1993 episode of Monday Night Raw.

The broadcast opens with highlights of Lex Luger’s “Call to Action” campaign, which had kicked off the previous Thursday. The newly minted American patriot addresses the crowd that had gathered to support him in acquiring a WWF Championship match against Yokozuna, stating that the United States “truly is the land of opportunity.” From there, we get a long shot of the Lex Express tour bus.

Vince McMahon, Bobby Heenan and Randy Savage welcome us to the show. McMahon announces that Shawn Michaels will defend the Intercontinental Title against former Champion Marty Jannetty tonight. Additionally, Men on a Mission will be in action and musician Tiny Tim appears as a guest on “The King’s Court” with Jerry Lawler.

This bout was voted 1993’s Match of the Year by readers of Pro Wrestling Illustrated and continued the saga between the ex-Rockers teammates that had been reinvigorated in late-1992 when Jannetty returned to the WWF. Following a disappointing IC Title contest at January’s Royal Rumble pay-per-view, Jannetty – who had been released earlier in the year – once again emerged out of nowhere to confront his former tag team partner and defeat Michaels for the strap on a May episode of Raw. Jannetty’s reign would be short-lived, however, as “The Heartbreak Kid” would regain the IC Championship a few weeks later at an Albany house show with assistance from the debuting Diesel. This match was enjoyable – Michaels and Jannetty generally had good chemistry in the ring – but hardly the two’s finest hour together, and I would actually place the May title change above this encounter. Jannetty initially gets the pinfall following a DDT after five minutes of action, but the bout is restarted when Diesel and Bobby Heenan notify referee Earl Hebner that Michaels’ foot was on the bottom rope during the three-count. Jannetty later misses a flying bodypress, which sends him to the arena floor, and Diesel throws Marty back inside, allowing Shawn to drape his arm over the challenger and retain the belt. A weak, awkward finish, and hardly what I would consider a Match of the Year-caliber contest, especially with so many other great bouts in 1993 (Vader’s WCW run this year alone provides no shortage to choose from).

Vince McMahon interviews Money, Inc. in the ring. Irwin R. Shyster announces that he and Ted DiBiase will receive a WWF Tag Team Championship rematch against the Steiner Brothers next week on Raw and vows that Money, Inc. will reclaim the titles. DiBiase then begins disparaging Razor Ramon for his inability to defeat the 1-2-3 Kid, which brings out “The Bad Guy.” Ramon declines Money, Inc.’s offer to work as the team’s servant and proceeds to run Shyster and DiBiase from the ring. Following Razor’s departure, The Million Dollar Man gets on the microphone and challenges the Kid to a match, declaring that he will put away the youngster in approximately thirty seconds. This segment would cement Ramon’s babyface turn and lead to a match with DiBiase at SummerSlam.

Match #2: Men on a Mission vs. Rich Myers and Hank Harris

Mo and Mabel are serenaded to the ring by their rapping manager, Oscar. MOM make short work of their competition when Mabel pins Harris in a tag team squash.

“Mean” Gene Okerlund hosts the “SummerSlam Report.” Okerlund announces Bret Hart vs. Jerry Lawler for the PPV in addition to The Undertaker taking on Giant Gonzalez in a Rest in Peace Match. Gene also states that WWF President Jack Tunney will render his decision regarding Lex Luger’s plea for a World Title opportunity this weekend on WWF Superstars.

A highlight package plays dedicated to Lex Luger’s “Call to Action” campaign. Vince McMahon announces that Luger will be appearing the following day on Live! With Regis and Kathie Lee.

Tiny Tim is shown backstage singing and strumming a ukulele prior his appearance on “The King’s Court” later in the program.

Booger performed in Stampede Wrestling under the name Makhan Singh before moving to WCW as Norman the Lunatic. Following a short-lived stint as Friar Ferguson, the WWF transitioned him into this gimmick of … uh … a fat, disgusting slob. Booger quickly dispatches of Despres, pinning him with a double-kneedrop onto the shoulders.

Jerry Lawler welcomes Tiny Tim to “The King’s Court.” Lawler ridicules Tim by mocking his outfit (a Mickey Mouse-adorned suit ensemble) and later destroys the musician’s cherished ukulele after Tim refers to him as the “Dairy Queen.” I did not have high hopes for this segment going in, but it was kept short and Lawler has always been a fantastic promo, so this was an entertaining few minutes overall.

Kid defeats Duffy with a top-rope legdrop in the foreground of Razor Ramon and Money, Inc., all of whom had appeared near ringside during the bout. Post-match, the young underdog exits through the crowd, opting not to approach Ramon nor DiBiase and Shyster.

Following a commercial break, McMahon closes the show along with Heenan and Savage (holding a young fan dressed as “The Macho Man”) by announcing that Stu and Helen Hart will be live in attendance for their son Bret’s match against Bam Bam Bigelow next week.

This was perhaps a notch or two above a typical 1993 edition of Raw, with the Michaels/Jannetty I-C Title clash and Razor Ramon babyface turn being the standout moments of the night. Everything else – a handful of squash matches and “King’s Court” talk segment – was essentially standard fare for the time.

Thanks for reading, everyone. Feel free to send me an E-mail at AdamW@placetobenation.com or find me on Twitter at @AdamWilcox_1980.

In addition, be sure to check out the most recent installment of PTBN’s Monday Night Raw Live Watch podcast series!