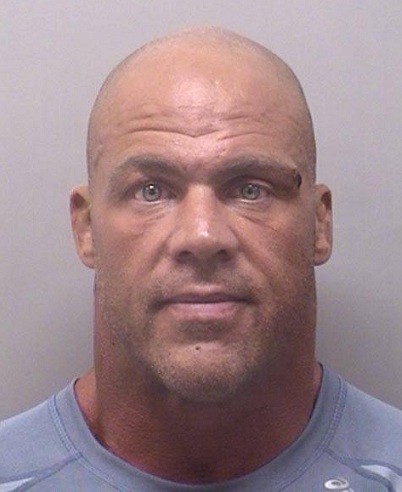 From the moment he debuted on WWF television at Survivor Series 1999, Kurt Angle instantly became one of my favorite wrestlers. By the end of 2000, Angle had collected the European Title, Intercontinental Title, King of the Ring crown and WWF Title.  Most importantly, he solidified his place in my all-time favorite wrestler Hall of Fame. Over the next few years, Angle continued to dominate things, delivering five-star classics, including his war with Steve Austin at SummerSlam 2001, his tag team clinic at No Mercy 2002 when he teamed with Chris Benoit against Edge and Rey Mysterio and his tremendous WrestleMania main event with Brock Lesnar. In late 2002, rumblings began that Angle was suffering from some serious neck pains. By the following April, Angle was going under the knife for experimental surgery that had a projected recovery time of three months as opposed to standard year-long rehab needed for the more traditional procedure. Angle returned in June and was right back to wrestling at an incredible pace, tossing his body around without a care in the world. The fans benefited but Angle’s body paid the price. 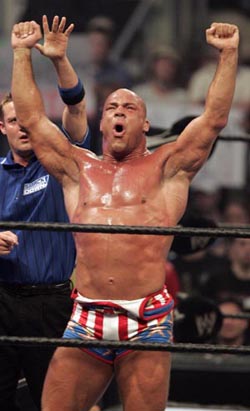 In April 2004, the neck pains returned and Angle was sent back to the sidelines, this time to stay on screen as Smackdown General Manager. He would return to in ring action in July and once again the crazed, manic pace was right there with him. By the end of the year, though, Angle’s body looked drastically different than it did just three years before. He was completely juiced and his head had ballooned to an enormous size, made even more evident by his now shaved head. As 2005 ticked along, word started to leak that WWE officials were a bit concerned with Angle’s lifestyle, mental stability and physical condition. Regardless, he kept chugging along, delivering a complete year of tremendous wrestling, including two damn near perfect PPV matches with Shawn Michaels. After a brief run with the World Heavyweight Title in early 2006, Angle was moved over to the fledgling ECW brand that summer. And that is when things really got weird.

After a few sporadic appearances on TV, Angle was etched in to compete for the ECW Title at SummerSlam, but was pulled off the card at the last minute. Rumors were now very loud that Angle had serious health concerns, both physically and also drug-related, but mainly pain pills stemming from his neck problems. In August, the news came down: Kurt Angle had been released. It seemed impossible to believe that a stud like Angle would be released at a time where he could still deliver top notch matches, but the company felt forced to do so. Angle spoke out after his release and claimed that he asked for time off to heal and recover from his pain but that he was denied, so he asked to be released. Regardless of the initiator, Angle was gone and many both inside and out of the pro wrestling business were very concerned for his health and mental state. And then in walked Dixie Carter. 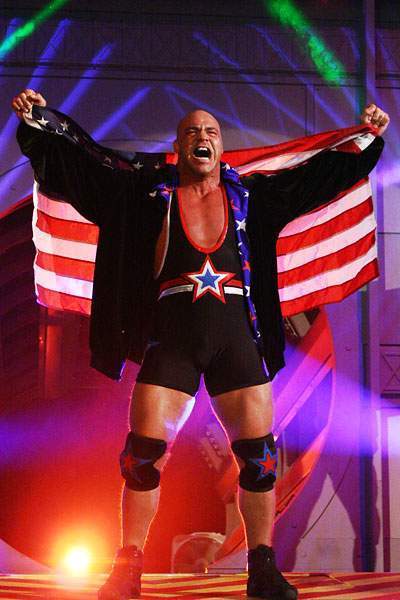 The announcement came on September 26, 2006: Kurt Angle had signed with TNA. Many fans, including myself, were appalled, feeling that Angle was being used by a ratings-hungry company unconcerned for his health and safety. Others thought that the lighter schedule and less grueling travel would actually help Angle heal while still feeding his craving for competition. Angle immediately made his mark in the ring, continuing to deliver excellent matches while slowly trimming back down and starting to look a bit more healthy all-around. However, 2007 would end up being an ugly year for Angle.

On March 6, 2007, Angle’s name appeared in Sports Illustrated article about an HGH and steroid ring, implicating that Angle, along with ten other wrestlers, had been receiving shipments of the illegal drugs. It was also revealed that Angle had failed a steroid test as part of the WWE Wellness Policy while employed with the company. On September 27, Angle was arrested for DUI in Moon Township, PA after a fellow driver had reported him to police, claiming he almost crashed into her. Angle denied the claims and was eventually cleared a year later despite having failed the field sobriety test.

In August 2009, Angle was again arrested, this time due to violating a Protection Against Abuse order that had been requested by his girlfriend, TNA competitor Rhaka Khan (real name Trenesha Biggers). Angle was charged with driving with a suspended license and for possession of HGH while allegedly stalking Biggers. The charges were once again dropped and Angle kept trucking along with a great level of success in TNA. Things flared up again on March 25, 2011 when Angle was arrested for a third time, once again for DWI, this time in North Dakota. Angle would fail the field test and this time, he pled guilty, earning probation and a fine. In September of the same year, Angle was…you guessed it…arrested for DUI by Virginia state troopers. Angle failed yet another field sobriety test, but the breathalyzer test was considered not admissible, so the charges were downgraded to reckless driving, letting Angle off with another fine.

Angle spent the next 18 months out of the headlines, plugging away in TNA, where had signed a new contract after feelers to WWE were rebuffed. And just when things seemed at peace for Angle and he was involved in a heavy TNA angle as part of the Main Event Mafia, the shit once again hit the fan. On August 2, 2013, Angle was arrested for DWI in Decatur, TX. Shortly after news broke, Angle tweeted the following:

I am really glad Angle is finally admitting that he has a problem. I am really glad Angle is finally getting help. I am really hopeful this is the last time Kurt Angle is arrested. We have seen the pro wrestling business destroy many lives. It has taken mild-mannered men and turned them into drug-addled monsters much too often. I have loved watching Angle work his craft in the ring and I would hate to have the memories dashed by another one of our all-time favorites having their lives cut tragically short in a seedy motel room or violent car crash. Angle should be a man professionally remembered for his Olympic medals and WWE titles, not his arrest record.

Kurt Angle was once one of the funniest wrestlers to ever cut a promo. His catalogue of matches is second to none. He has had an awesome amateur and pro career and is an easy lock for any pro wrestling Hall of Fame. Kurt, as one of your biggest fans, I ask you to please be sure you are around to give those induction speeches and enjoy a healthy retirement because the world of pro wrestling has had to deal with way too many prematurely posthumous inductions and been robbed of too many potential legends appearances. As a favor to your friends, family and fans, get your help, straighten out your life and stick around to entertain us with your wit and flare for the business for years to come. It’s true. It’s damn true.