One part history lesson, one part critical analysis, this series will examine the life and times of Captain America in an attempt to derive some deeper meaning contributing to the character’s lasting appeal. Be sure to catch Part 1, Part 2, and Part 3 before delving any further. In this penultimate edition, we focus on Cap’s adventures from the ‘oughts to the present.

Mark Waid’s stint as regular writer on Captain America concluded, for the second time, in 1999. Writer/artist Dan Jurgens picked up the reigns from there, for an unremarkable, by-the-numbers run that did not measure up to his usual standards. A new creative team was announced upon Jurgens’ departure in mid-2001, but there was little enthusiasm for the future of the character. Some rumblings within the community suggested that Captain America had simply run his course and no longer warranted a place in the current comics landscape–especially considering the changes taking place in the increasingly experimental, creatively-driven Marvel Universe overseen by new Editor-in-Chief Joe Quesada and President Bill Jemas. After so many reinventions and retreads, what purpose could this character, originally conceived as a World War II propaganda figure, possibly serve?  A response was provided, in the vilest manner, on September 11, 2001.

In the Marvel Universe, long purported to be the “world outside your window,” the national tragedy could not go ignored. As an immediate reaction to 9/11, the Amazing Spider-Man published a symbolic, non-canon tribute issue. Shortly thereafter, Captain America received a complete revamp, with incoming writer John Ney Rieber and artist John Cassaday reworking their original plans to tackle the events head-on. Captain America would now battle the forces of terrorism in a real-world setting. Indeed, the first issue of their story, The New Deal, sees Steve Rogers assisting in the rescue efforts at Ground Zero, then being chastised by Nick Fury for his pacifist stance, and ultimately pressed into service. 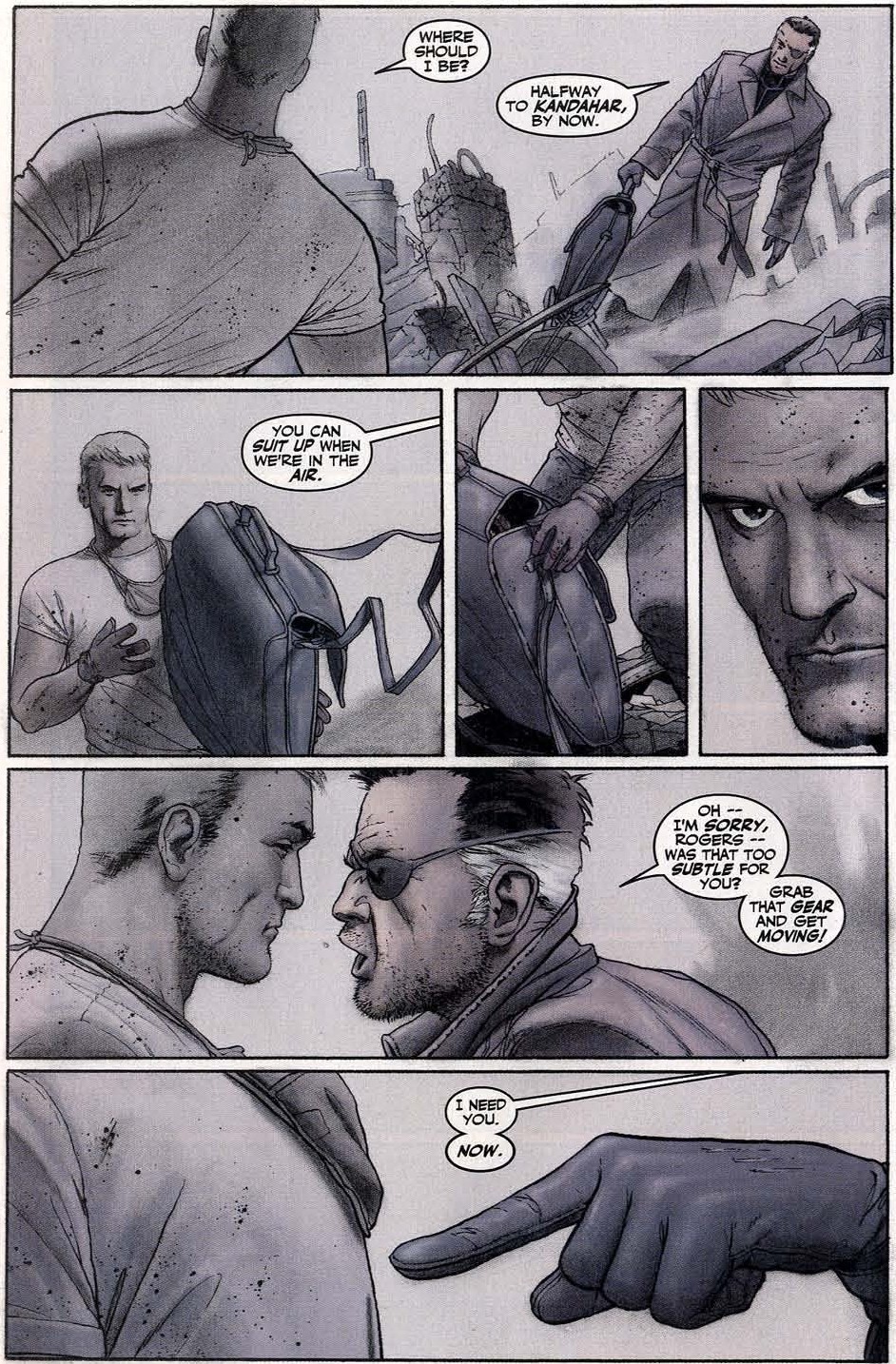 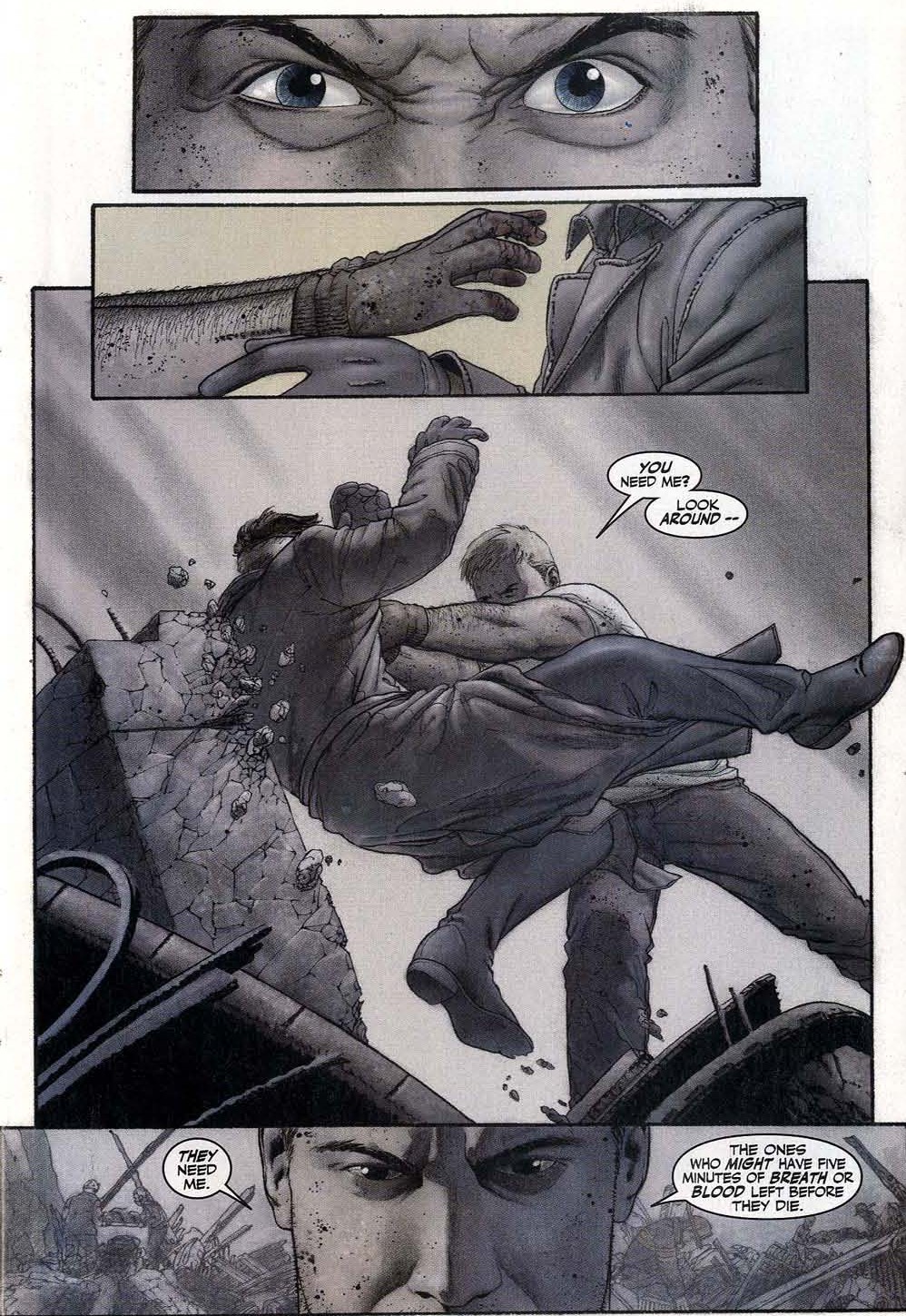 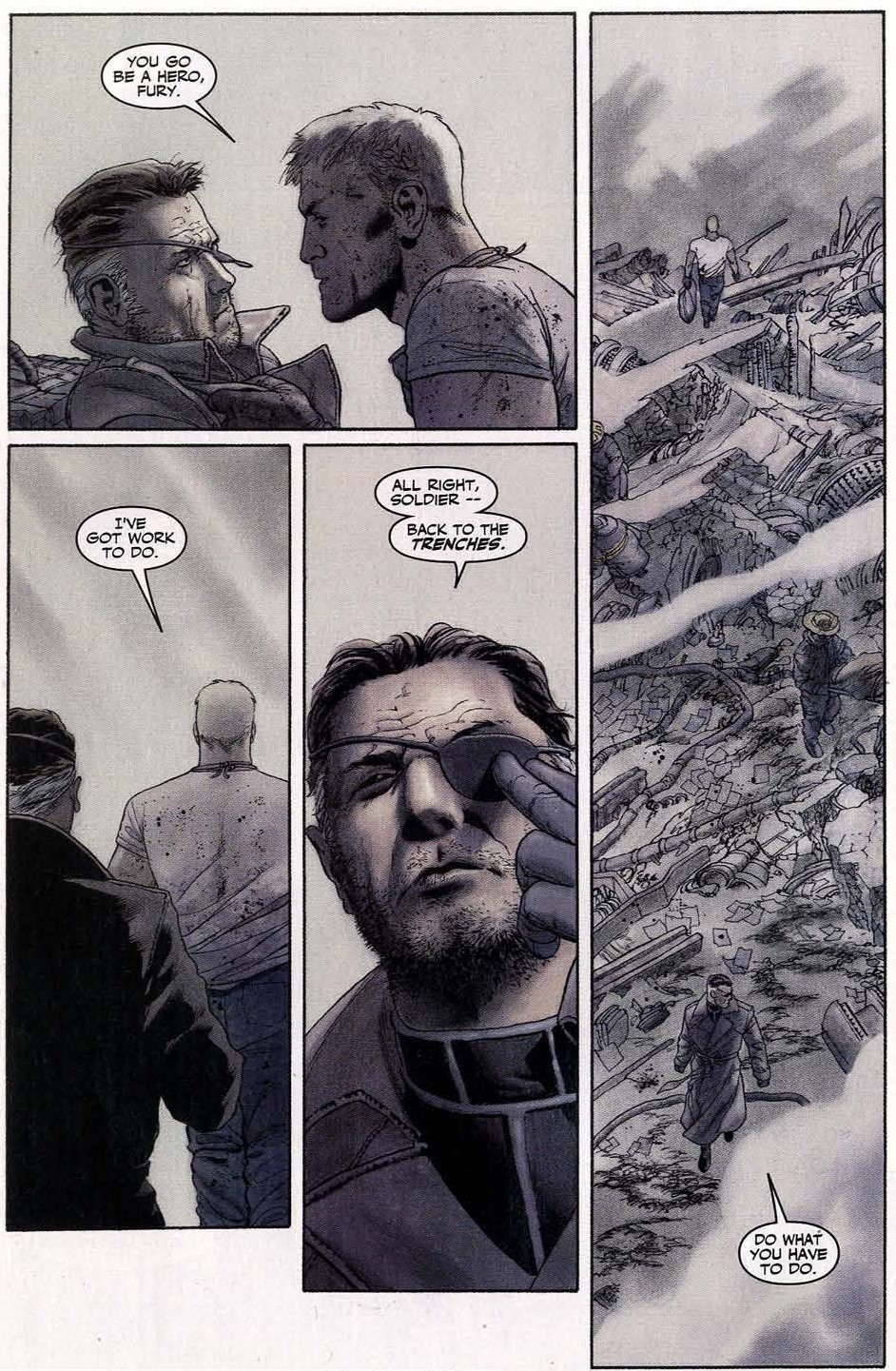 Certainly, not all attempts at social commentary have been met with equal acclaim in Captain America. New York-based Marvel Comics could certainly be forgiven for wanting to say something in the aftermath of 9/11, even if (crass as it sounds) the collapse of the towers was just another perilous day in Marvel’s Manhattan within the context of the stories themselves. Setting these concerns aside, it would likewise be understandable to find a little mawkishness creeping into Captain America comics post-9/11. What absolutely didn’t wash was the cringe-worthy, reductionist attitude towards terrorism and the character’s staggering lack of self-awareness depicted in the resulting stories.

Woefully myopic, Rieber and Cassaday’s The New Deal reads as the byproduct of a terribly shell-shocked populace. This is where I had my first experience in cognitive dissonance as a comics reader. Like, well, everyone at that time, I was desperate for a need to make sense of it all and reach some kind of catharsis in the immediate aftermath of 9/11. Broad, one-dimensional terrorist villains with cartoonishly eeeevil motivations, followed by Captain America making dismissive excuses for legitimately stinging criticisms of United States foreign policy — flagged up by the writer himself — wasn’t the answer I was looking for. Quite honestly, Mark Gruenwald’s ULTIMATUM in the 1980s offered a more compelling and cogent understanding of international terrorism. 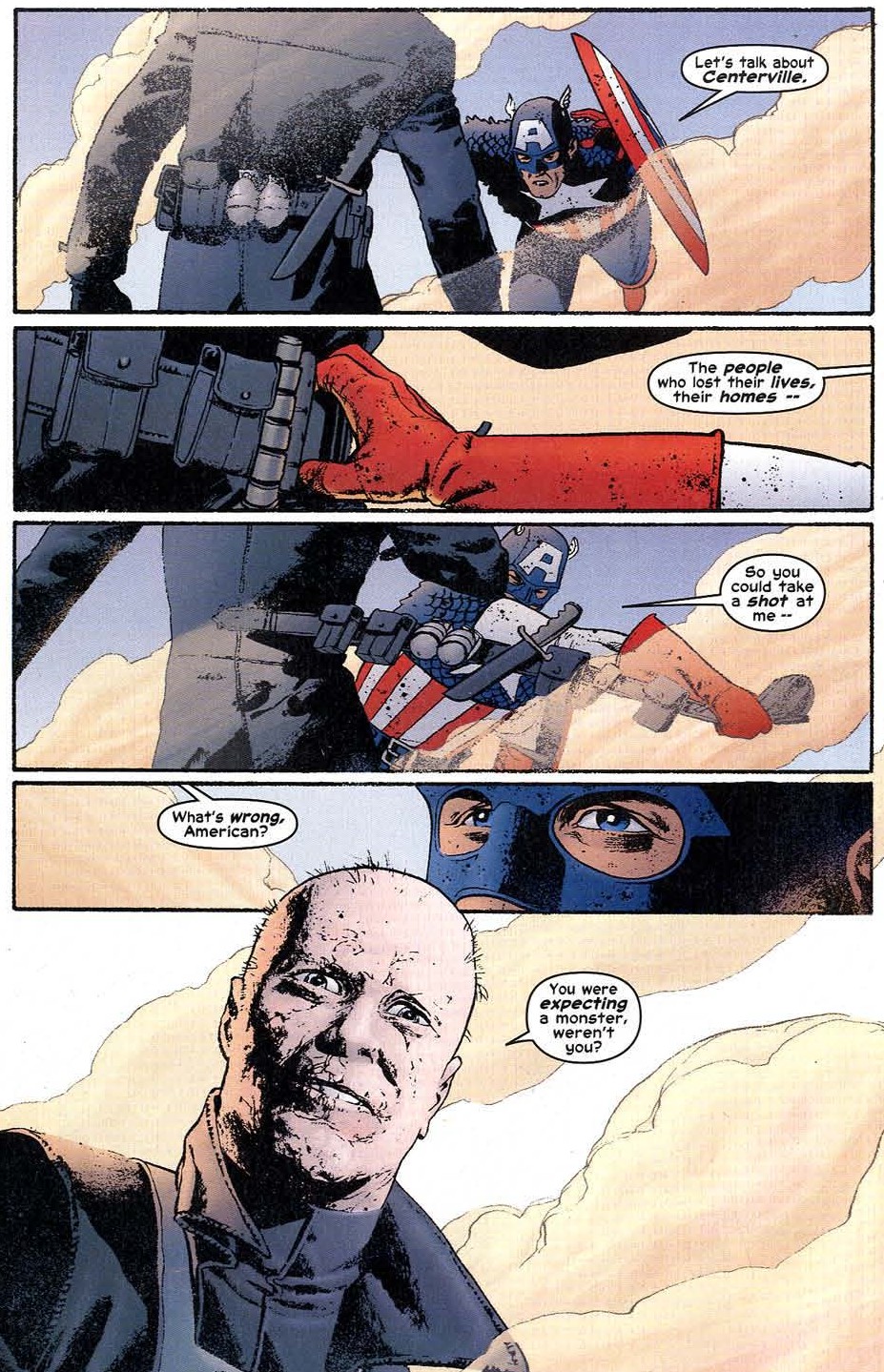 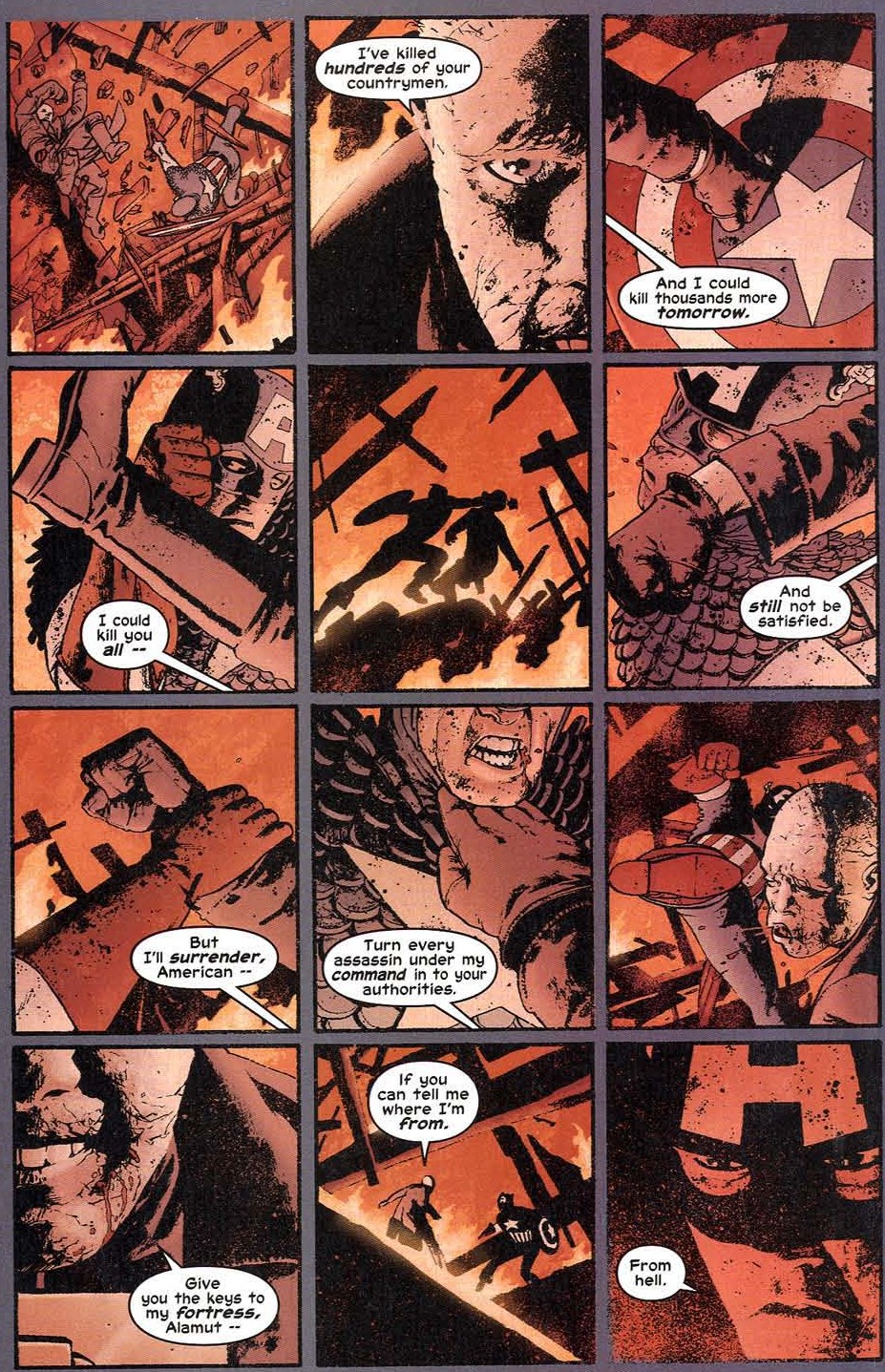 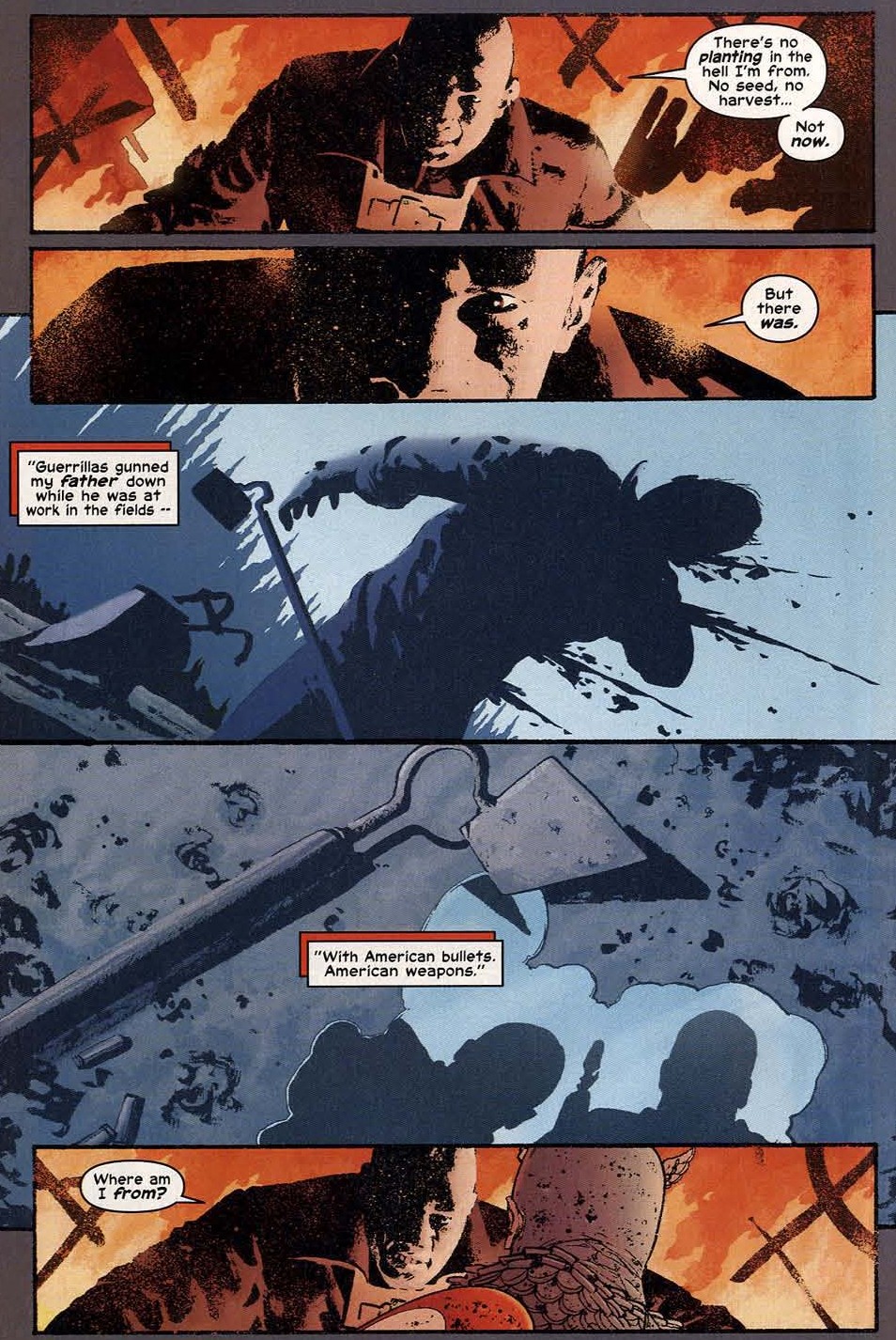 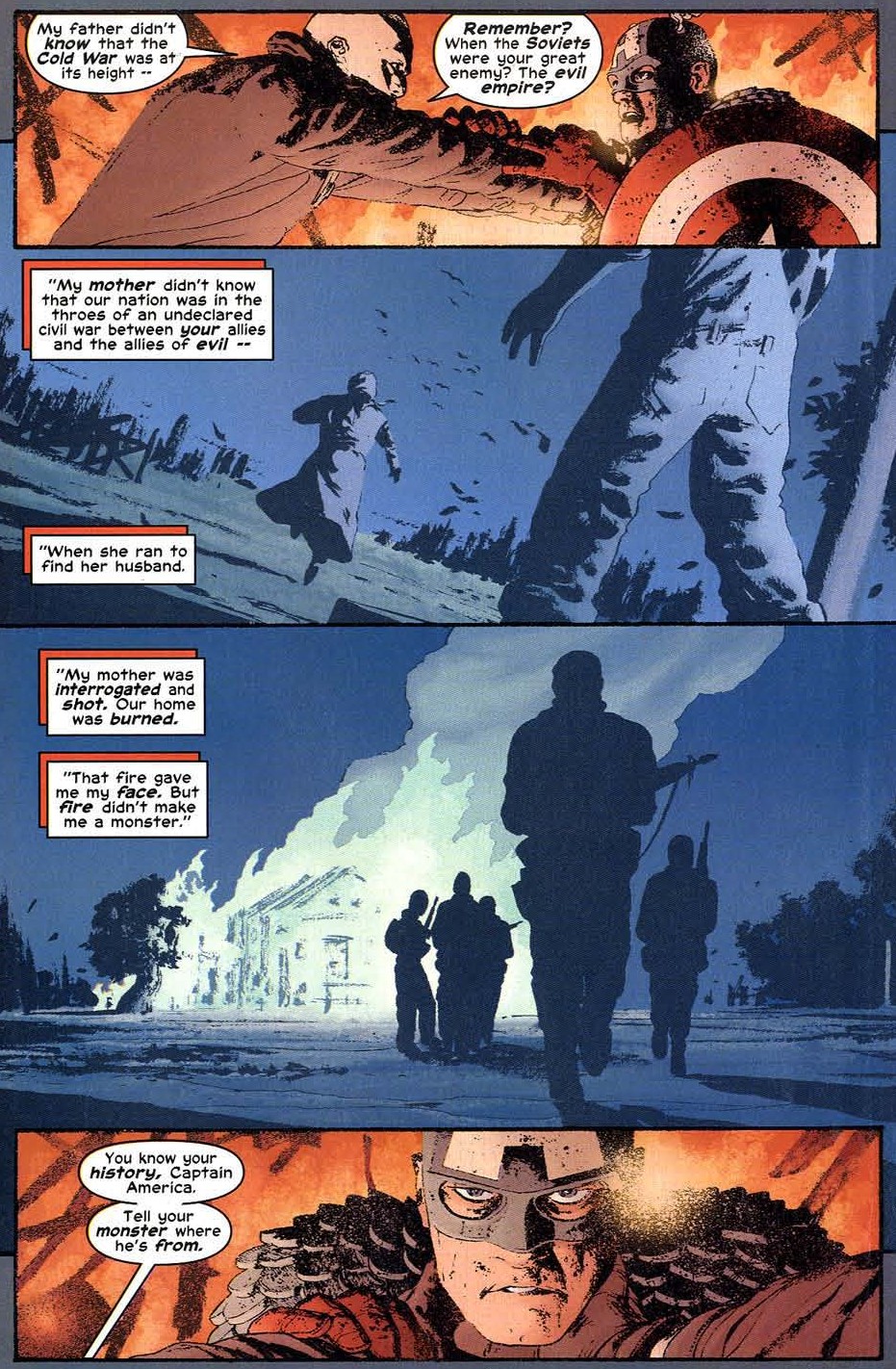 It started to feel like many of the gnawing, troublesome forces I observed in the world around me were piling up in the comics I read. And they were making for some bad comics. I had to question if the writing, particularly on a book like Captain America, needed to match my own political leanings in order for me to find any fulfillment in it. But that didn’t seem right as a solution. Satisfying my own biases wouldn’t exactly immunize the series from the same objections I was grappling with. By this point, I had come to know Captain America as an apolitical character. And this new direction was all so uncomfortably po-faced, having the opposite of its intended effect for me. I hoped I didn’t actively require the comics to rigidly conform to my own world view; I knew, at the bare minimum, that I needed them to be more intellectually honest. 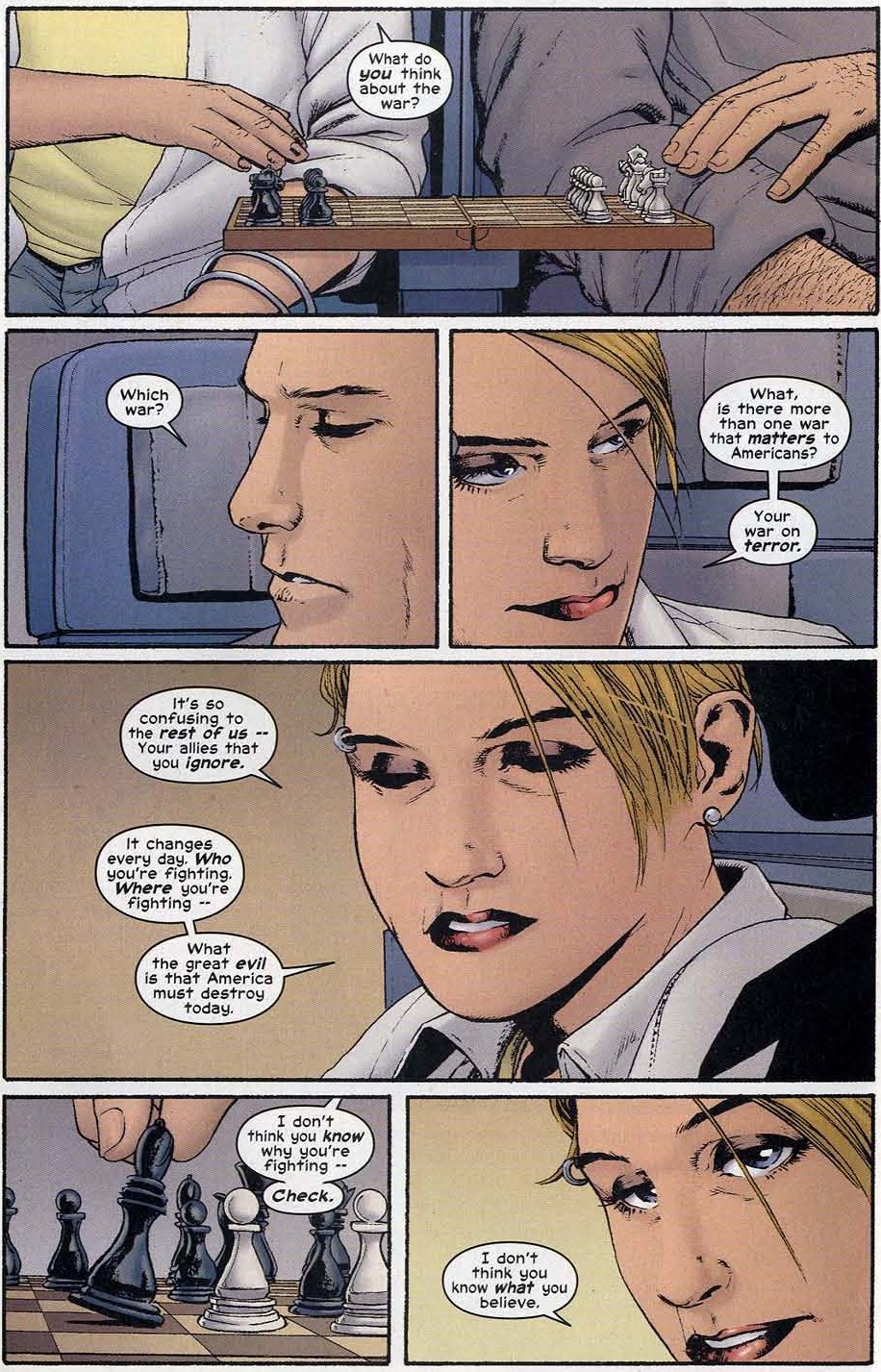 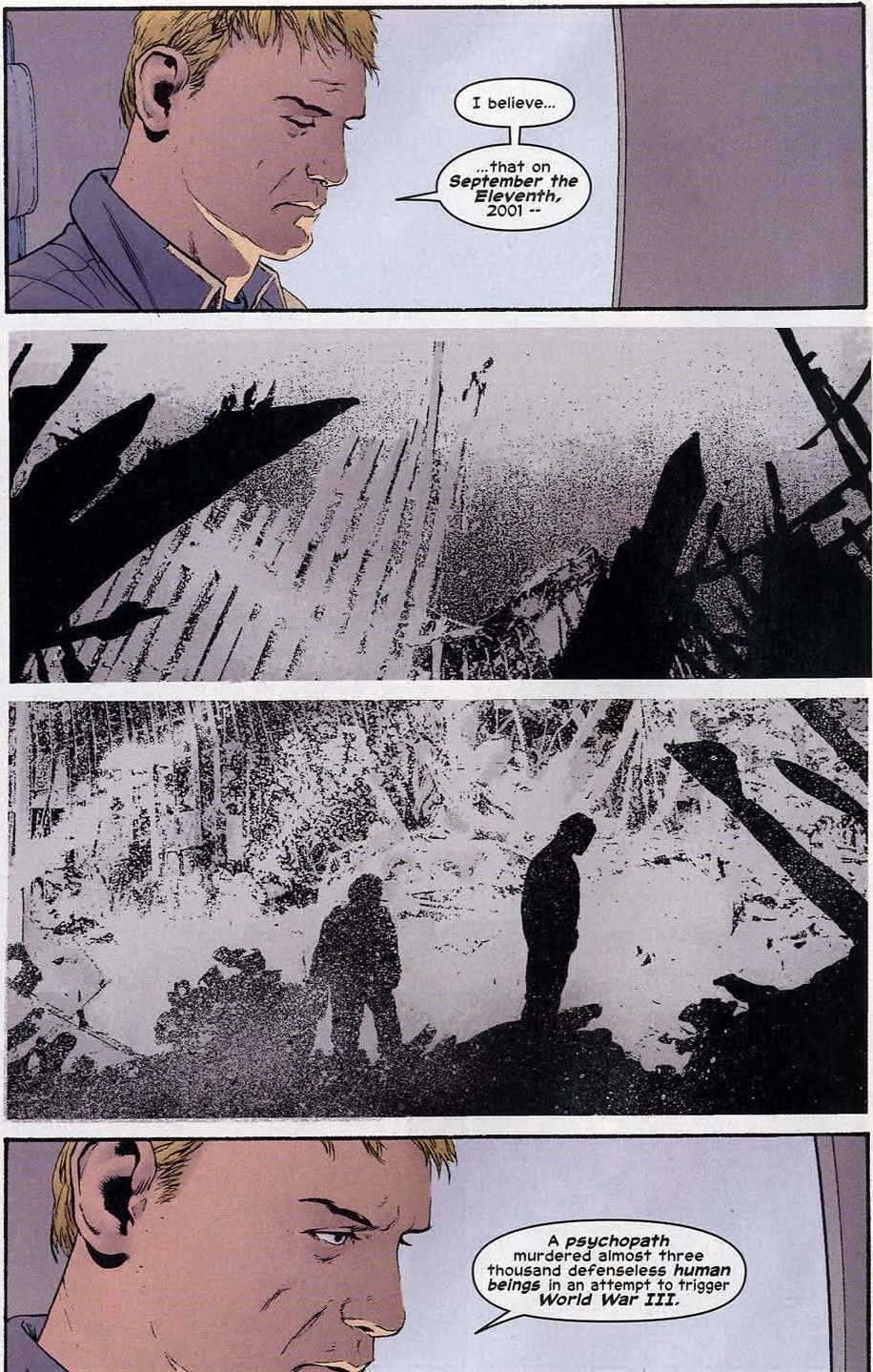 In hindsight, I can’t really hold this fumble against the creators. With time comes objectivity, and we were too close and too traumatized by the reality of terrorism to expect much in the way of a measured examination of the issue in a 2002 comic. Subsequent efforts under Ed Brubaker, accomplished in smart, street-level storytelling both in and out of the superhero genre, would see a return to form. Not to mention nuance. It was the second renumbering for the title in as many years, but making a clean break was for the best in this case, distancing the new series from the baggage of The New Deal altogether. This new Captain America volume is an intelligent, kinetic page-turner that at first seems a callback to the very best of the Waid/Garney days.

From his very first issue, though, Brubaker sets out to subvert expectations. The story appears to be yet another boilerplate (albeit enjoyable) grab for power by the Red Skull. Instead, in the issue’s closing pages, the Skull is seemingly murdered and usurped by new antagonist, Aleksander Lukin, who capitalizes on his scheme. Brubaker’s subsequent introduction and reveal of Lukin’s shadowy agent, the Winter Soldier, proves to be the most daring sea change ever seen on Captain America, overturning one of Marvel’s few unwritten “commandments” in a manner that is astonishingly embraced rather than blasphemous. One would have to be supremely skilled in avoiding spoilers not to know what this is in reference to, but suffice to say there is a certain 2014 critically acclaimed blockbuster that owes much to this particular story.