One part history lesson, one part critical analysis, this series will examine the life and times of Captain America in an attempt to derive some deeper meaning contributing to the character’s lasting appeal. Bring yourself up to speed with Part 1 and Part 2. Here, we look the character’s place in pop culture in relation to the 1980s and 1990s.

Tension between principles and politics carries into the 1980s as explored by incoming Captain America writer Mark Gruenwald. Gruenwald’s unbridled passion for the comics medium and uncanny recall for even the most trivial details of Marvel’s continuity were crucial ingredients to his success on a character punctuated by his rich history and lofty ideals. Beginning his lengthy association with Cap in 1985, Gruenwald set out to bolster the protagonist’s rogue’s gallery by creating adversaries who were not just generic costumed super-villains, but explicitly Captain America villains. To that end, Gruenwald’s additions were designed to function as dark reflections of contemporary society.

The earliest Gruenwald introduction is Madcap: a devoutly religious youth who is exposed to the nerve agent Compound X07 in a horrific bus accident that kills all of his immediate family. He attempts suicide in a moment of despair, only to learn that the chemical has endowed him with incredible regenerative abilities. Instantly able to heal from mortal wounds and unable to perceive pain, Madcap’s belief in a rational universe has been shattered by the senselessness of the tragedy and his loss of agency in its aftermath. He adopts a garish costume and seeks to propagate this new world view, using a secondary ability of inducing “madness” in others via eye contact.

Madcap was a proxy for America’s disaffected, directionless youth. Given the character’s back-story of equal parts sadness and absurdity, Gruenwald made a compelling argument for them. In Madcap, Cap was presented with an antagonist he could not corner and lecture, “If only…” Like Steve Rogers, he was once a well-intentioned young man who did all the right things; unlike Rogers, however, he was dealt a terrible hand by fate. As a study in ordered meaning and practiced discipline, Captain America was now contrasted by a character who demonstrated that personal choices weren’t always sufficient determinants of one’s lot in life.

Later, Gruenwald puts an ugly, exploitative spin on trade unions via the Serpent Society. The Society is a creepy assortment of snake-themed villains banded together around a common interest: job security. A cut above contract mercenaries, membership in the Society promises guaranteed assignments, better resources, comfortable accommodations, protection, and a host of fringe benefits. Quickly establishing their professional precision and effectiveness, the group takes on high-profile jobs from the likes of HYDRA, the Kingpin, and A.I.M. They would be a frequent thorn in Cap’s side, despite having little personal stake in his affairs. Like any group of like-minded individuals routinely working in close quarters, the Society cultivates a code of ethics and culture all their own. At the end of the day, though, they professed no loyalty to any particular ideology. The promise of a regular gig was all that mattered, and membership made certain this was assured through their unique brand of collective bargaining. 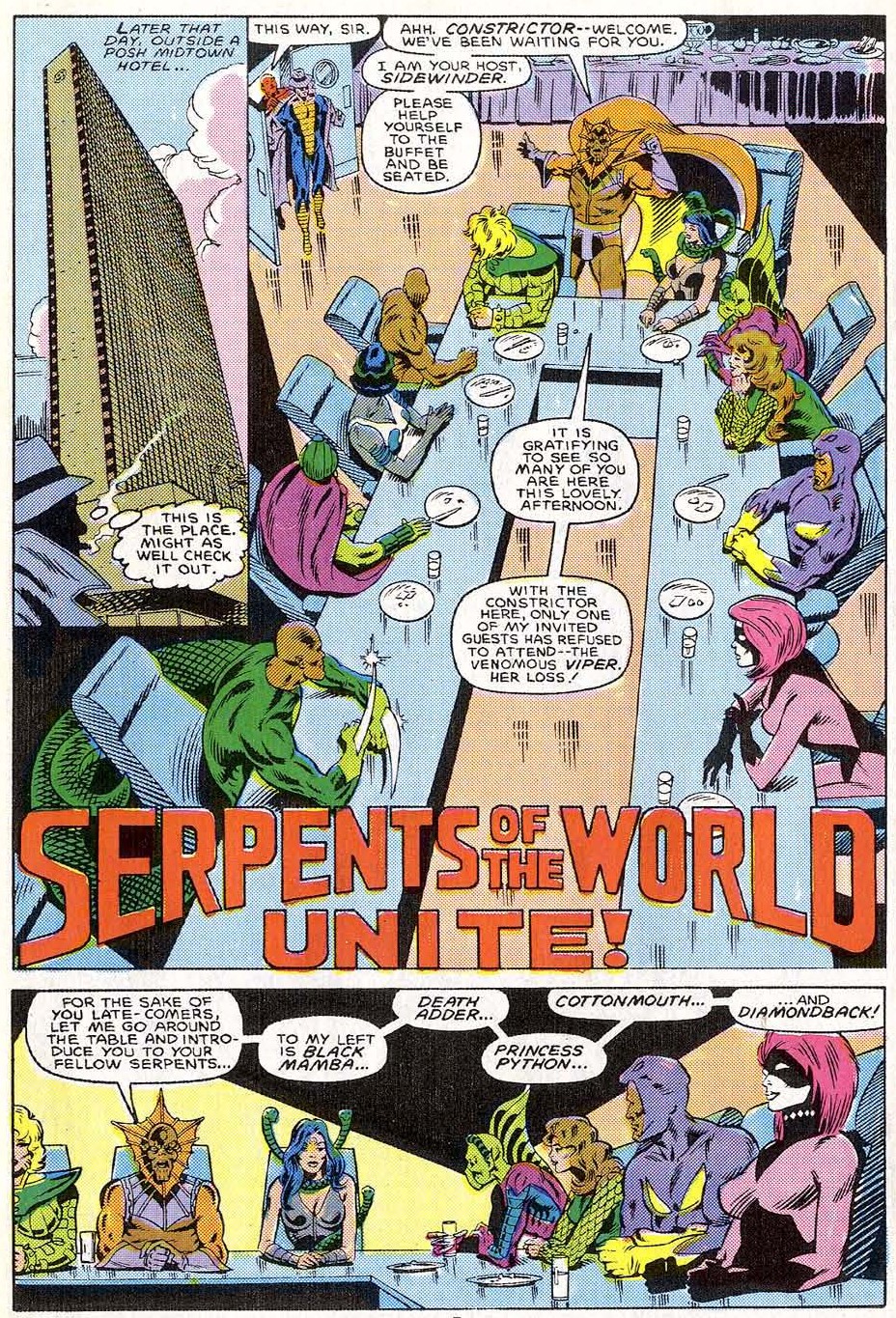 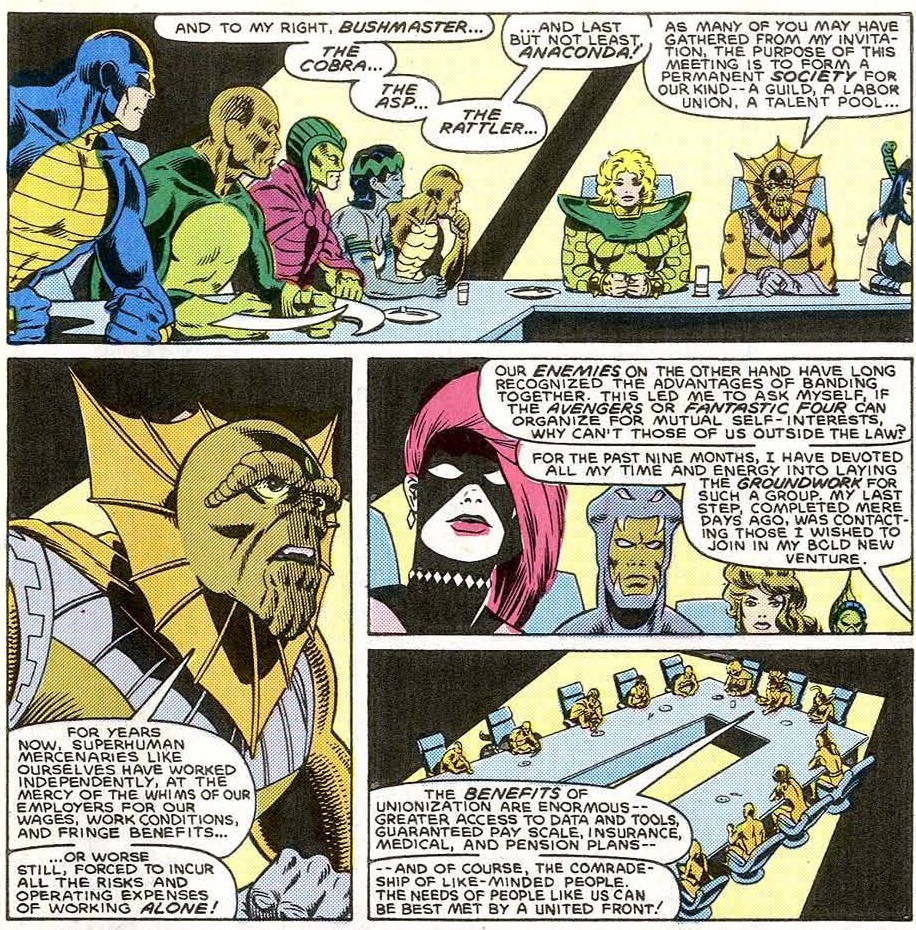 Where ideology is concerned, Gruenwald sets his sights on the world stage with the concept of radical anti-nationalist organization ULTIMATUM. Under the leadership of Flag-Smasher, the group seeks to erase political boundaries and overthrow world governments in an effort to level the playing field for all mankind. They are committed to seeing this vision realized by any means necessary. Though Flag-Smasher himself acknowledges the distasteful nature of their violent acts, he rationalizes away any objections through the greater good he believes he is working towards. Flagrantly patriotic characters like Captain America flew in the face of everything ULTIMATUM represented, placing Cap directly in Flag-Smasher’s crosshairs. Had Flag-Smasher looked beneath the surface, he might have recognized that Cap was a moderate, humanitarian alternative to achieving the very equality he tried to force into existence. 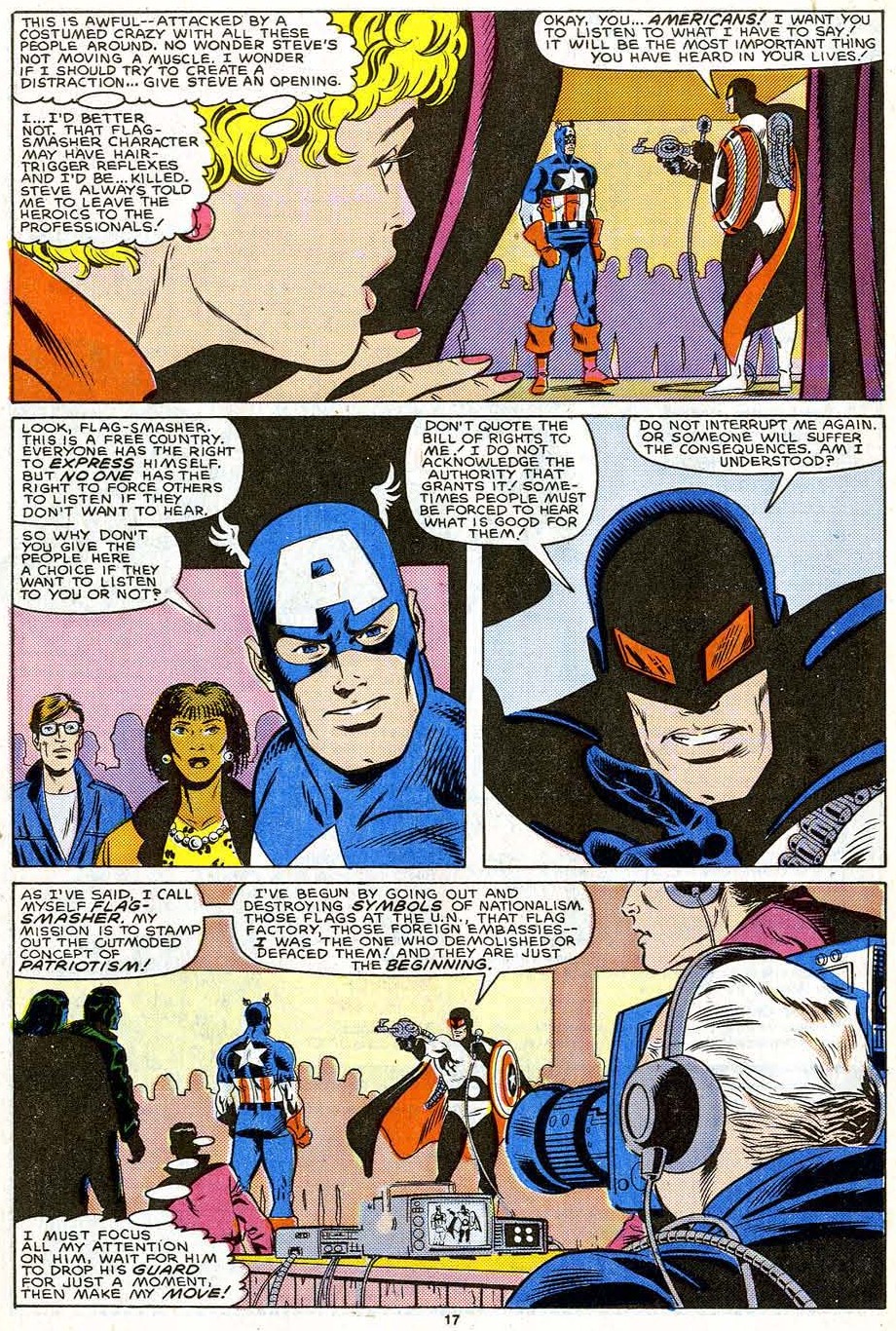 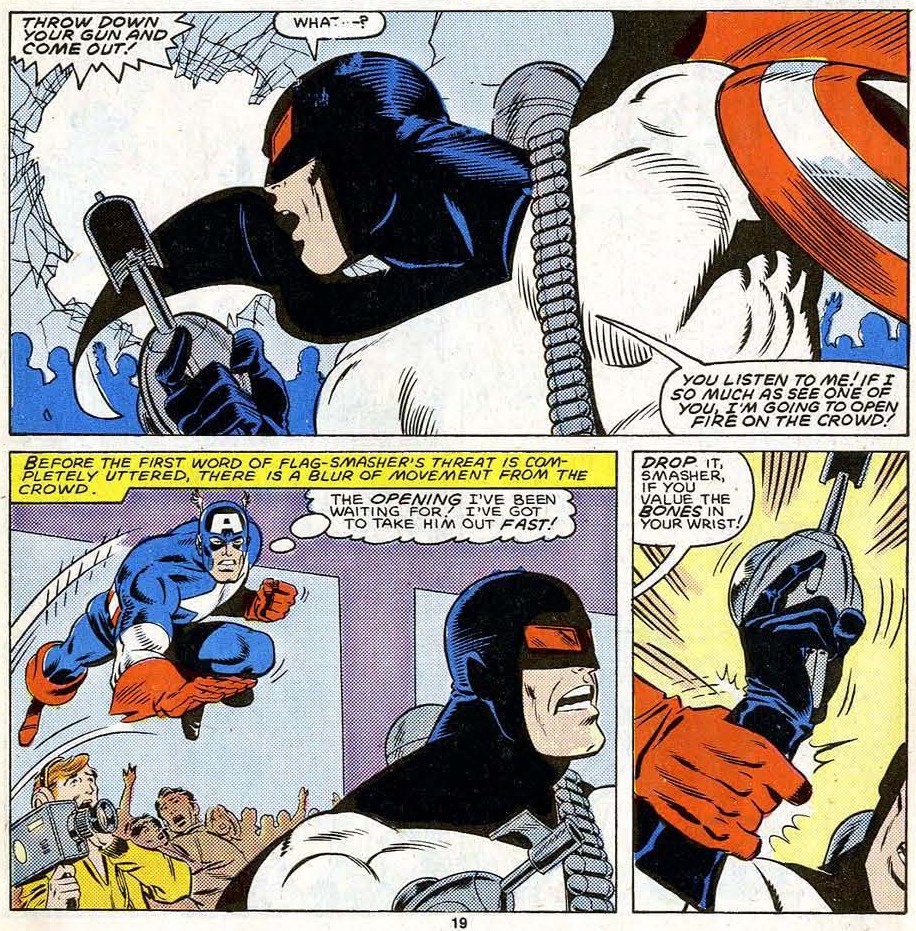