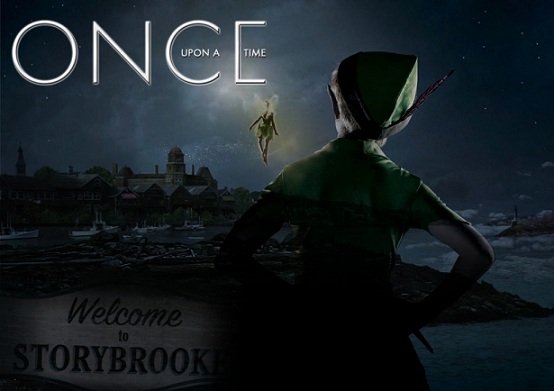 AKA “I Must Have Got Lost”

Well, we are still LOST and running around the Island of Neverland trying to find a way to #SAVEHENRY before Peter Pan can convince him that his place is with him and his role is to restore magic to all the different realms. This week however, it’s all about the guys with all of them acting at least a little bit shady (well , most of them). We also get quite a few reunions and learn that there is lot more history between some of the characters than we had previously known or thought…which just leads to even more questions that hopefully will be answered sooner rather than later.

For starters we get a glimpse into Rumplestilstkin’s past with Peter Pan…which for now is just that: a glimpse.

Fearful that the plethora of enemies (whose personal artifacts make crappy gifts apparently) will try to harm his child the way he would harm theirs, The Dark One is having trouble keeping an adolescent Baelfire from leaving the safety of their home in this week’s flashback. Which of course just leads to him leaving it anyway.  The trail leads to a village that The Dark One threatens (illustrating all of Baelfire’s qualms of course), until he sees the villagers’ are also in a tizzy over THEIR missing children as well and we learn who the culprit is: The Pied Piper.

The Piper though, is actually to Pan what the Beast and The Crocodile is to Rumpelstiltskin: another part of his identity. Seems he wants to attract boys who are….. what’s the word? Ahhhhh right. Lost? That sounds good. I like the ring of it. Anyway, Pan’s flute (get it?) can only be heard by boys who truly feel unloved and abandoned and Bae is in the perfect state of mind to be led away by the seductive sounds of freedom, wildness, and inclusion in any group.

Rumpelstiltskin and Pan have a history going back to their youth (despite appearing a mile apart age-wise) and The Dark One (an “accomplishment” that buddy Peter congratulates him on) notes that Pan is not to be trusted.

As far as Baelfire is concerned, though, neither can his father.

Rumpelstiltskin wants to protect his son from the dangers of life, and like a mob boss who truly loves his family, he knows exactly how dangerous it can be with people like him walking around. Rumple’s own existence amplifies what are typical fears that a parent would have and he wants to lock him away to protect him and also out of fear losing him (or being abandoned by his son). Even after agreeing to let Baelfire choose his own fate, Rumple showed that he didn’t trust his son to make the right choice and that he himself was still very untrustworthy and selfish, the depths of which he would see later. Pan may have also selfishly been trying to win over the hearts of Lost children, but there is something worse about your own father lying time and time again even if ONE of the motivations behind it is love.

What is important to remember is that almost everyone in this family tree here is dealing with the feelings pertaining to being “unwanted” and are good at both being abandoned and abandoning. At minimum they all have regrets  over the various ways that they have disappointed each other: The Dark One and his own father and the guilt over what he did to his own son as well as many others; Bae with his mother AND father along with the way he left Emma; Emma with her parents and Henry;  The Charming Whites with Emma. Even Regina beats herself up over things she has done (though always justifying them).

This is exactly the frame of mind Pan preys on as we see with Henry at the end of the episode: those low feelings where you feel you don’t have anything or anyone else in the world, your vulnerabilities and insecurities just tools used to manipulate. He’ll use anything at his disposal in regards to information to mold your mindset into one complacent with his plots; a snake oil salesman selling an easier life that is child-like and always an adventure. It’s as if he is a drug dealer or a pimp trying to get people hooked on his product; or more appropriately further his hold on weakened individuals. “You know I love you” doesn’t seem like it would be a stretch.

That magic may be the drug of choice in these wonderful Fairy Tale realms has been dealt with ad nauseam as well the as “Nasty Habits” associated with selfishly pursuing one’s own agenda. As we see here, in Rumple’s case it is self-preservation and power that matter most – all the other habits in service to staying alive and staying on top. The obvious intended metaphor is addiction, much like with episodes centering on one’s inability to stop using magic. Like those who fall victim to the vices and instruments of escapism in the “real world,” their behavior has profound effects on everyone else around them.

Children of addicts will tell you how frustrating it is to have to learn NOT to trust people you are supposed to be able to trust always. In this regard Baelfire was lucky to be forced to grow into adulthood away from his father. In some ways he was lucky to have found himself in Neverland originally after being sold out by Hook. Because without those experiences he wouldn’t have learned to make his own way and the resourcefulness he had to depend on. He learned a lot from his various “dads” he had along the way which we saw in the way he was able to trick pan, his father, and hide his map of the stars the gang found in his old cave (something he learned from Hook).

And that is why it is almost tragic that Baelfire (I mean Neal!) doesn’t believe his father after Pan tells him about the deal they made for Henry, even if Rumple’s protestations that he has changed are true. Rumple thinks he is going to is prepared to die to save Henry, “accepting” his fate that the seer had told him (erroneously thinking his undoing means death). Neal doesn’t buy it though and thinks that his father hasn’t changed at all since abandoning him for his Dark One Dagger all those years ago. Sadly, we learn that lesson too as an emotionally defeated Rumpelstiltskin appears to have embraced his old ways by episode’s end, a story too familiar to those who have seen loved one held captive by their addictions, whatever it may be.

I have said it time and again in my reviews this season that the Island setting is really highlighting the common themes between Once Upon A Time and LOST, but every week there is more and more commonalities and it is impossible to ignore.

This week’s episode really drove home the following: The word “lost,” which was repeated QUITE often; not being able to leave the Island; leaving it and returning; the promise of the Island not being what it seemed (like with the Dharma Initiative); trust issues; Daddy issues; redeeming oneself and the struggle to change; fate, destiny, choice and specifically whether or not we have choice or if we are instead still affected by what our destiny was supposed to be? If we choose to act not in accordance with the way we are supposed to, is it our duty to try until we get it right? How many chances do we get?  How long before we make up for the dishonest deeds we have done? People like Rumpelstiltskin and even Snow and Charming seem determined to right the wrongs they have committed (even if Rumple is easily led astray by his own “dark passenger” or Man In Black. Is Pan the Man In Black here or is it The Dark One himself? Who is the Jacob here?

It will be interesting to see how long these similarities continue and whether or not it strays from message that resounded so bombastically in LOST.