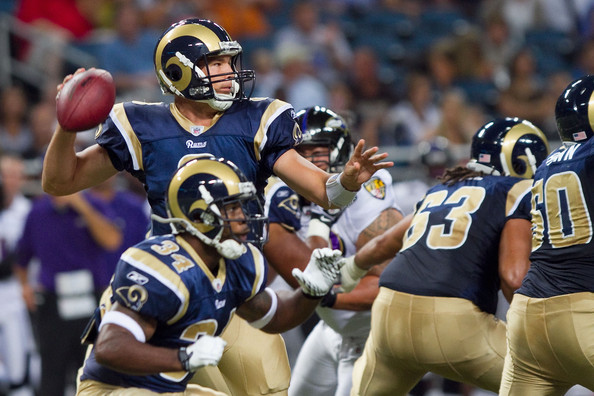 After finishing 2-14 in 2011, the St. Louis Rams were aggressive in the next year’s draft, trading down twice in the first round to pick up a slew of future picks. After winning just seven games in 2012, the team targeted improving the offense as a priority, and was active in both free agency and the draft. The new starters will have their work cut out for them improving on that win total, as they face one of the leagues toughest schedules. If they fall out of playoff contention, the team’s biggest priority will be the continued development of quarterback Sam Bradford. The size of his contract doesn’t leave the Rams with many other options, so it’s in their best interest to help him succeed.

For the first time since 2003, the Rams will head into the season without Steven Jackson in the backfield. After racking up more than 10,000 yards, the most in team history, Jackson signed with Atlanta in March. Daryl Richardson will replace him in the starting lineup; he was effective in a backup role last year. Several new faces will join Richardson, as St. Louis invested heavily in the offense this offseason. They signed marquee free agent Jake Long to take over the left tackle position. There are injury concerns, but Long is one of the best in the league when healthy, and should help stabilize an offensive line that lost starting center Rob Turner to free agency. The Rams also picked up tight end Jared Cook, hoping he will finally play to his potential, and traded up in the draft to select college star Tavon Austin, who is undersized but has game-changing athleticism. These moves give Sam Bradford a number of new weapons to throw to, and should improve the team’s average offense.

Of course, all the resources invested in the offense had to come from somewhere, and the defense saw a lot of turnover in the offseason. Starting safeties Quintin Mikell and Craig Dahl are gone, along with third corner Bradley Fletcher. The front seven, on the other hand, is unchanged for the most part; the only new starter is Alec Ogletree, the team’s other first round pick. He’s been a star in the preseason, and if that carries over to the regular season he should help the Rams survive the losses in the secondary.

The Rams won’t have to wait long to see Steven Jackson in another uniform, as they travel to Atlanta in week 2. Their first three division games (two in primetime) are all at home, which is good for their chances for starting strong. But the good news ends there, as they face the fourth-toughest schedule in the league and play in what looks to be the toughest division.

Yet again, all eyes will be on the young quarterback looking to prove he can lead a franchise to the championship. The Rams had the misfortune of drafting Bradford under the terms of the previous Collective Bargaining Agreement, and are heavily committed to him from a financial perspective. Luckily for him, that means the team has every incentive to make sure he succeeds, as can be seen from their offseason additions to the offense. Bradford’s career has been up-and-down to this point, and this should be the season we find out what he’s capable of.

I’m not sure what to make of St. Louis’s 2012. On the one hand, they improved by five wins over the previous season, went 4-1-1 in one of the league’s strongest divisions, and finished twelfth in Football Outsiders’ DVOA. On the other hand, they lost to a mediocre Miami team, struggled to beat a crappy Buffalo squad, and were massacred by the Patriots 45-7 at home. They were outscored by almost 50 points, and actually exceeded their expected win total (6.6). They had a top-10 defense, but a bottom-10 offense, and made addressing that weakness an offseason priority. The Rams are likely to be better in 2013, but so is the rest of the division, and the improvements aren’t likely to show up in the team’s record.

It’s difficult to predict the future of any NFL team, but the Rams are especially tough to read. The players they picked up in the offseason should pay immediate dividends on offense, and in Sam Bradford’s continued development. But they face a brutal schedule, so any improvement may not show up in the win column. There is always the possibility of division rivals San Francisco and Seattle faltering, but for now, the division appears to be theirs. There is a lot of talent on the roster, and the Rams have two first-round draft picks next year. This may not be the year the team returns to the playoffs, but the future is bright. 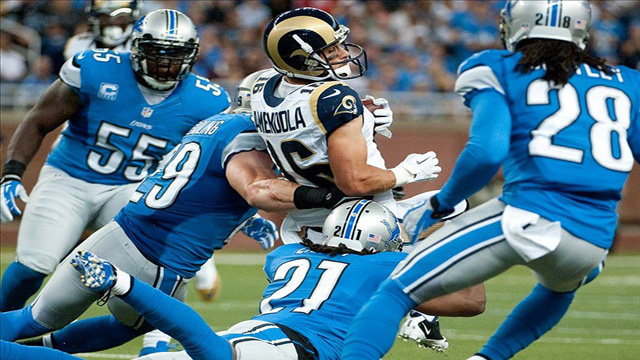 After reaching the playoffs in 2011, the Detroit Lions returned to their losing ways by going 4-12 in 2012 with virtually the same team. The Lions will enter the 2013 season having lost their last eight regular season games. They haven’t won a game since November 11th, 2012. There is no doubt that the Lions have a good offense led by Matthew Stafford at quarterback and perhaps the most dangerous wide receiver in this era, Calvin Johnson. However, their defense hasn’t been strong (even when they went to the playoffs) and at times it appears that the coaching staff loses controls of the stars on the team. Jim Schwartz needs to get control of his team and he needs to do so quickly.
Key Additions & Losses
Additions: Reggie Bush (RB, FA), Chris Hope (S, FA), David Akers, (K, FA) Ezekiel Ansah (DE, draft)
Losses: Jahvid Best (RB, released), Jason Hanson (K, retirement)
The Lions addressed a few areas that could greatly help their team. When Jahvid Best was healthy and able to play he gave the Lions a good running threat. Sadly, he couldn’t overcome a concussion and was released. Reggie Bush was signed to a four year deal and should be able to help both in the passing and rushing aspect of the offense. Bush has a history of knee injuries, but was able to stay healthy last year for the Dolphins. Detroit addressed their secondary as well and their defensive line. Also of note, longtime kicker Jason Hanson retired and was replaced by David Akers. Akers struggled last year for the 49ers hitting 29 of 44 field goals. It was the first time in his career that he had double digit misses. Judging by the additions, it’s hard not to get excited for the Lions. They may just end up disappointing you.
Key Games
Green Bay (Week 13), @Baltimore (Week 15)
There are two games this season for the Lions that are of major interest. The first one being week thirteen where they will play the Green Bay Packers on Thanksgiving. The last time the Lions won on Thanksgiving was November 27th, 2003. That’s a long time and the Lions have to win eventually. I know I’ll be watching that game as per usual on Thanksgiving. The second game of interest comes two weeks later. Stafford is regarded as a possible elite quarterback, and elite quarterbacks are able to beat great defenses. The Lions have a good defense and the Ravens have a good defense every year it seems. That kind of match-up catches my interest.
Player to Watch
Reggie Bush, RB
I could have gone with Stafford or Johnson, but I believe any success the Lions look to have this year falls squarely on Reggie Bush. The Lions need to have an established running game and Bush continues to be hyped up as being a huge asset for the team. If Bush can produce anywhere near the numbers that have been reported or suggested by Bush himself, then the Lions could have one of the scariest offenses in the league.
Better or Worse
2012 Finish: 4-12 ( 4th PLACE… MISSED Playoffs)
2013 Prediction: 6-10 ( 4th PLACE, MISS PLAYOFFS)
A slight improvement from the previous year, but the main issue for the Lions is the defense. I’m not sold on this team when it comes to making stops when they need them. If I was judging this team strictly on offense then they would have double digit wins, but that isn’t the case in the national football league. Regardless, this will be a fun team to watch offensively and if they are behind in games often like they were last year, I’d expect Calvin Johnson to break 2,000 yards receiving. He came very close to that number last year.
Final Thoughts
Part of me wants to like the Lions, but they just aren’t strong enough on both sides of the ball to warrant a higher placing. Considering the franchise has never been able to have something to be happy about, I hope they are able to put something special together and surprise everyone like they did in 2011. Maybe they will since there aren’t high expectations, which is similar to the 2011 season.