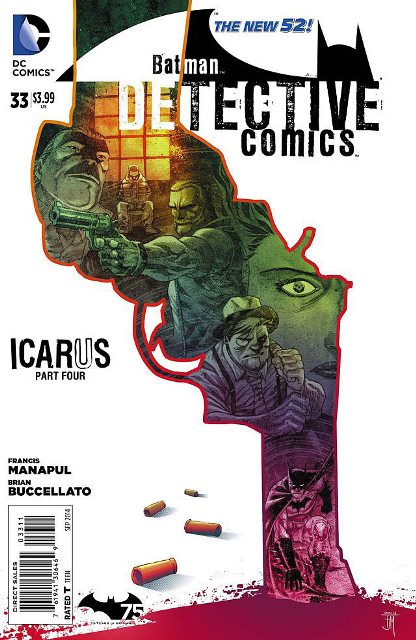 In “Icarus” part four, Batman must contend with a gang war between The Squid and the Kings of the Sun before it consumes all of Gotham City! But can even the World’s Greatest Detective defuse a blood feud that’s about to go nuclear?

Picked because: Every part of this Icarus story arc has been pure gold! Any fans who say they wish the Batman books were more like Batman: The Animated Series from the 90’s need to be reading this. For the last three issues it’s been all mystery story with Batman hot on the trail of the drug manufacturers who caused the death of a poor activist on the steps of Wayne Manor. As the story has slowly unfolded, we readers have been given lots of clues but no firm answers which is great considering this book has not really lived up to its namesake since the 2011 reboot. And Harvey Bullock fans should be hanging on every issue as he’s just as hot on the trail of the killers as Batman. The parallel between the two is fantastic. Manapul and Buccellato just get what makes Batman a great noir character and…Dat Art! Manapul has made quite a name for himself at DC through works including Superboy and The Flash and he can now add Batman to that list. This is a more classic art style than the creative layout-based art he used on Flash, but it’s no less gorgeous. And best of all, this story feels very self-contained. It lightly mentions the events of Batman Eternal, but that was clearly just to establish that this is in continuity. Aside from that, this is for those who just want a good Batman detective story without all the hoopla of the larger Batman event. While Batman and Batman Eternal are incredibly strong books, Detective Comics is quickly becoming the best of the bunch. 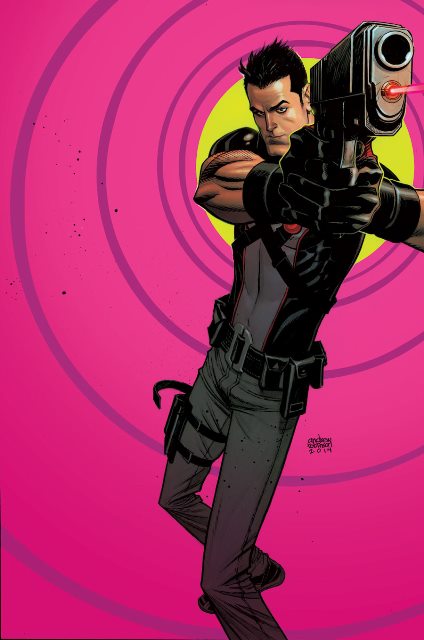 A thrilling new chapter of Dick Grayson’s life begins in this new, ongoing series. It’s a super-spy thriller that will shock you and prove one thing: You might think you know Nightwing – but you don’t know Dick.

Picked because: Admittedly, the idea of Dick Grayson no longer being Nightwing and becoming a “secret agent” doesn’t sound like the best direction for the character. However, the creative team attached to the title makes it worth a look. Tim Seeley has been knocking them dead over at Image with his hit series Revival and he’s been immersed in the Batman Family as a co-writer on Batman Eternal. And, if you’ve never seen Mikel Janin’s art before, you’re in for a real treat as he’s one of the absolute best in the businesses. Grayson did “die” in Forever Evil #6 but was revived by Lex Luthor. Upon the defeat of the Crime Syndicate, Batman decided it would be best for Grayson to stay dead since his secret identity was revealed to the public. Only Batman, Luthor, Catwoman and Cyborg know the truth. Tom King is the series co-writer and while he has no experience writing comics, he is a former CIA counterterrorism operations officer (aka, real-life spy!). Seeley is handling the scripts and co-plotting while King is adding his expertise to the proceedings. Should make for some really interesting reading. Of course this is a temporary situation, as anyone who’s ever read comics could tell you, but it could be a fun one, too. Only one way to find out… 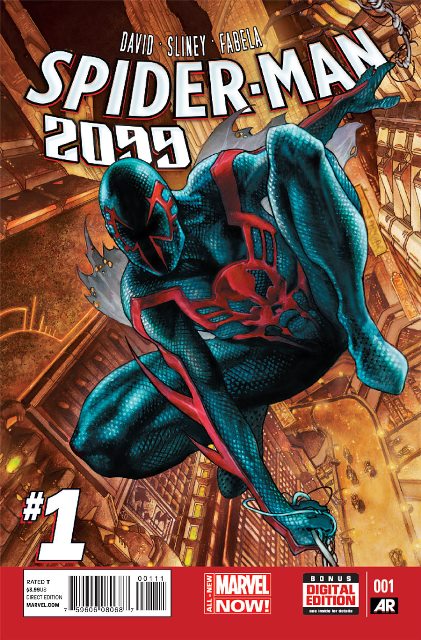 Art by Will Sliney
Cover by Simone Bianchi
$3.99

The book you have been demanding for months finally hits the stands! Miguel O’Hara is Spider-Man in the year 2099 but he’s currently stuck in the year 2014. He was stranded here by his father who is the head of an evil corporation called Alchemax in 2099. But in 2014, Alechmax has just been formed and Miguel has a chance to stop its corruption before it starts! You’d think being a man out of time would make you a man without enemies, but Spider-Man 2099 is about to discover that he’s not the only one hoping for a better tomorrow, one that might be ensured by The Adjustor eliminating Miguel from the time stream altogether!

Picked because: Peter David getting a second shot at writing his one-time-hit creation? Yes, please! Of all the 2099 series from the 90’s, Spider-Man was probably the most successful and well-realized of the bunch. It wasn’t always a glowing success and had its ups and downs, but it was still a decent series that maybe could have gone further. Now, after a really fun story in Superior Spider-Man by Dan Slott, we’re getting Miguel O’Hara in the modern world. Peter David is known for writing big action but with lots of good humor mixed in and the opening pages of this issue show that he hasn’t really lost a step with his creation. While the original series was heavy on the sci-fi, this one is taking a more “fish-out-of-water” approach. The culture of 2014 is vastly different than that of 2099 and severely limiting Miguel’s resources makes this a much bigger challenge than any he’s faced before. The Spider-Man family of titles is at a real peak right now in terms of quality and this one looks like it could easily join them in becoming a big seller for Marvel. 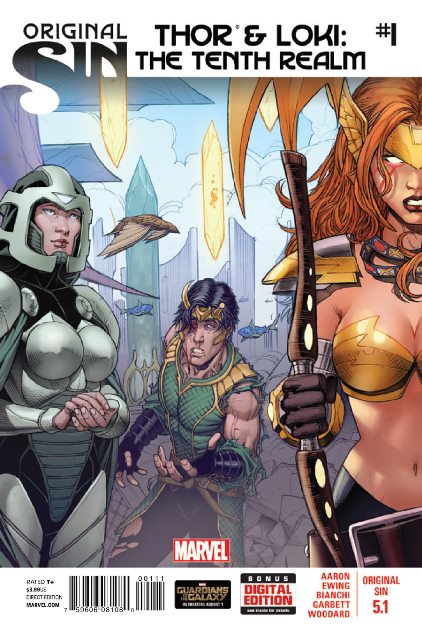 Picked because: Have you been reading Jason Aaron’s Thor: God of Thunder? Of course you have, so you’ll want to grab this, too. Aaron’s grasp of the characters and concepts has proven to be second-to-none and integrating the newly-acquired Angela (yes, that one from Image in the pages of Spawn) should be left to no one else. Sure, Brian Michael Bendis wrote her in the pages of Guardians of the Galaxy, but this is where she truly belongs. As it turns out…she’s Thor’s sister! This newly discovered Tenth Realm is sure to reveal lots of other secrets, too and will tie into the larger Original Sin event. If you’ve been reading that, you’ll probably want to see this, too. This issue is labeled as Original Sin #5.1, but it could easily stand as its own story. Aaron’s run on Thor has added lots of interesting aspects to the mythology, so expect this to spin into a new story arc in the pages of Thor: God of Thunder sooner rather than later. This is also the first time the new Al Ewing Loki has crossed over with Aaron’s Thor so it could easily affect the events of that title, too. 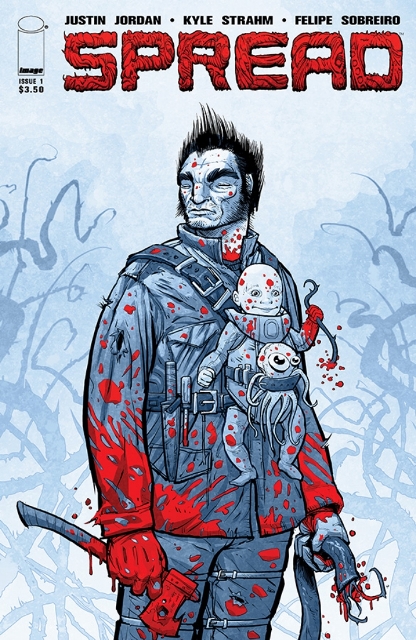 Ten years ago, we dug too deep. We unleashed something ancient that couldn’t be controlled. Something that couldn’t be stopped, twisting everything it touched into more of itself. The Spread. Humanity was nearly destroyed before we found a way to slow the Spread to a crawl. Now, deep inside the quarantined zone, one man has found the key to stopping it forever: a baby girl. And if he can save her, he might save the world.

Picked because: What would The Road have been like if John Carpenter’s The Thing had been at the center of it? Looks like we’re about to get an answer to that. Justin Jordan is at the top of his game when he’s working on his own creations (Luther Strode, Dead Body Road) and this is a title he’s been very passionate about in recent interviews. If you’re a fan of the aforementioned stories and/or James Cameron’s Aliens and maybe Zombieland, you’ll want to pick this up tomorrow. It’s hard to produce a truly scary comic in the modern age, but the early word is that this (along with Robert Kirkman’s outstanding Outcast) might be one of the scariest comics produced in years. If intensity is something you like in your comics, you’re not likely to find anything better than this at the shop this week. Image doesn’t usually invest in things that don’t have massive hit potential and this one looks to be brimming over with it. You’ll try it for Jordan’s writing, but you’ll stay for the Kyle Strahm art. It’s equal parts disturbing, beautiful and disgusting with all the fast-paced action anyone could want in a debut issue. Get on this one before it spreads. 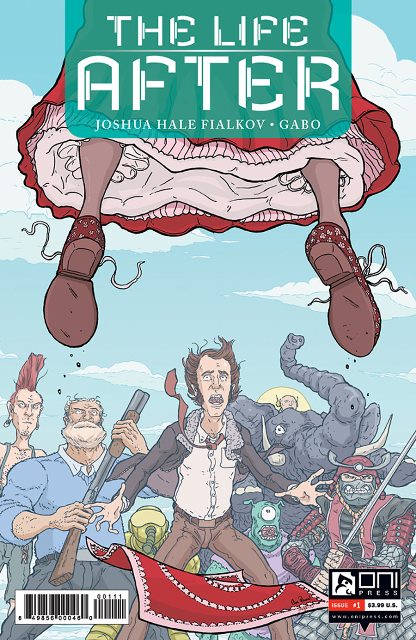 The Life After #1 – Written by Joshua Hale Fialkov

In an infinite city built on infinite sadness, there is one man capable of breaking free. He will go through Heaven and Hell to save us all. Literally. A fantastical coming of age journey through the afterlife and beyond from Joshua Hale Fialkov (THE BUNKER, THE ULTIMATES) and breakout artist Gabo.

Picked because: Who hasn’t felt like their life was just a set of repeating circumstances and that we just lack the strength necessary to really do anything about it? But what if one person finally does make a change? Fialkov is a talented writer who’s been largely hit and miss when it comes to his mainstream comics work, but a solid hit in his indie pieces. After the breakout success of The Bunker, it looks like he’s ready to hit twice in under a year with yet another creator-owned title. Oni Press has been making some serious moves lately with their slate of creator-owned titles and it’s paying off. This one sounds like it has a hint of Dark City with The Prisoner and The Truman Show-style storytelling. The comics medium has branched into some great new territories over the last decade and this looks like another potentially great title. Gabo’s art is both classical and modern with some interesting layouts that draws the eyes in and then gives them something to really feast on. Sounds like a good time just waiting to be discovered.