Art and cover by Ivan Reis and Joe Prado

A FOREVER EVIL tie-in! With the Justice League still missing, a barely functional Cyborg will need help if he’s going to take down the Crime Syndicate! To do that, he must find Doctor Will Magnus!

Picked because: Cyborg is back! Geoff Johns has put together one of the most exciting events in recent memory and this particular title has been one of the best tie-ins. The last few months have been about building backstories for the Crime Syndicate but now we’re going to see the good guys mount a real plan. Oh, and we finally see the Doom Patrol! That’s a lot for one issue, but this is shaping up to be a great issue. Not to mention how beastly Ivan Reis is on everything he pencils. As much as I loved the Jim Lee run on this title, Ivan Reis has all but declared ownership of it. He and Johns together is just golden.

“ZERO YEAR” reaches an all-important crossroads as Batman and Jim Gordon try to turn the lights back on in Gotham City. This issue leads directly into the final arc of Zero Year, which begins here next month!

Picked because: Even though you know Batman survives what’s happening it doesn’t make it any less exciting! That’s largely thanks to the very capable writing of Scott Snyder and the truly epic pencils of Greg Capullo. Batman is up against some serious pressure from the Gotham P.D. right from the beginning of this issue as issue #26 left off on quite a cliffhanger. If you haven’t been keeping up with Zero Year, you’ve really been missing out on one of the greatest Batman arcs ever. 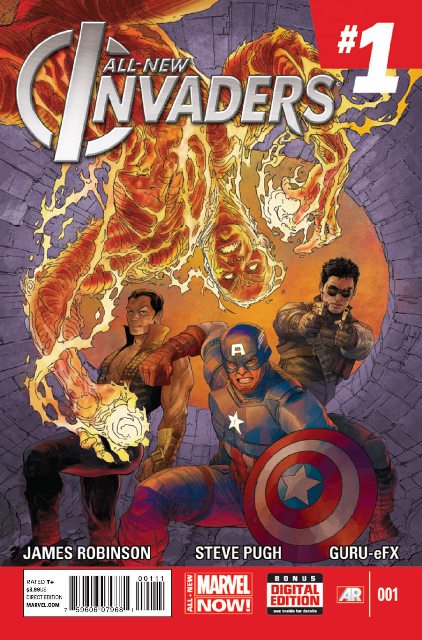 “GODS AND SOLDIERS” PART ONE
Eisner Award winner James Robinson (STARMAN, EARTH 2) returns to MARVEL, uniting with Steve Pugh (ANIMAL MAN, HOTWIRE, GEN-X) to create a unique, modern day take on the INVADERS.
The KREE EMPIRE intends to conquer the universe using a weapon that will grant them an army of NORSE GODS.
It falls to four heroes united by their past—CAPTAIN AMERICA, NAMOR, THE ORIGINAL HUMAN TORCH and the WINTER SOLDIER—who must now face the future and wage war against the Kree to save Earth.

Picked because: James Robinson knows a thing or two about taking classic characters and giving them a fresh take. His Earth 2 run is already being called one of the best single runs of the last 10 years and this could easily become another hit for his already incredible resume’. This classic team had some great stories way back when so it’s great to see someone as capable as Robinson writing them. And pitting them against the Kree while dropping hints that we’re going to get some Thor action, too?!? Sounds like a great time. And if you haven’t seen Steve Pugh art before, you really need to go pick up some recent Animal Man and you’ll see why he got this gig. 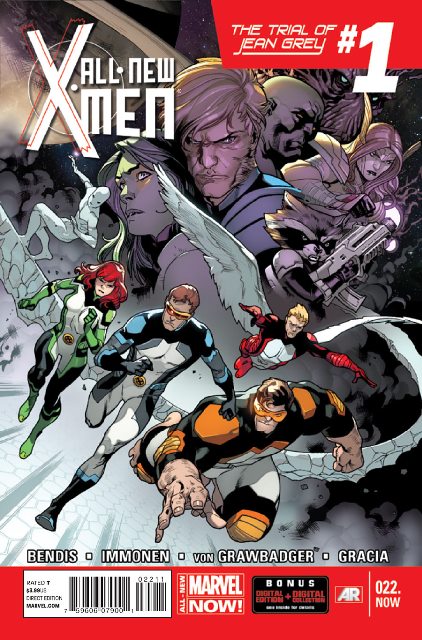 Art and cover by Stuart Immonen

“The Trial of Jean Grey”
The arrival of the original X-Men in the present sent shockwaves through the Marvel Universe, but we’ve only seen the effects on Earth. When alien races learn that Jean Grey, host of the destructive Phoenix Force, is back on earth, they do something about it. Now it’s up to the rest of the All-New X-Men and the Guardians of the Galaxy to save Jean Grey from twisted intergalactic justice! Don’t miss two of Marvel’s biggest franchises crossing over for the first time!

Picked because: This is going to be one for the books (and the puns)! Brian Michael Bendis has done some amazing things with both the X-Men and Guardians of the Galaxy franchises and this will no-doubt be huge. Jean Grey’s past with the Phoenix Force certainly makes plenty of alien races nervous, but can you really put someone on trial for crimes they haven’t committed yet? This could bring about some interesting philosophical questions, too. And given the tension between Jean and Scott Summers lately, there’s bound to be some highly emotional moments, too. If ever there was a good time to jump on, it’s now. 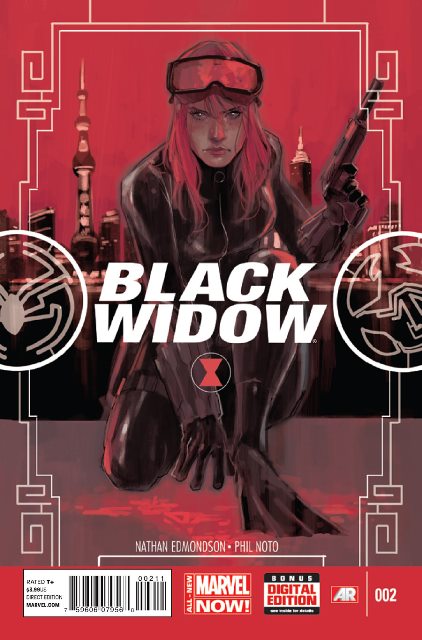 Art and cover by Phil Noto

“Shanghaied”
You’ve seen Black Widow as an Avenger and even an Agent of Shield. But on her own time she searches for atonement for her past as a KGB assassin—in ways of which those teams just wouldn’t approve. From the darkest corners of the Marvel Universe, Nathan Edmonson (Who is Jake Ellis?) and Phil Noto (Thunderbolts, X-23) bring you a new ongoing series as gorgeous and mysterious as Natasha Romanov herself!

Picked because: Issue #1 was an amazing surprise! This title is clearly ready to join Hawkeye as Marvel’s next great solo series. Nathan Edmondson has a great handle on Natasha’s voice and he writes her as a much deeper and more compelling character than just about anybody else in her long history. It’s too early to tell what format this book is adopting from month to month, but it seems to lean toward each issue featuring a new assignment for Black Widow in her ongoing attempts to make up for past sins. There’s some interesting background moments happening to tie all the issues together and it’s likely that’ll be a major plot point going forward. It’s easy enough to jump on with this one, so take the plunge. 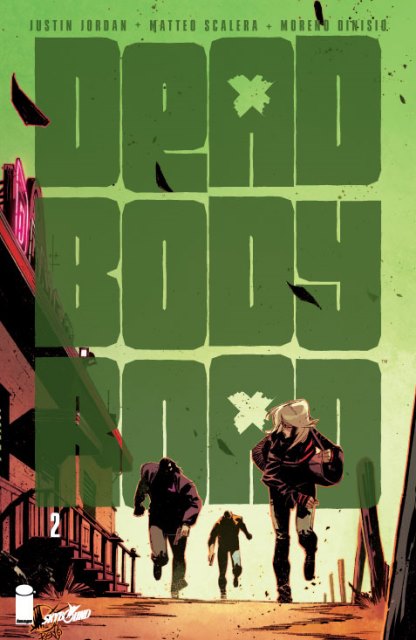 Will a standoff in a diner lead Gage one dead body closer to his revenge? Or is it just a pit stop on the highway to Hell?

Picked because: Equal parts Pulp Fiction, The Punisher and Death Wish, this is another Image title you shouldn’t be missing out on. If you read Justin Jordan’s other creator-owned series, Luthor Strode, you know that a story like this is right in his wheelhouse. Last issue was hugely entertaining and kept things moving at a very brisk pace. This one looks to continue that trend. And who doesn’t love a good, old-fashioned revenge story? 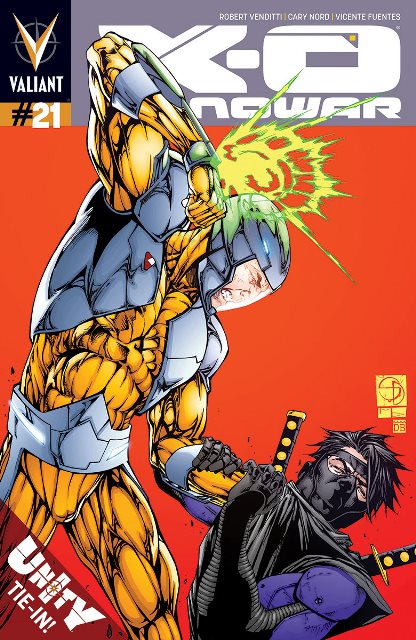 Stripped of the X-O Manowar armor, Aric of Dacia has been imprisoned and interrogated at an off-the-grid black site. But what knowledge could the governments of the world want from a man who has journeyed 1,600 years to the present? A man who liberated an alien planet? A man who once wielded the most powerful weapon in existence? What knowledge could they want, you ask? All of it. And the agents of UNITY will extract every one of Aric of Dacia’s secrets by any means necessary.

Picked because: Wow, things are getting crazier and crazier between this book and Unity! That’s one area Valiant excels over many of its competitors: major payoff after some great buildup. If the suit has a new wearer, the ramifications will be major for anybody caught in the middle. Then there’s the whole question of what happens when Aric ultimately gets it back…You can bet the payoff for that one will be spectacular. This issue might have a bit of exposition, but it could also be a great chance to jump in and get caught up.