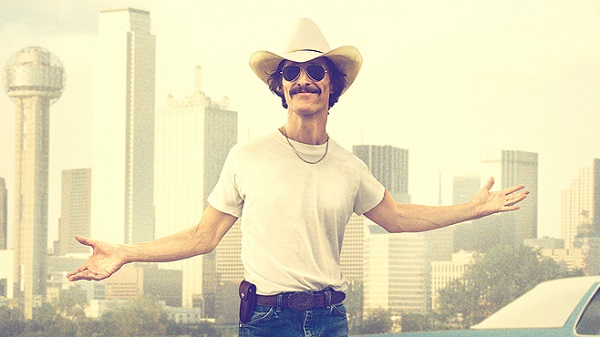 Approaching this film I was so excited to see what the critics had been talking about in regards to Matthew McConaughey’s performance. He has been on a tear in Hollywood this year. I ranked the movie Mud high on my Top 20 list this year for a reason and it was because of McConaughey. Dallas Buyers Club focuses on the battle that Ron Woodroof has with his diagnosis of the HIV virus. As this review is written both Matthew McConaughey (Ron Woodroof) and Jared Leto (Rayon) both won the Golden Globe for best actor and supporting actor respectively for this film and were also nominated for Oscars in both categories. Let’s dive into this depiction of an internal battle between a man and his ego with the external world looking on.

The first thing you will notice from the film is Ron Woodroof’s (McConaughey) appearance. He has transformed his body completely and is deathly skinny. He is full of piss and vinegar and an outlaw to the core. He focuses his life on gambling, rodeos, and women. The film gets off to a quick pace and early on Woodroof is given the diagnosis and it is a reflection of the time. Woodroof’s masculinity is what keeps him whole and at this point in the history of the virus, it was primarily a homosexual disease. So Woodroof gets the news that he has 30 days to get all his affairs in order … he has 30 days to live the rest of his life.

In addition, the movie has significant political ties with the ideology of finding a cure for this deadly disease that was doing some serious damage during this time. Woodroof’s signs and symptoms of the disease are breathtaking and McConaughey lets us live and breath with the anger and torment he is going through during this crisis. His body is the reflection of this deadly virus and McConaughey is almost unrecognizable outside of his usually recognizable voice. Jennifer Garner plays a doctor named Eve. She has a very flat affect in the beginning of the film but you know there is sympathy underneath that dry exterior. That is what this movie is really all about. It is about layers and what we see on the outside. It’s about the way people judge others and how it comes from the internal issues and struggles a person goes through.

There is a scene that truly shows the depth of Woodroof’s character when he prays. We discover it is his internal demons that led him to this place and may be causing his downfall, but his prayer is answered. This is when the movie picks up and starts moving forward and deeper into this 30-day struggle that Woodroof is going through in order to live rather than not die. Woodroof sees his life turn into a violent tailspin due to his addictions, demons and disease. A stroke with death introduces him to the second star in this tale of two lives struggling with disease while trying to find a way to live. Rayon (Jared Leto) completely morphs into this character and takes control of the screen. It is his loving and caring nature that contradicts Woodroof’s outlaw nature. Together they humanize both characters providing the depth that this story needs.

When you watch the trailer for this film, the highlights show Woodroof’s enterprise of helping out others in need with their disease. One of the main catalysts for this piece of the story is in part to Griffin Dunne who plays Dr. Vass. Vass is the “physician” that Woodroof finds in Mexico. He is the man who helps him bring these vitamins and medications into the U.S. populations that can’t afford to get any help for their diseases. Woodroof’s struggles continue to build throughout the film and while his internal disease is under control with this medication, his trials with his main clientele continue to evolve. As stated earlier, Woodroof’s outlaw ways prohibit him from allowing this relationship to build, but as it naturally does, Woodroof grows as a person. It is those relationships that define who Woodroof becomes and how his life will be remembered. This film shows some of the highs, some of the lows, some of the struggles and some of the victories that Ron Woodroof went through in his battle with HIV/AIDS. Matthew McConaughey said it best when he said the movie was not about death but about life.

Dallas Buyers Club takes an informative look at some of the real life struggles that HIV/AIDS patients had during the early stages of the disease. McConaughey, Leto, and Garner all give fantastic performances that should garner them a lot of praise and notoriety during the awards season. This was a moving film that has a multitude of layers that allowed the viewer to become acclimated to the film while allowing the main characters to live and breathe. I won’t spoil my picks for award’s season just yet, but these three did a fantastic job in bringing this true to life outlaw tale to the screens of millions of people throughout the world. I ended up ranking this film number three on my top 20 films of 2013 and it is one that I will watch again in the future.

Thank you for joining me for this review of Dallas Buyers Club… Tragedy, disease, death, and LIFE. Please stay tuned to the Place to Be Nation for more movie reviews and also my look at the nominees for this year’s Academy Awards. If there is a film you’d like to see me review, please let me know. Here is to 2014 and the movies!