One thing we at Place to Be Nation like to celebrate is the subjectivity inherent in entertainment — be it in wrestling, comics, music, television or, indeed, film. With that in mind, ten members of the PTBN staff will be picking the movies of the PTB generation.  In this series, panel members will collect their five favorite films of each year, beginning with the year in which the oldest writer was born — 1976. The only rule given to each contributor was to provide his or her own criteria. Some writers may go with the most artistic films, while others might side with the most iconic blockbusters. We welcome your lists on Facebook and Twitter. Each staff member has submitted a list of five movies from 1977 ranked 1 through 5. A first-place vote is worth five points, a second-place vote worth four points, and so on. Using that point system, we have identified the top 5 movies of 1977.

Our number one film dominated 1977, but that only served to make the race for spots 2-5 a heated race. But before we reveal the top 5, let’s see the movies that received votes, but fell short of making our final list.

The Many Adventures of Winnie the Pooh — 4 points 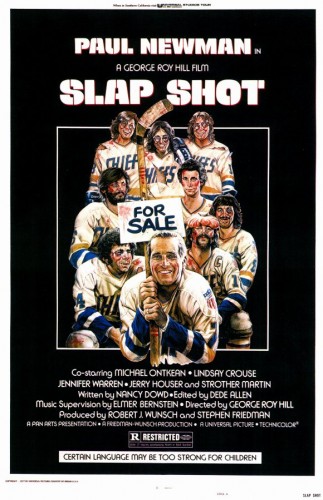 10 points, ranked by 4 of 10 voters, highest ranked by Andrew Riche and Steve Wille at No. 3

Anthony Estrada: What is Slap Shot?  Is it a comedy?  It’s funny, but a lot of the humor comes from the hopelessness of the characters, a group of damaged people attached to a second-rate hockey team in a dying town.  Is it a drama? Two minutes with the Hansens, a trio of adult brothers whose travel suitcases are filled with toy trucks, would disavow you of that notion.  Well, what is it then? Simply put, Slap Shot is a MOVIE, too self-assured and indifferent to expectations to be labeled anything else.

Slap Shot stars Paul Newman as Reggie Dunlop, player-coach of the Charlestown Chiefs.  The Chiefs are reviled by their own fans and on the verge of extinction.  Dunlop’s best days are far behind him and his life is a long-time routine he wearily follows, bemused by the casual disappointment of everything.  When that routine is threatened, Dunlop takes drastic steps to fight for its survival.

This movie demonstrates that Paul Newman was an actor who just happened to also be a movie star.   He dials back 85% of his charisma and creates a character too dynamic to be a loser, but resigned to stay at a level a notch or two above.  He’s George Clooney channeling Norm Macdonald.  You watch the movie simultaneously pitying Dunlop and wishing you could be him.

The movie has a tremendous ensemble of real-seeming characters that are flawed, stupid, desperate and hilarious.  I’m not really a hockey fan but the person who wrote this was.  The scenes are filled with details that ring true and add a sense of realism, which makes the struggles sadder and the comedy funnier.  If you’re a fan of movies and haven’t seen it, I highly recommend checking it out. 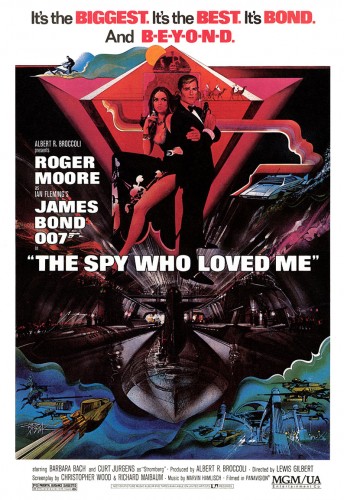 12 points, ranked by 4 of 10 voters, highest ranked by Nick Duke and Russell Sellers at No. 2

Aaron George:  Nobody does it better…

As the 70’s progressed all of mankind was getting used to a Connery-less James Bond. After some fun but less than stellar outings involving voodoo and Dracula, 007’s franchise needed a strong kick on the ass that would hopefully sell us on this new  debonair James Bond. The Spy Who Loved Me was not only a legitimately good Bond movie but pretty great movie by any standards.

Roger Moore finally came into his own as the iconic British spy and it’s in this window where he’s a little removed from the novelty of taking on the role and not so old that he looks like a (literal) sad old clown that he does his best work as Bond. The story is simple by James Bond standards, a bad guy named Stromberg steals a submarine tracking system to trigger a nuclear war and Bond has to stop him and bang a few chicks on the way. Is it formulaic? Sure. Is it a fun little adventure? Absolutely!

Everything just works for me here. The union jack parachute open, the fantastic opening song, the amazing Lotus and the cool locales, Egypt being a personal favorite of mine, make this and easy winner for best Roger Moore Bond film. I’d be remiss if I didn’t mention the debut of Richard Kiel as Jaws, which gives Mr. Bond a truly memorable villain to go up against and gives us all images of a Jaws (Man) vs. Jaws (shark) which would haunt our dream fight dreams for years to come. Jaws was so awesome they brought him back two years later for Moonraker. I really need to watch some more films from 1979 so I don’t have to write about that atrocity.

A cheesy, but fun Bond adventure with some decent acting which doesn’t make you ashamed to be a fan. With the Roger Moore films that’s a huge accomplishment. 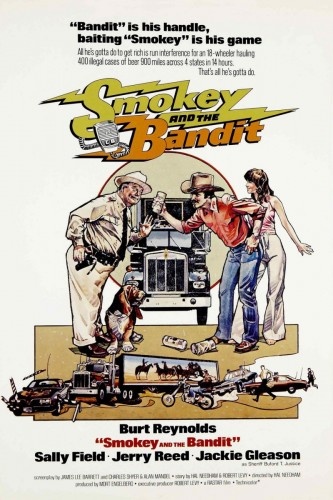 3 (tie). Smokey and the Bandit

Andrew Woltman: There is something inspiring about the rebellious spirit of the 1970’s, and Smokey and the Bandit captures it magnificently. At a time when Coors and Budweiser stuck to their territories like drug cartels, this movie chose to make light of the situation in a high octane comedy set in the south involving a bootlegging adventure between Georgia and Texas.

It obviously isn’t the most engaging plot of the 70’s or even 1977 for that matter, but it had the substance to maintain it’s charm through repeated viewings. The cavalier demeanor of which Burt Reynolds’ Bandit goes about his business for the sheer point of having a good time transferred to the mindset of the viewer, and one could adopt that mannerism and enjoy the movie for what it is. Jackie Gleason’s Sheriff Buford T. Justice had a bumbling demeanor held up solely by his unrelenting grasp on his dignity. Not only did it create a common antagonist for our heroes, it made it easy to understand why the Sheriff was such as hardass. Sally Field joins the ride as the runaway bride Frog, from whom Bandit steals a heart. It adds a new dimension to the film and establishes an interesting clash of the classes scenario in which they compare their lifestyles.

In one of the deepest quotes of the entire movie, Bandit explains the problem with cultural bias as opposed to intelligence: “When you tell somebody somethin’, it depends on what part of the country you’re standin’ in, as opposed to just how dumb you are.”

So in addition to being a race for our protagonists to complete, the film knocks down stereotypical blockades in one smooth interaction. Smokey and the Bandit is an all around hysterical romp with deeper meaning hidden behind it’s ultimate purpose: For the money, for the glory and for the fun….mostly for the money. 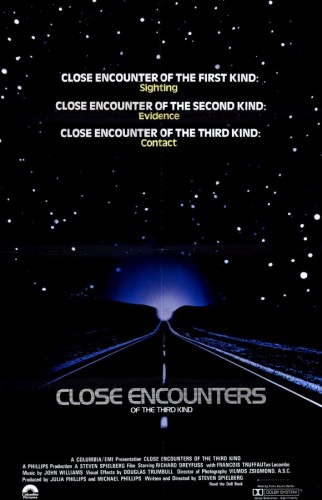 2. Close Encounters of the Third Kind

16 points, ranked by 5 of 10 voters, highest ranked by Aaron George and Andrew Riche at No. 2

Glenn Butler: Close Encounters of the Third Kind is a movie about the sun coming out at night and singing to you. It’s about the grounding forces of daily life and the ways that a singular event can throw all of them out the window. It’s about the realization that your life as it has been is petty and small. It’s about ascending to a mountaintop and meeting celestial beings who come not to maim or dominate, but to communicate, to invite you into their world. It’s about humanity entering a larger community. It’s about the awe one feels at the beginning of a long journey. It’s about secular spiritualism.It’s Steven Spielberg’s first major sci-fi film; you may have heard of a few of his later ones, and we will surely be chronicling some of them as our generational tumble continues ever on in this column. While the direction is confident in what it’s doing, the movie also greatly benefits from Doug Trumbull’s amazing visual effects and Richard Dreyfuss’ performance in the starring role. Dreyfuss has much of the film on his back, and absolutely delivers.Close Encounters also falls squarely within John Williams’ golden period, stretching roughly from 1975 (Jaws) to 1983 (Return of the Jedi), when he scored ten or more major blockbusters among other projects, became a household name, and made writing memorable and massively popular themes look like the easiest thing in the world. While Williams had the idea to incorporate “When You Wish Upon a Star” into the film’s finale early in the writing process, the story goes that he and Spielberg agonizingly tested hundreds of five-note phrases before settling on the now-familiar main theme you may have stuck in your head now. (Sorry.)

Nick Duke: Man, what is there to say about Star Wars that hasn’t been said a million times before by people infinitely more qualified than I? Not much. Suffice it to say that Star Wars is one of, if not THE, most iconic and influential films of all time. It certainly deserved a large share of the credit for bringing the science fiction action genre out of the cult and B movie realm and thrusting those types of films into the forefront of pop culture. Now, I wasn’t alive in 1977 to witness just what a phenomenon the movie was, but Star Wars fever certainly swept the nation and the world that year, and has continued to do so ever since.

But what was it that captured the imagination of the world? It’s hard to pinpoint just one thing because there are so many unforgettable elements of that film. Was it the spectacle of it all? The special effects were truly groundbreaking for 1977 and even on a smaller budget, George Lucas still managed to give us some of the best puppet, miniature and practical effects we’ve ever seen.

Or is it the iconic characters? Luke Skywalker, Leia Organa, Han Solo, Darth Vader…. all household names nearly 40 years later. Throw in the amazing supporting non-human characters such as Chewbacca, C-3PO and R2D2 and you have the elements for a true powerhouse. But to me, of all the characters in that first film, it’s Alec Guinness as Obi-Wan Kenobi that lends the movie its gravitas and its emotional weight. It’s Luke’s story, to be sure, and Vader is the threat that looms large over every scene, but it’s Old Ben that seems to give the movie its spine, so to speak.

I could go on for days about Star Wars and what it means to me, but I’ll leave it at this – If this project is intended to truly identify the movies that have defined a generation, it’s hard to think of one that has done so more than George Lucas’ first trip to a long time ago in a galaxy far, far away….