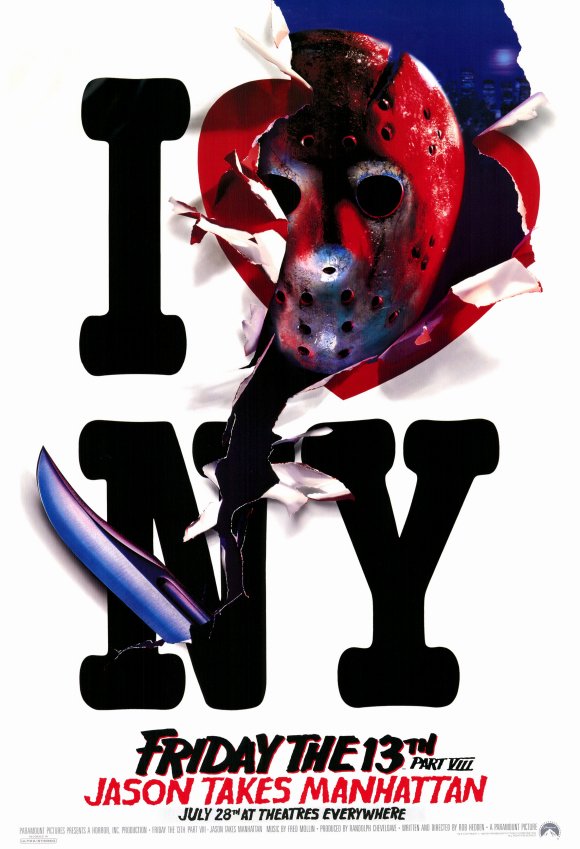 Plot: Jason, raised from the bottom of Crystal Lake, hops aboard a cruise ship full of high school graduates on their way to New York. Slice ‘n dice time.

We’ve just about reached the bottom of the barrel when it comes to the Friday the 13th series. Jason Takes Manhattan, the eighth film in the series, was the last to be produced by Paramount, and rightfully so. I remember being excited for this as a kid and loving it….today it’s a different story, but we’ll get to that in a few minutes.

A year after The New Blood, Jason is back trapped at the bottom of Crystal Lake. A couple riding aboard a houseboat drop anchor and accidentally drag a live electrical cable over Jason’s corpse, bringing him back to life. Jason kills the couple and rides the boat out of Crystal Lake. The next morning, the SS Lazarus is ready to set sail, bound for New York City with a graduating senior class from Lakeview High School on board.

Jason catches a ride onto the Lazarus, just before we meet our lead Rennie, an aspiring writer who’s a terrible swimmer. Over the next few hours, Jason does his work and takes out each teenager one by one, leaving only Rennie, her boyfriend Sean, two chaperones, McCulloch (Rennie’s uncle), Colleen, and Julius alive. The group escapes the ship as it starts to sink and paddles their way to New York.

Arriving at New York, the group of course is stalked by Jason. Julius and Jason fight on a rooftop, with Julius, a boxer, beating Jason back across the roof before letting Jason have a free shot, to which Jason literally punches his head off! The group is attacked by some street thugs, which Jason kills, before Colleen and McCulloch are killed. It’s then we find out that Rennie met Jason when she was a kid. She and her uncle (McCulloch) were at Crystal Lake, and McCulloch pushed her in, trying to teach her how to swim. While she was trying to swim, Jason (still a kid) grabbed her and tried pulling her under. Remember this.

Rennie and Sean are able to get away from Jason, and are pursued through Times Square, a diner, a subway and finally end up going into the sewers which are set to be flooded with toxic waste at midnight. Sean is injured, and Rennie draws Jason off him before severely wounding Jason with a splash of acidic waste. She and Sean climb the ladder as the sewers flood, causing Jason to drift away into the sewer plant – the acid turning him into a normal looking child. The two climb out, ready to start a new life together.

Okay, first let’s tackle the biggest problem the film has: it’s barely set in New York. Back in the day, when Jason takes Manhattan was new, people were confused as to why the film was mostly set on a freaking boat. Today, thanks to DVDs and director commentary, and Wikipedia, we know that the budget kept getting slashed, and soon enough the New York scenes were trimmed down to less then a quarter of the film. I can’t say with all certainty that more scenes in New York would make the film better, but at least it’d be true to the title of the film. Still, Jason does get to New York, and the best scene is Jason scaring off some thugs by lifting his mask up and showing them his face.

The second problem is the timeline. Rennie, our lead, claims she was pulled under the water by Jason when she was a little girl, so that was about a decade ago we could say, since she just graduated high school before the beginning of the film. The problem is, ten years earlier is when Tina from The New Blood was out at Crystal Lake, killing her father. Jason was an adult then, not a child, so there’s no freaking way Rennie could have seen Jason under water, at least, not little kid Jason. Rennie just isn’t old enough for this plot point to work, making an already problematic film even worse. Maybe if she was in her forties….or fifties.

The third problem is just the pacing of the film, as it’s not good. Everything happens so fast, there’s no build up to any of the kills, and the kills themselves, besides Julius, are boring and uninspired. Writer/Director Rob Hedden tried to do a good job, and his commentary proves that he wanted to and had the best of intentions, but with the budget slashed and everything from New York put on the boat, I think the film just didn’t have a chance.

I do have a theory about the film’s plot, and no this isn’t something you’ll find on any commentary or documentary. I think the entire plot is a story Rennie is writing. At the beginning of the film, Rennie was given a pen used by Steven King as a gift, and we’re told she’s trying to be a writer. Well, since the timeline for Rennie seeing Jason as a kid is way off and not possible, you could say that everything that happens when Rennie gets on the boat until the final shot of the film is all a story she’s writing. It’s not unusual for writers to take an established character and put their own spin on it. Plus it explains the mistake in the timeline, how she was able to get over her fear of swimming, and it also explains why toxic waste melted Jason into a normal looking little boy.

Or I could just be wanting to find a way to explain this mess of a film.

Acting: Jensen Daggest as Rennie was easy on the eyes, but she had all the personality of a piece of cardboard.

Scott Reeves did fine as Sean, there really wasn’t much for him to do.

Peter Richman was great as McCulloch, one of those characters you just can’t wait to see get it.

Kane Hodder was fine as Jason Voorhees, I’ve never gotten the hype for the guy though.

Gore Factor: We get a few stabbings, a cut throat, guitar to the face (it’s pretty lame) and the awesome head knock off kill.

Nudity Factor: We get a little side boob but that’s pretty much it.

Overall: Jason Takes Manhattan is not very good. The kills are lame, they spend too much time on the boat, and the major plot points just don’t make sense. However, this is Jason doing what he’s meant to do, slicing and dicing. It’s just a shame the film isn’t that good, but we haven’t hit rock bottom just yet.