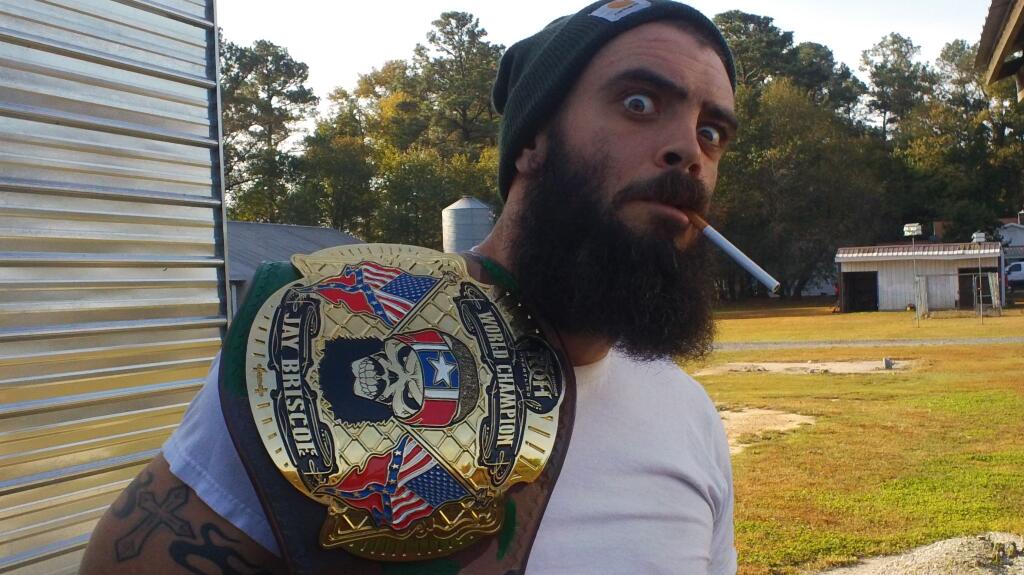 We open this week’s show with a video package that recaps last week’s announcement that Jay Briscoe and Adam Cole will battle in a Ladder War at Supercard of Honor in New Orleans to determine the undisputed ROH World Champion. That was followed by an attack on Briscoe by Cole and Mike Bennett until his brother Mark made the save. After that we hit our opening animation and then head inside the National Guard Armory in Philadelphia where Kevin Kelly and Steve Corino welcome us to the action. We then head right to the ring for our opener.

Steve Wille is getting jiggy with it as ACH’s theme rocks the house for this six man tag team opener. The Decade is out next, color coordinated and popping in pink and black as always. Good to finally see Roddy Strong back in action here after that gruesome neck injury he suffered back in January. Decade refuses to shake hands, which annoys Corino since they crow about respect but act like bullies. KK talks about how many old timers feel the young guys don’t show respect, but that isn’t the case here for guys like Everett. Corino talks about his experience with Dusty Rhodes and Tommy Dreamer when he was coming up through the ranks. Everett out-duels Roddy early on until TD comes in to work Strong over. Roddy turns him into the corner and lands a chop before tagging BJ in. Corino continues to talk about paying your dues as BJ controls TD before Thomas comes back with a flurry of kicks for a near fall. Whitmer dumps TD to the floor and after a quick Decade assault, he is chucked back in the ring. BJ stomps away as we take a break.

When we return, ACH is in the ring but getting worked over as well. He fights his way free out of the corner and tags TD back in, who is refreshed and cleaning house on all three Decade members. TD’s kick is called “Black Magic” by Corino, meaning WCF will get some royalties, so thank you. Things break down in Tuscaloosa as all six men are brawling in the ring, including Everett, who has been camped on the apron for a while. And holy effing shit, he gets some insane hang time on a springboard moonsault to the food onto Jacobs and Whitmer. He then bounces to his feet and springs back in with another fantastic moonsault to Roddy for a near fall! Hache mache! TD flies as well, hitting a somersault senton into Jacobs and Whitmer as well. ACH follows with a dive into them as well. Back inside, Roddy catches Everett with a jumping knee and follows with a backbreaker for the win. The early part of the match was nothing special but those closing two minutes were wild stuff. Everett can fly, baby. The Decade continues to roll.

The mood has gotten sultry as Romantic Touch saunters to the ring, baked in red light and toting a rose. Sex personified, sir. Sex personified. He tops himself by playing rose guitar in step with his music. And now RD Evans enters to some old school big band swing music. When the fuck did he get so awesome? Evans has Veda Scott with him and is joined by a guy in a suit carrying a “40-0” sign. RD gives Corino some notes, which inform us the man’s name is Ramon. Can Touch end the streak? We will see. RD gets a quick school boy off the bell but Touch kicks out and we officially get under way. Touch gets a “snuggle monkey” flip per Corino. This guy. This is my kind of guy. RD wrestles like I imagine Dan McGinn would. Touch gets a bit distracted by Veda, leading to an RD dropkick for a near fall. RD heads up top but comes up empty on a splash as Touch rolled away at the last second. He follows with a pair of back body drops but eats a boot on a charge. Touch shakes that off and runs RD into the corner. After some interesting strutting and swiveling, Touch hits a neckbreaker for two. RD bounces back with a backslide for two but as he gets up, Touch dropkicks him to the floor. He follows that with a somersault senton to the floor. Touch again gets distracted by Veda, who crawls under the ring to hide. Touch follows her, allowing RD to slip inside and win by countout. The streak lives! Hit that music. Bring in Babe Ruth with a cigar! Give me a chick bee-bopping with a navy sailor. Screw you Woody Wilson! 41-0! Ramon already has an updated sign. RD cuts a fun little promo but as he proclaims his manhood, he is interrupted by Silas Young, who runs RD off with his strap. This is like my children fighting. Stop! I need a commercial break.

Roddy Strong is out for commentary during this next matchup. He gloats over the Decade’s win as Page makes his way out. CA is out next and this should be a pretty good match if they take to the air. Strong talks about respect and his take on both men as they start to lock up. They trade some basic holds early as Strong talks about the long road to respect he has taken during his ROH career. Cedric lands the first big blow with a dropkick, which garners him a near fall. KK talks about the comparisons between Cedric and Roddy, which he doesn’t view as an insult, but Roddy is insulted by CA’s attitude. Page gets back dropped to the floor as Corino defends CA and says he has never seen him be disrespectful at all. Page slips back in and starts to mount a bit of an offensive and is able to slug CA to the floor. Page fetches him and brings him back inside but CA comes back with a big kick to the face off a top rope springboard. Roddy wants to see better men in this business and he doesn’t care if the Decade is portrayed as bullies. The new guys need to be taught and learn how to earn their stripes. Page snaps off a nice powerslam for a two count. CA hits a modified flatliner for a near fall. Page bails to the floor to regroup, dodges a CA baseball slide and then hits a moonsault off the apron. He slides back in and Roddy implores Page to take the count out win, but Page doesn’t listen and goes out after CA. He dumps CA back in and heads up top as Roddy continues to coach him. CA dodges a cross body and follows with a big charging dropkick. CA hits Roddy’s Lumbar Check backbreaker for the win, clearly pissing Strong off. Roddy hops in the apron, but CA blows him off and walks away. Roddy chats with Page and then walks off. That was a decent match but Roddy, KK and Corino did all of the heavy lifting in pushing the Decade agenda forward quite a bit.

We are back from break and it is main event time. Bennett, Cole and Maria are out first and…say it with me…hache mache, Maria! Time to man up as well, as Jay and Marc are out next. This will be a good primer for Ladder War, just a couple of weeks away at this point. Jay and Bennett kick things off as KK wonders if Maria was behind this new union. The Briscoes work over Bennett as Corino talks about his new-found friendship with Mark, to the point that he even cooked him some chili. Bennett avoids a charge and crunches Mark with a dropkick. He tags in Cole who walks right into Redneck Kung Fu. The Briscoes trade-off, maintaining control, which pisses off Maria, who claims they are cheating. She also calls Bennett and Cole “my guys”. Cole finally slips away and slides to the floor to catch a great. The Briscoes follow him out and all four men brawl around ringside for a moment. Cole and Mark end up back inside, where Cole hits an enziguri and Bennett cracks Mark from the floor leading to a near fall. The heels continue to control as we catch our final break.

When we come back, Mark is still trapped in the corner and getting worked over. Bennett tags in and slips up, allowing Mark to make the tag. Jay peppers Bennett with some right hands as Cole backs off down the ring steps. Jay lands a dropkick but can’t catch Cole. That allows Bennett to gather himself and crack Jay with a right hand. Jay fights that off and comes back with a near fall. Jay hits a falcon arrow followed by Froggy Bow from Mark. Mark heads back outside to beat on Cole as Jay keeps the heat on Bennett. Bennett fights his way out of a DVD and hits a side effect for a two count. Cole tags in and finally gets some alone time with Jay. Bennett helps out and both men hammer away as Jay valiantly tries to fight his way out of trouble. Mark saves his brother with a springboard dropkick that wipes out both men. He chucks Bennett to the floor and then wipes him out with a flying blockbuster off the apron. Mark heads back inside where Cole is trapped. The Briscoes clubber away at him in the corner before planting him with a double shoulderblock. They load Cole up for the Doomsday Device but as Mark heads to the apron, Bennett flies out of nowhere with a balls out spear, sending both Mark and himself crashing through a table to the floor. That was pretty awesome. Inside, Cole hits a superkick to the back of Jay’s head but can only get a two count. Cole heads to the middle rope and goes for the Destroyer, but Jay back drops out of it. Jay also blocks the Florida Key but eats a boot as he charges into the corner. Jay reverses out of another Key attempt and hammers Cole with a big boot and clothesline. He follows with the Jay Driller for the clean win. Well, that certainly builds some Briscoe momentum for Super Card of Honor. Good match overall with a red-hot final few moments starting with that super spear.

We hit SCOH in just two weeks and the card is taking shape. Jay Briscoe now owns two pinfall victories on the champion but can he climb the ladder when it will matter the most? We will find out very soon. Until next week, take care and always respect the code!

Be sure to check out The Kevin Kelly Show, exclusive to Place to Be Nation!