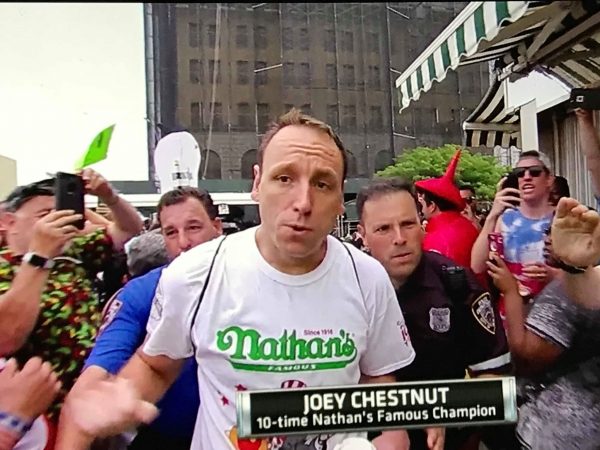 Happy (sort of) Independence Day to all! As we discuss in this space every year, yours truly is a man of traditions and there is no tradition greater than crushing hot dogs all day and night during a summer cookout, meaning the Nathan’s Famous Hot Dog Eating Contest is as peak tradition as it gets. And I am here for you to review this epic event each and every year! As usual, we are coming to you live (via tape for me now, natch) from the home of the contest and the original Nathan’s Famous in Brooklyn on Coney Island. And this year, ESPN has moved the full replay of this event to ESPN+, so I had to sign up for the free trial of that grift just to do this. You’re welcome.

We open up our coverage with one of our usual epic intro packages, this one putting some focus on the greatest carnival barker of all time: George FUCKING Shea. I say it every year, but if you are to watch this thing for one reason, it should be for George, who we see high above the masses on a pulpit pitching his pitch for this contest of kings. That is followed by a look back at the key players and their history with the contest and their path to today. That includes the infamous 2015 battle where Matthew Stonie knocked off the GOAT Joey Chestnut, handing him his only loss over the past 11 years. And last year, Chestnut broke his own record with 72 dogs taken down. This recap tries hard to make us think Stonie and Carmen Cincotti have a shot today but time will tell.

Adam Amin and Rich Shea officially welcome us into Coney Island and narrate us through the arrival of the competitors. Amin is new to the show, replacing our old friend Paul Page. I assume Pauly must be in a hospital somewhere because I can’t imagine how that guy would miss this event. Shea compares Chestnut to other sports legends and the titles they have won. We also check out the historical hot dogs eaten chart for the career of Chestnut. 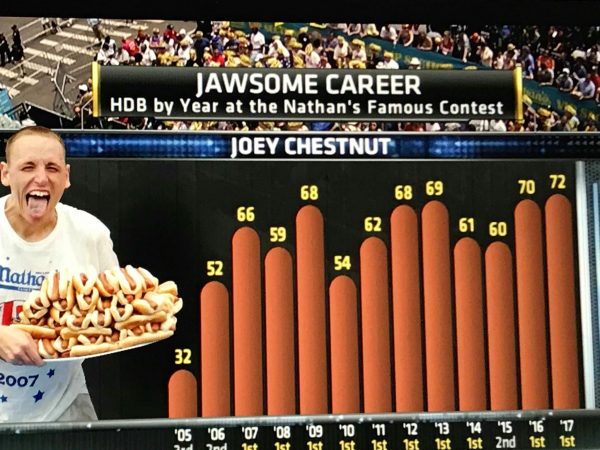 We then visit with our intrepid sideline reporter Melanie Collins, who is back for year #4. And just in case you forgot what we are working with there, here you go… 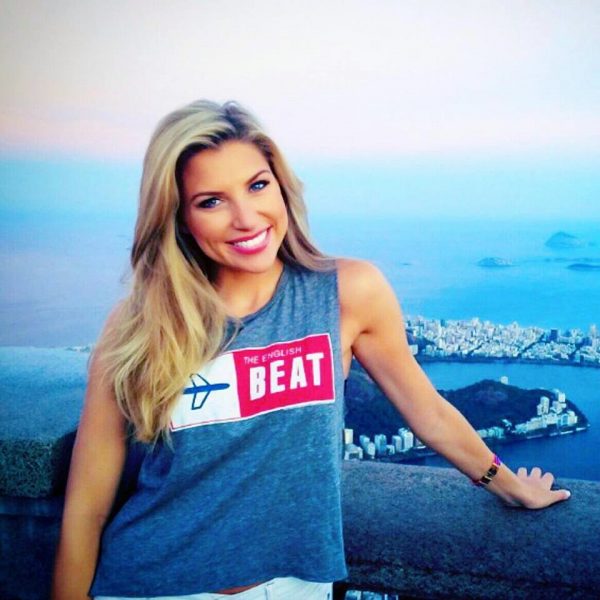 Hi, Mel. Melanie chats with Chestnut, who is fired up and says he won’t be lazy today and is interested if Cincotti can break 70. Melanie breaks down the conditions for us and their possible effect on Joey. What a fucking pro she is and she has really taken to this gig. And while we talk about Matt Stonie’s YouTube success and dramatic drop off here in Brooklyn over the past two years, let’s just pay tribute to our favorite Nathan’s Famous sideline reporter of all time. The First Lady of Salty, Cobbled Together Meatlike Product Consumption Contests, the gorgeous Renee Herlocker. 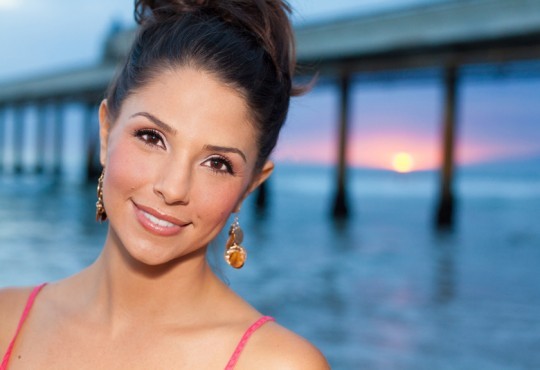 Renee is gone. I’m pouring beer out for my shorty who ain’t here. Give it up for my shorty. Renee. We get more talk pushing the cases of Cincotti and others, as Adam and Rich think this is the deepest field we have seen in quite some time. I will believe it when I see it, boys. 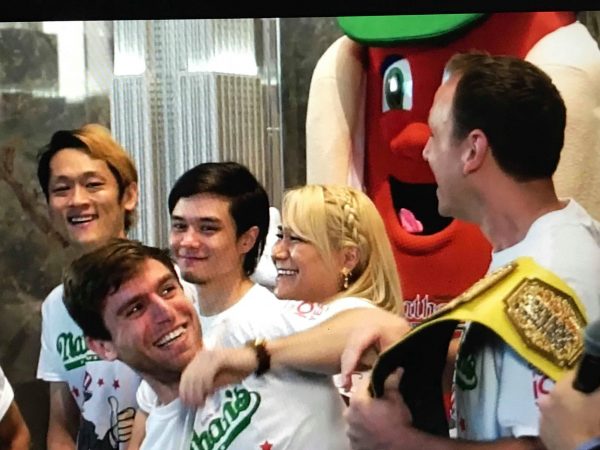 After a break, we check out some clips from promotional work the competitors have done and it is really clear that Cincotti is getting the Jesus Push as the top contender yet again this year. It is a lot of pressure and the biggest story of the day may be whether or not he can hold up. That is followed up by a look hyping the women’s competition, focusing on our reigning champ Miki Sudo, who has won the last four Mustard Belts after dethroning Sonia Thomas. We transition right into brief highlights of the women’s battle, which featured very little drama. Sudo won it again, outpacing second place by nine dogs but also matching her second lowest total of her run. The heat certainly played a role there, I am sure.

Congrats, Miki! Hopefully they can find a legit challenger to her soon before she just keeps piling up these straps. We do find out that her family was in attendance for the first time today, so that is cool. Mel chats with Miki, who says she knew she had a strong lead and just kept pace enough to win. She joins Chestnut and Kobayashi as the only five time champions here in Brooklyn.

Melanie returns and walks us through a video profile on Cincotti, the local hero done well. Of course, fittingly he was born on the Fourth of July and has risen the ranks of competitive eating as the years have ticked along. We get words from his family, including his mom, who wasn’t happy that she funded his college tuition and then went into competitive hot dog eating, but she seems proud nonetheless. Today on his 25th birthday, he goes for the gold.

Upon returning from a break, we get a plug for American Cornhole League action and then get an in depth package on Mr. Chestnut himself, including talk about all his head-to-head wars with Kobayashi. That is immediately followed by a hype piece on Japanese import Max Suzuki, a YouTube sensation that prefers Ramen noodles as his gluttonous delicacy of choice. He qualified for this contest by knocking down 42 dogs in the Las Vegas qualifier and credits Kobayashi as his inspiration and hero.

And after a break it is now time for the competitors to enter… and as always, I implore you to watch this part for yourselves because no man can do the Immortal George Shea justice as he does his thing. The field: 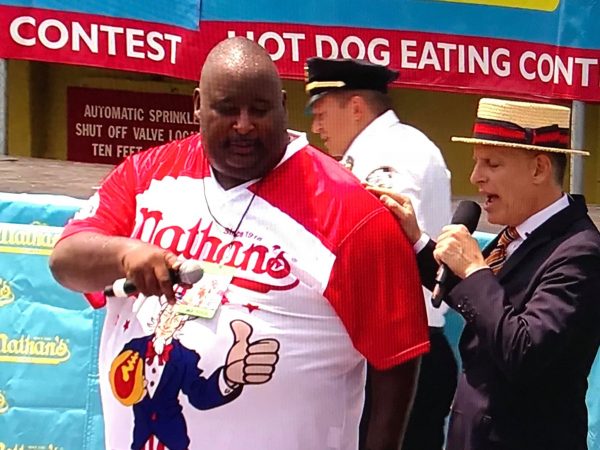 This was all worth watching just for the Booker & Shea freestyle battle. What a fucking moment. We also get a neat scroll of all the records Chestnut holds. A true legend of space and time. And after this next break, the 101st Nathan’s Contest will kick off!

We return with one last hype video including a Badlands Booker rap and then it is officially time to light this candle. The clock winds up and away we go! Chestnut is burying processed meat off the bat as we learn that Joey has his own dedicated camera on ESPN3 like the fucking icon he is. Everyone is chugging along at a solid pace to start as usual, with Chestnut setting the pace as usual. The announcers discuss how relaxed Stonie was this week and that could come into play and toss out a potential comparison of Nick Foles beating Tom Brady. Stonie, Suzuki and Cincotti have all passed Chestnut but that is short lived, natch. Stonie is on fire here as we tick two minutes in. Some of these dudes have earbuds in, which is pretty cool. They should do a segment on what they prefer to listen to. Stonie and Chestnut are neck and neck now, and this is a nice bounce back for Matty after a weak showing a year ago.

As we duck below seven minutes, Cincotti is struggling, perhaps crumbling under all the hype and birthday expectations. Joey is at 27, averaging about 7.75 per minute. He has now opened up a six dog lead over Stonie, who is fading quickly. We are closing in on five minutes and this may already be over as Chestnut is leading Esper by seven with Stonie and Cincotti in sniffing distance. Halfway through, Chestnut is at 37 and Melanie tells us he is behind the pace he figured he needed to break the record. We get some insight on the humidity as Chestnut now leads by 11. Amin is rambling about Liv Tyler as this thing is all but over, leaving the record as the only point of question. Shea talks about Chestnut’s training and prep this week, which is more interesting than the contest. Chestnut is at 48 with three minutes to go so he will need to really pump some meat down to take this record.

Stonie and Cincotti oscillate for second but are trailing by deep double digits now. Shea wonders how many eaters can hit 50 and reminds us that those beyond the winner also get prize money, so finishing high means more cash. We are under two minutes and Joey is sitting in the mid-50s, he has some legit work to do to get the record, but we can never count him out. Amin and Shea are all over the place as we hit the final minute. Chestnut is at 58 and leading by 19 with 60 seconds to go. “The esophagus of a champion, the stomach of a warlord” says Shea, and who can argue with him. Joey is destroying the field but is only at 62 with 15 seconds left so the record looks safe for this year. Time bleeds out and Chestnut locks up his 11th title with a 19 dog win. What a master of his craft. Cincotti finished second at least, so nice rally there. 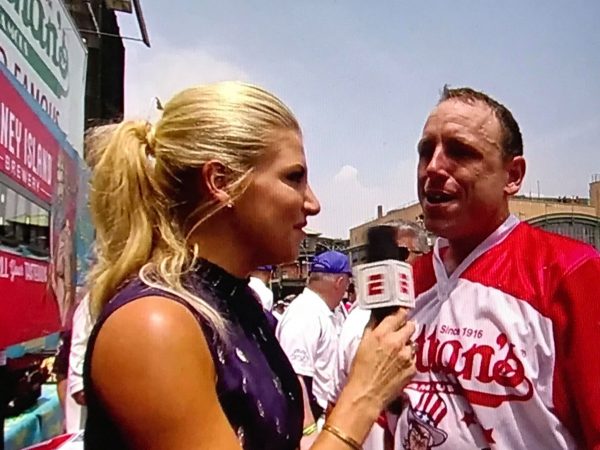 We wrap things up with Mel chatting with Chestnut, who talks about battling the humidity and says the judges were a mess and couldn’t keep track but he fought through. We also now find out that Chestnut actually wrecked 74 hot dogs, which would be the record. Looks like that unofficial tracker was way off then. Chestnut celebrates while Amin and Shea wrap us up and we are out.

This was a lot of fun as always thanks to George Shea and the production but we need some legit threats to both belts at some point. Seeing Chestnut smash records is fun, but without a real foe the contests are anticlimactic. And we didn’t even get to enjoy the buzz of the record falling this year because of the judge and tracker issues. All that said, this is still one of my favorite events of the year and I am already prepping for 2019! All hail Joseph Chestnut, the once and future king of processed meats!