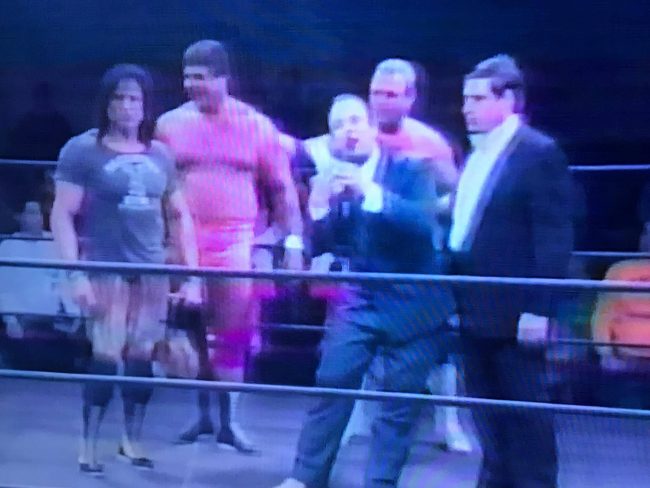 Paul E’s shocking arrival and perfect promo. It was succinct, to the point and explained everything perfectly without dragging along. Great, and historic, moment. I will also give an honorable mention to Terry Funk at the Double Cross Ranch. I enjoyed him talking to the horse’s ass and calling it Eddie Gilbert while explaining the chain match rules.

Lots of good work across the board this week but Paul E. Dangerously stole the show. His appearance was a big surprise and then he crushed his promo and set up the top stable in the territory all in one quick segment.

Paul E. Dangerously’s arrival totally caught me off guard and it was really well executed. The crowd went nuts too, chanting his name as Gilbert and Muraco won the match. His promo was tremendous, as you would expect. His digs on the Pennsylvania residents were pretty funny and he immediately puts the territory on notice. They did a hell of a job of building up an elite heel squadron on top of ECW in less than a month.

Glen Osbourne’s hair is a snapshot of the early 90s for sure and it looks like he is using Pantene; Paul E.’s cell phone has a permanent spot in this category; Tony Stetson’s tights combined with Larry Winters’ mullet is like an immediate time warp to 1993

Jay Sulli’s yellow bowtie and cummerbund combo is a sight to behold; Terry Funk at the ranch was tremendous;  “The Madman From the Badlands” gets me every time; Pretty cool that we get to see Gilbert and Muraco team up right out of the gate here; We have our first glimpse of ECW Hat Guy, sans giant hat; Wonderful putting over Murano’s Asiatic Spike brings me right back to 1986; Whoa, Paul E! The crowd loved it; Good promo from Hunter Q. Robbins, reminding Winters and Stetson that this is their last chance at the gold after blowing it a week ago with a DQ; Jay Sulli continues to not give a shit which Super D is which and Stevie trolling him on it is good stuff; The tag title match is one of the best bouts we have seen so far, Winters & Stetson make for a fun little pure babyface team; Sal Bellomo was fun too, we have had lots of good talking segments here and it’s making for a quick moving show; Sal is getting a big ECW Title match too, this is a loaded episode; I am still having a hard time adjusting to Sandman as a fiery underdog babyface; I like that they keep pushing Sal as insane but it was kind of a lame finish to the Title match; Rebel worked a pretty tidy squash; Good hype for next week with Winters & Stetson putting their hair up for a title rematch and Hunter signing immediately without realizing that he would be cuffed to Tommy Cairo during the match; Nice little grudge match to bring us right into the end what has been an eventful episode