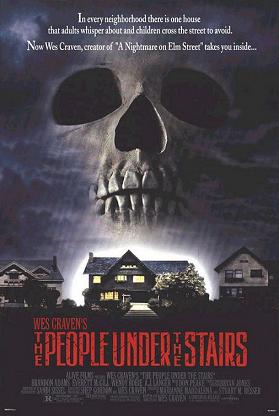 Plot:  A young boy helps his sister’s boyfriend break into the house of their money grabbing landlord and steal from them. However, he becomes trapped inside their large house and discovers the secret of the “children” that the insane landlords have been “rearing” under the stairs.

Review: You know a prayer? Say it!

If you had cable TV, specifically if you had HBO in the early 90’s, then chances are you caught The People Under the Stairs ad nauseam. Still, we’ve got a decent little flick here from Wes Craven who moved away from supernatural films like A Nightmare on Elm Street and Serpent and the Rainbow (which we will get to).

The story sees thirteen year old Poindexter Williams, better known in the film as Fool, whose mother is dying of cancer and whose family is about to be evicted from their apartment. Fool wants to help, and teams up with his sister’s con man boyfriend to break into their landlord’s house and rob them.

The landlords, who are a brother/sister combo (although known throughout the film as mommy and daddy) own a number of slums and businesses all over the city, and are incredibly rich to boot. It’s also rumored that they have kidnapped children from the area and locking them away in their basement when they are bad.

Fool and the two others attempt to break into his extremely large Victorian-era house. While they are all successful, only Fool is able to stay alive with the other two getting killed by vicious guard dogs and other traps. It’s not long after that Fool finds himself trapped in the house that has deadly traps. Also the Daddy is running around in a gimp costume with a shot-gun trying to kill him.

While in the house, Fool befriends a girl who is the “daughter” of the couple and a boy who lives in the walls constantly running from Mommy and Daddy. It’s then viewers find out that the people under the stairs are kids that have been kidnapped by the sick couple and then locked away for going against their rules and wishes. Fool is able to escape and comes back with help, ultimately getting the money he needs to save his mom and send the Daddy/Mother team sky-high!

I said in the beginning that this film was a different offering from Craven because it moves away from supernatural horror and it really shows here. The film cuts a great pace and keeps the viewer moving from point to point without slowing down enough to become boring. The film takes place over the course of a day and a half so there’s really no time to slow down.

The film having a kid as the hero was different and as a kid I enjoyed the film for it. Today, I still like that this little smart ass is giving these people trouble and taking it to them. The brother/sister combo are as heinous as any other serial killers out there. It’s freaky watching them interact with each other and the things that happen in this house only add to the craziness of it all.

In a way, Fool redeems himself by coming back to the house after he escapes to save Alice and the people locked under the stairs. It’s important to remember why he comes back this time since he is doing it for the right reasons and not the wrong. I like this redeeming aspect of the story plus it gives viewers a good reason to root for Fool.

Wes Craven proved he didn’t need a man with razors for fingers or electric chair jumping killers to craft a creepy and engaging story. There’s little bits that stick out here with the allusion that these people are cannibals and their house is set up like the game Mouse Trap. You really don’t know what to expect next!

Acting:  Brandon Adams (Fool) did a great job here. He was the leading man and carried the picture quite nicely. You may also remember Brandon from Moonwalker and The Sandlot.

Everett McGill and Wendy Robie played the Mommy/Daddy duo perfectly. You bought into their characters and they felt extremely real. Without their strong performances, the film would have been flat.

A.J. Langer as Alice did a fine job. She was scared when she needed to be and finally got tough at the end with perfect timing.

We also get a young Ving Rhames doing what he does best… hamming it up!

Gore Factor: There’s not a lot of red here but what we do get is gross.  A few skinned bodies in the basemen, a dog getting stabbed, a tongue hacked off and the Man must have been eating human ribs for dinner. I’m just saying, that rack of ribs was not the standard store-bought kind.

Overall: The People Under the Stairs is one of those movies you can throw on just about any time of the year and enjoy. It’s neat seeing all the traps in the house and fun watching Fool stick it to the sick bastards.