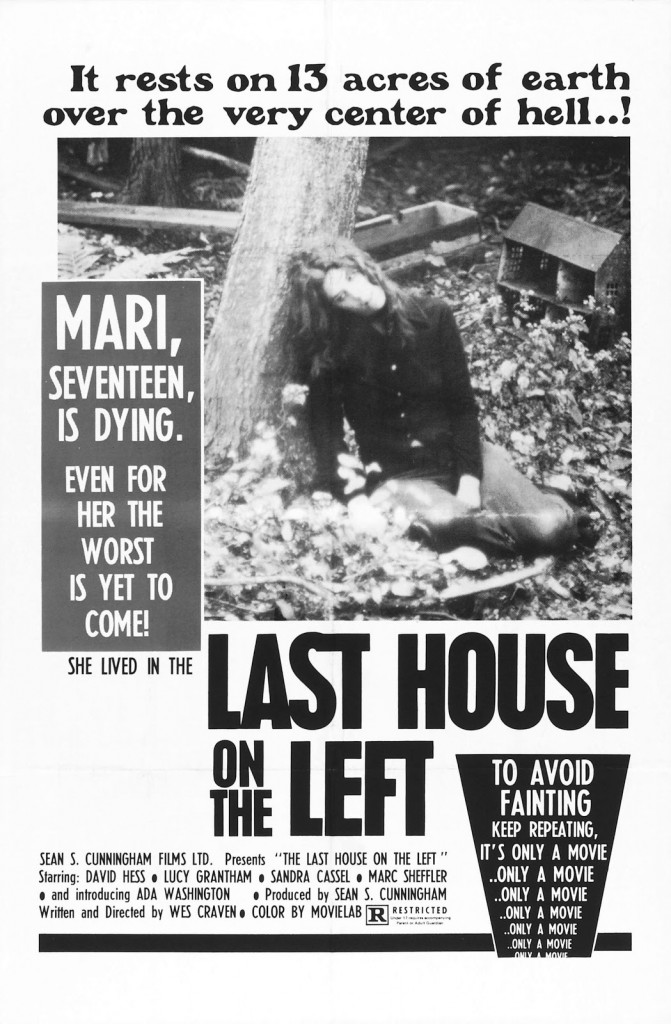 Plot: A pair of teenage girls are headed to a rock concert for one’s birthday. While trying to score marijuana in the city, the girls are kidnapped by a gang of psychotic convicts.

Let’s not get ahead of ourselves though. Last House on the Left centers around a teenager named Mari, yes, that’s Mary with an I instead of a Y. Mari is looking forward to going with her friend Phyllis to a concert to celebrate her seventeenth birthday. Her parents are of course worried about letting Mari go see the concert and are also concerned with her friendship with Phyllis. Ultimately her parents let her go because she’s a good kid, so you know, they trust her.

In the city, Mari and Phyllis try to score some weed from a random guy on the street, who just happens to be the son of escaped convict Krug Stillo. Soon enough the girls find themselves held captive by Krug and his gang, who consist of Krug’s girlfriend Sadie and friend Fred. Krug is a rapist and serial killer, Sadie is plain crazy, and Fred (known as Weasel) is a child molester and murderer, ’cause they needed to add extra oomph to the characters background. Junior is just a dumbass kid that doesn’t know any better.

For the next day or so, Krug and his gang beat, torture and rape Mari and Phyllis, before taking them out to the country and eventually killing both of them. They even go as far as to disembowel Phyllis, and leave Mari for dead. After leaving the area Krug and his gang end up at Mari’s house, posing as motorists who need a place to stay for the night. Soon after Mari’s parents find her as she dies, and realize Krug is to blame, and take their revenge.

The story has a good premise; parents lose their child at the hands of a psycho and take revenge on him and his gang. However it’s the execution that’s handled all wrong. Of course, way back in the 70’s this was some brutal stuff, but not even the time period can excuse the piss poor film making by Wes Craven.

I will give Craven credit for doing something that didn’t involve ghosts and monsters, which were popular horror devices way back when, but I can’t overlook the horrible writing and bad pace the film has. The dialogue is at times choppy and lacks polish, all of the characters sound like they’re just setting up the next scene rather than sounding organic. To add to this issue, scenes often end with little or no explanation.

One example of poor editing is the ending, with Krug and Mari’s father ready to fight, we get some close ups and then suddenly it’s over. What the hell happened?! There are so many jumps from scene to scene it’s often hard to understand what the hell is going on, which kills the pacing of the film and doesn’t allow the viewer time to care about what’s happening.

Another issue I have with the film is that, we’re supposed to take it seriously, and okay I get the writing lacks polish and there’s some downright head scratching dialogue, but the music they chose to use in the film just ruins everything. While the whole kidnapping is going on, a song is playing and the lyrics are talking about Krug and what they’re doing in a joking manner. How in the hell am I supposed to take this seriously when I’m hearing random banjo music, slide whistles, and some happy guy singing about Krug and his gang?

The censors of course tore the film apart, like I’ve said before there was some brutal stuff in here for its time. It’s hard to find a complete uncut version of the film as well, even when the DVD says it’s unrated and uncut chances are it’s not. I can’t say that having more gore would have helped the film, because even during moments in the film where there is nothing gory of the sort the editing is downright horrible.

Acting: Sandra Peabody does a fine job as Mari Collingwood. She’s sweet and innocent and cute, it’s a shame she’s only in the first portion of the film.

I liked Lucy Grantham’s work as Phyllis. She’s cute and much stronger than Mari’s character. She wasn’t backing down from Krug and it’s a shame she had to meet her end.

David Hess did a great job as Krug. Out of his gang, he was the only one I bought as the character. The rest were just too cartoonish.

Nudity Factor: We do get some full frontal stuff but it’s uncomfortable to look at in this context.

Overall: The Last House on the Left brought audiences a new kind of horror film, where people were the monsters and went over the top with the ways they killed people. However due to poor camera work, sloppy editing and a soundtrack that kills the emotion of the film, it’s hard to suggest anyone watch this. This may be the one time I suggest a remake over the original, and thankfully Craven would redeem himself with A Nightmare on Elm Street.