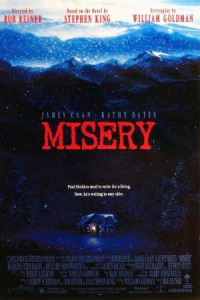 Plot: Novelist Paul Sheldon crashes his car on a snowy Colorado road. He is found by Annie Wilkes, the “Number one fan” of Paul’s heroine Misery Chastaine. Annie is also somewhat unstable, and Paul finds himself crippled, drugged and at her mercy.

Review: I’m your number one fan.

I remember seeing Misery in the theater with my mom way back in 1990 when I was eight. It was scary stuff let me tell you, and even today it still holds up as a tightly written thriller that cuts into the horror genre.

I have to be up front right away, I will not be comparing the movie to the novel in any way. I’ve never read the novel, and I have no intentions on reading the novel (King’s work is too dry for my taste). So those that have read the book, don’t expect comparisons here. I’m simply reviewing the movie we were given nothing more.

The plot of Misery is an easy one, which I think makes for the best horror movies. Paul Sheldon (Caan) is novelist who writes trashy love books (think soap operas) feather a character named Misery Chastain. His current goal is to write something more series, and after finishing his work in Colorado he heads back to Los Angeles. However Paul gets in a terrible car accident and is saved by Annie Wilkes, his number one fan. Soon enough Paul realizes that Annie is bat shit insane and he may be trapped in her house as her patient forever.

As the film moves on we learn more about Annie and her past, that she may have been involved with a number of infants dying at local hospitals where she worked at as a nurse. This of course is why she’s able to take car of Paul, she knows her way around the medicine cabinet. I can remember my mom (a nurse herself) commenting throughout the film about how Annie was handling the nursing side of everything. Annie’s crude ways of treating Paul’s injuries are punishments in their own right really.

Paul to his credit tries to get crafty and escape, but ultimately he’s stuck without the use of his legs, adding to the suspense of the film. There’s also the local Sheriff who won’t give up his search for Paul, but in the end Paul’s survival is up to himself and Annie. The final fight scene between Paul and Annie feels violent and real, and it’s great. Annie is a great villain.

I think Misery works on a number of levels, depending on what you do in life. It easily connects with anyone that’s ever been hurt and is at the mercy of another person to help them, which is just about everyone at some point in their life. Being hurt and having to depend on someone can make you feel completely helpless, and we feel that throughout the film with Paul.

Another way the movie connects to people are those that have fans, regardless of what you do. Fans that take their obsession to another creepy level are represented through Annie, who starts out meaning well but ultimately changes for the worse. I’m certain there’s a number of famous people who watched this movie and instantly connected with the idea of having someone stalk them. Hell, you don’t need to be famous to have that happen.

I’ve never been a Rob Reiner fan, I don’t hate anything he’s done, but he’s never been a director that I go “great it’s a Rob Reiner film”. With Misery however, Rob has done a fantastic job pulling in the suspense and horror of the situation. It’s not easy to take a Stephen King novel and put it onto film, but Rob does a great job. He dropped a lot of the gore from the book and in its place brought equally as nasty events.

My only qualms with the film is the musical score. It feels generic, like it’s the last thing they worried about then making the film. I would have also liked to see the Sheriff Buster character get more screen time, as he’s only in a few scenes and easily dispatched.

Acting: Jimmy Caan does a great job as expected. I think people forget how great of an actor James Caan is. He brings it here as Paul Sheldon, and brings the audience into his room and his bed and we feel just as trapped as his character does.

Kathy Bates, ah the great Kathy Bates, scared the shit out of me as a kid in this one. Today, she’s still creepy as Annie Wilkes. I don’t believe there’s anyone else that could have played this role. Kathy is perfect here. Kathy became the first woman to win an Oscar for Best Actress in a horror/thriller for her role as Annie Wilkes, she deserved it.

Richard Farnsworth had the small role of Sheriff Buster. Farnsworth had a great career during his time with us, and his work here is great even though it’s limited.

Gore Factor: There’s no real gore here. We don’t need it though, as the scene were Annie breaks Paul’s ankles was more than enough to carry the hour and a half run time. I don’t believe there’s a person alive that can watch that scene and not react. With this, we didn’t need anything else nasty in the film.

Nudity Factor: Jimmy Caan shows off his pearly whites….that’s it.

Overall: Misery is still scary today, period. Rob, Caan and Bates all did a fantastic job bringing the audience into Paul’s room and bed and trapping them there at the mercy of Annie. The film is full of suspense, horror and little tidbits of comedy just to keep it moving along. This is easily on of the best horror film’s of the 90’s.