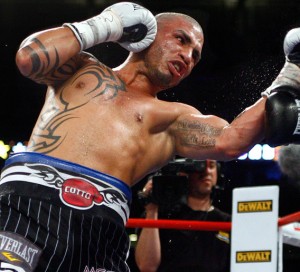 We boxing freaks are blessed with a fantastic run of fights on the major networks through the rest of the year. Up this Saturday is a split site triple header on HBO. From Moscow, lineal heavyweight champion Vladimir Klitschko takes on undefeated Alexander Povetkin on Povetkin’s home turf. Then live from Orlando, junior middleweight prospect Terence Crawford takes on Andrey Kilmov in a 10 round bout followed by the great Puerto Rican warrior Miguel Cotto squaring off against Connecticut’s own Delvin Rodriguez in a 12 round affair. As is always the case, the Cowboy is  here with the breakdown for you.

Before we get to the preview, let’s recap last Saturday’s controversial HBO card. In the co-feature, Montreal’s hard hitting Adonis Stevenson absolutely took apart Tavoris Cloud in a light heavyweight scrap. Stevenson used a deadly combination of lateral movement and concussing power shots to force Cloud’s corner to stop the fight after the 7th round. This was an extremely impressive performance from Stevenson who was looking to establish himself as “the man” at light heavyweight following his brutal one punch knockout of lineal champion Chad Dawson.  Mission accomplished! Cloud, a viable contender in the division, was reduced to following “Superman” around the ring and taking a massive amount of punishment. The final bell had barely sounded when fight freaks everywhere were calling for a bout between Stevenson and Russian knockout artist Sergey Kovalev. That fight promises to be a barnburner, but it looks like the promoters will let it marinate for at least one more fight. Word is that Kovalev will be fighting on the undercard of Stevenson’s next title defense.

In the main event, Julio Cesar Chavez Jr. took a highly debatable unanimous decision over the game Brian Vera. As I discussed in last week’s preview, Chavez had all sorts of problems making weight and had to forfeit a percentage of his purse to get Vera in the ring. The fight was contested at a limit of 173 pounds (it was originally contracted at 162), and Chavez looked like he weighed at least 190 on fight night. Regardless, Vera pushed the larger Chavez back for the whole fight and outlanded him 176-125 in total punches.  Chavez, when he punched, was clearly landing the harder shots as he wobbled Vera on a couple of separate occasions. Vera never went down, though, and appeared to win enough rounds to do no worse than a draw. This is boxing and, unfortunately, the “name” fighter seems to get every benefit of the doubt with the judges far too often. That was certainly the case here as Chavez won by scores of 96-94, 97-93, and an unconscionable 98-92. The pro-Chavez crowd lustily booed the decision which tells you all you need to know. Quite simply, boxing needs to do something to fix this. Instead of talking about an entertaining, back and forth scrap; all the news around this contest revolves around the poor judging.  With the ridiculous draw turned in by C.J. Ross for Mayweather/Canelo still fresh in everyone’s mind, boxing can’t afford to have this judging incompetence continue to rear its ugly head. It appears that Chavez and HBO are going to do the right thing here as they are already working with Vera’s promoter on a rematch.

Let’s get to the preview and hope that these guys don’t leave things in the judges hands.

Klitschko is, quite simply, the most dominant champion in boxing. He is undefeated since losing to Lamon Brewster by 5th round TKO in 2004 and has barely lost a round over that nine year span. He uses his height and reach more effectively than anyone in the division keeping his foes on the end of his telephone pole jab. Once he finds the range with the jab, he begins dropping straight rights behind it and that usually takes care of things. He has mastered this style and so dominated the competition that we very rarely get to see his famously fragile chin tested. He will look to do more of the same against the smaller Povetkin.

Povetkin, on paper, looks to be Klitschko’s most formidable challenger in some time. He carries a glossy 28-0 record into the contest with 18 knockouts. He, like Klitschko, is an Olympic gold medalist. He is a tough inside fighter who likes to punch in volume when he is at his best.  His belt winning effort against Ruslan Chagaev is his signature win to date. In that fight he wore Chagaev down and outworked him in the later rounds to take a unanimous decision. Against Klitschko, his only hope at victory is to find a way to fight from Klitschko’s chest. Staying outside and trying to box with the giant Ukrainian will get him knocked cold. If he can keep the fight on the inside he is the superior fighter as Klitschko’s inside game consists of holding on for dear life until the referee breaks the fighters. He will have to use head movement and jab his way in and try to land something big, hoping that Vladimir’s chin is still as suspect as it was ten years ago.

Unfortunately for Povetkin, I don’t see that happening. I think Klitschko puts in a textbook performance and lands at will on the rugged Russian from the outside. Povetkin is tough and I think he goes the distance, but even the judges won’t be able to screw this one up.

The last time we saw Cotto he was dropping a unanimous decision to future Canelo challenger, Austin Trout. Trout is a natural junior middleweight and a very slick southpaw. Many people thought that Cotto should not have taken that fight in the first place and they proved to be right. Trout didn’t inflict a lot of damage on the proud Puerto Rican but certainly did enough to win rounds and take the decision. Cotto is as proud as they come and he’s back to take another run at the belt starting with this contest against Rodriguez. Cotto is the more naturally gifted of the two fighters and has forgotten more about boxing than Rodriguez knows. He will look to work behind his underrated jab and set up his power shots.  Rodriguez should be there to be hit and Cotto will be more than happy to oblige. Cotto is at his best when he is working the body.  It would serve him well to go there early and often against the underdog.

Rodriguez is a good, not great, fighter. He is generally in crowd pleasing fights as he doesn’t mind eating some shots to land his own. In his only step up to this level, he also dropped a unanimous decision to Trout. To win this fight, Rodriguez will have to set a fast pace and try to drag Cotto into a battle of wills. Cotto has been known to fade late in fights and Rodriguez has shown he has plenty of heart, particularly in his bloody first fight with Pawel Wolak.

Unless Cotto has faded even more than he showed in the Trout fight, I see him taking this one. He is simply better than Rodriguez in every facet of the game.  As with Povetkin, Rodriguez is tough and I don’t believe that Cotto will score the knockout.  I do see him cruising to a relatively easy unanimous decision in a fun, action fight.

This should be another great weekend of fights in a month full of them. Be sure to tune in. I’ll provide a recap next week and will be live tweeting the fights on Saturday night (@KatieRoger). Remember to check back to PTBN where the Cowboy has the lowdown on the all the major boxing action for you. Enjoy!