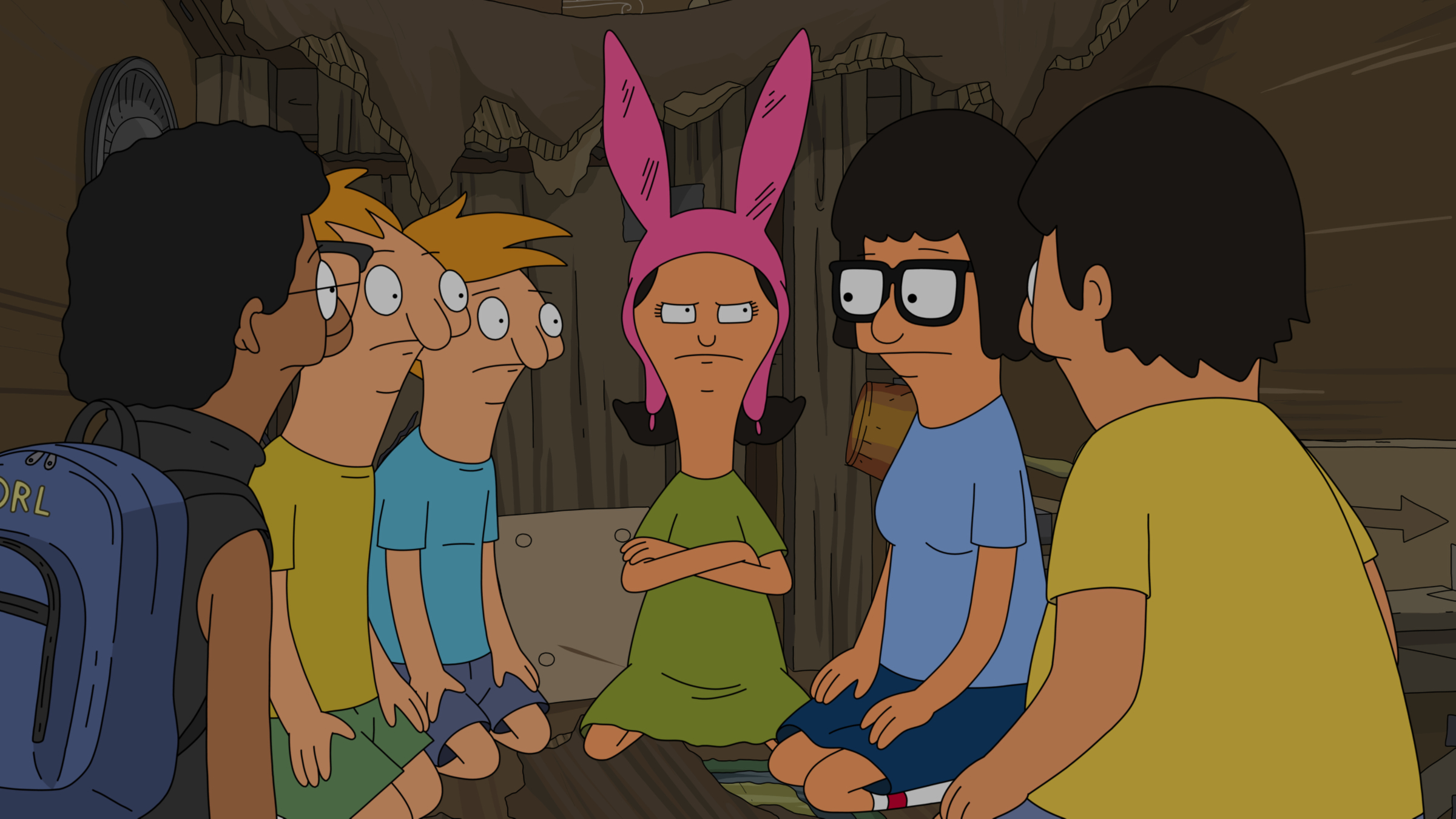 In last week’s review, I spent a lot of time talking about the advantages of animated series over live-action. This week brings to mind one that I had failed to mention: better guest stars. Voice acting cuts out a lot of the drudgery (costume, make-up, etc.) of an on-camera role and lets the performer focus on being funny, so it’s no surprise that they seem more inclined to say yes to making a guest appearance in animated form. And from the writers’ perspective, putting an over-qualified actor into a smallish role can take the comedy to a new level. It’s a win-win proposition that Bob’s Burgers put to use in Sunday’s Halloween-themed episode, “Fort Night”. Guest appearances by Sarah and Laura Silverman, Molly Shannon, and Aziz Ansari helped raise the bar on what could have otherwise been a mediocre episode.

Unlike the other Halloween episodes from Fox’s animation lineup, this week’s Bob’s Burgers featured no supernatural shenanigans, and the holiday was used mainly as a plot device: when a group of kids get trapped in a cardboard fort on Halloween, the fact that they are missing out on trick-or-treating makes the situation far more desperate. (The B story, with Bob and Linda growing resentful of being stuck with making the kids’ group costume, could have been set on any day).
It’s a pretty familiar set-up to force a group of characters into close proximity and let the humor develop from there, but it doesn’t work without good comedic chemistry. The main cast has that part handled, but this is where the guest stars really shine. Aziz Ansari demonstrates some great line delivery as the claustrophobic weirdo, and Molly Shannon lends a genuine creepiness to Louise’s stalker/tormentor. (Sarah and Laura Silverman are mostly unrecognizable as the Pesto twins, but those characters always make me laugh). All that talent behind the microphone lets the writers do some great dialog-based comedy, and that’s what sets this show apart. All in all, it was a solid, if unspectacular, episode that made me appreciate good voice work.

“OK, you really don’t need to take your pants off.” “I wish you were right.” 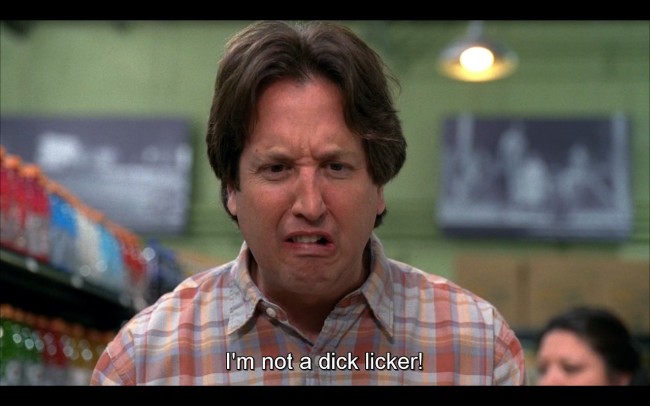 Stevie Janowski has always been my favorite supporting character on Eastbound & Down, and when you take into account that he’s competing with Ashley Schaeffer, that’s really saying something. Between his fawning devotion and propensity for getting into humiliating situations, Stevie works as a great counterpoint to Kenny Powers’ brash overconfidence and supposed self-reliance. I always find myself anxiously awaiting his first appearance in a new season, and this year’s debut did not disappoint. Watching Stevie get belittled by his own children (“Don’t call me dicklicker! Daddy doesn’t lick dicks!”) is something I won’t soon forget.

As usual, Stevie rejoins the story just when Kenny needs him the most. After dramatically rejecting an ordinary life last week, Kenny needs to find a way back to the top, and decides to ask his former teammate Guy Young for help getting back in the game. For reasons that aren’t totally clear, Guy offers him a guest spot on his sports-talk show; Kenny doesn’t question his motives, so who am I to do so? His first appearance on Sports Sesh (that name is awful, but the show is frighteningly believable) is a disaster, with Kenny getting intimidated by the cameras and bullied by fellow panelist Dontel Benjamin.  After the show, Guy lets him know that the only reason he gave Kenny a shot was because he needed someone to stand up to Benjamin, and that he’s got just one more chance to prove himself. Stevie, having seen his best friend humiliated on national television, returns to help Kenny get ready for his next appearance (with the aid of a training montage, naturally). But it’s not until Kenny gets a surprise vote of confidence from his wife April that he returns to his ass-kicking ways.

It’s a genuine, heartwarming moment, which is pretty out of character for the series. The whole episode, in fact, feels like it could have been lifted from a cheesy 80s sitcom: Kenny finds a job that’s perfect for him, overcomes some low-stakes obstacles with the support of his family and friends – they even have Simple Minds playing over the ending credits.  Not that I’m complaining, of course.  There’s plenty of humor to be found in 80s sitcom parody, and it’s refreshing to see Eastbound & Down do something a little lighter and unexpected. Plus, I’m sure all these good feelings will make the inevitable downturn that much better.

(One last thing I’d like to mention: No one throws a fit like Danny McBride, and this week featured some of his best work, particularly the casual dropping of Stevie’s chandelier).

Favorite Line:
“I don’t want to do that anymore! The days of Kenny Powers turnin’ out lesbians are fuckin’ behind him!”