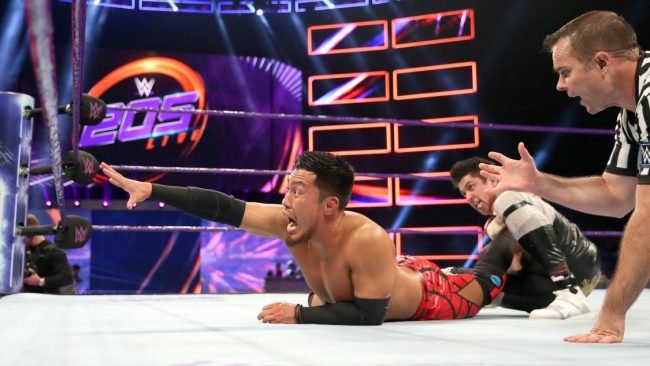 Your hosts are Vic Joseph and Corey Graves. Joseph is apparently the new commentator for 205 Live. He was the former announcer of the House of Hardcore promotion, where he went by his birth name, Vic Travagliante.

We start off the show in the locker room as Titus O’Neill approaches Akira Tozawa. Titus says that despite not officially being a member of the Titus Brand, he got him VIP treatment last night and tonight he pulled some strings to get him a match against TJP. Titus then says Akira could be the next “Kobe Bryant….of Japan” and look out for his best interest as it will be raining yen when he signs on the dotted line. Akira is not amused but Titus insists he can help him become the next Cruiserweight Champion. Titus then does Akira’s chant and ends with yelling “cha-ching!”

Tonight, Austin Aries will address his future on 205 Live.

We are shown clips from last night’s segment on RAW where Cedric Alexander tells both Noam Dar and Alicia Fox he is done with them as Dar was face-timing with Fox in one of the worst segments of the year. If that was supposed to get you into 205 Live, it failed.

Cedric starts off by working the arm. Daivari switches to a side headlock then they end in a stalemate after a reversal sequence. Daivari cheap shots Cedric after a break in the corner but Cedric comes back with a headscissors and a dropkick. Cedric lands on the apron then heads up top but Daivari cuts him off and he splats on the mat after his face hit the turnbuckle. Daivari covers for two then starts attacking the back and neck. He gets two with a jumping neckbreaker then whips Cedric into the corner. Daivari cuts off a comeback with a high knee as that gets two. Daivari works a chinlock on the mat now but Cedric rams Daivari breaks free. Cedric escapes from a sleeper then drills Daivari with a back elbow smash and follows with a handspring enziguiri for a two count. Cedric then hits a springboard clothesline as we see Dar come out with his phone as he is once again face-timing Fox, who we see on the screen. Cedric knocks Dar right back with a basement dropkick then kicks out of a small package and hits Daivari with the Lumbar Check for the win (6:53) **1/2. After the match, we still hear and see Fox screaming for Dar. However, Cedric sees the cellphone on the mat and picks it up and pretends she cannot hear her as she calls him a loser. Cedric then hangs up and gets some cheers as Dar is pissed.

Thoughts: The action was solid. However, the stuff with Dar & Fox was just brutal. Having Fox on Facetime is just the worst and something that does not want to make people watch or become interested in the person she’s feuding with. The Dar & Fox pairing has more than run its course and needs to end ASAP. Its an albatross around the neck of 205 Live.

Austin Aries heads out to the ring. He gets some cheers then the crowd chants his name. Aries puts over the city of New Orleans but says he thought this moment might be different as he was expecting to be here as the new WWE Cruiserweight Champion. Aries says he will not cry about it or say he made Neville tap out outside of the ring and will admit he did not get the job done. Aries says you still have to get up and keep going but folks want to know about his future. Aries says that after months of wrestling TJP and Neville, he has some neck and knee issues and is currently not medically cleared to wrestle. However, Tony Nese comes out to interrupt. Nese calls out Aries for not knowing what is future holds then says he will help him out by suggesting he get out of the ring and sit in a seat behind the guardrail to watch him wrestle. He then tells Aries to save whatever dignity he has left by fading into the past as the future is in front of him. Aries says the last time they wrestled he made him tap out then puts over his physique and wants to ask another fitness question and that is what exercise did he learn to finally “grow a set.” Nese takes off his vest and says he does not have time for him or his jokes but Jack Gallagher comes out. Gallagher says Nese is in New Orleans, a place known for having fun. He then says there is always a time for jokes before telling Nese he’s the biggest joke of all for thinking he can be the replacement for Aries. Nese tries to attack Gallagher but misses then gets whacked with the umbrella as Nese bails. Gallagher bumps his umbrella against Aries’ banana to end the segment. I guess Aries will be off of 205 Live for a little bit. We also set up a Nese vs. Gallagher match for next week. Nese tried on the mic and while he wasnt terrible, it still wasnt all that good. Plus, he loses just about every match he wrestles so no one takes him seriously.

TJP is walking backstage and runs into Rich Swann, who congratulates him for taking Neville to his limits last week. Swann says they are both gunning for an opportunity to once again become Cruiserweight Champion. He then switches gears and tells TJP he almost believed in him again last week and calls him out for trying to take shortcuts over the past few weeks. and last week both the WWE and himself were believing in him again. Swann then tells TJP if he wants to walk around with a chip on his shoulders that’s cool but TJ Perkins would go out and handle business the right way. TJP yells at Swann to get his hand off of his shoulder then heads to the ring. I have no idea where they are now going with the TJP character at the moment. I don’t think another face run is going to work with him, as he is a better heel, but at the same time the heel side of 205 Live is extremely weak behind Neville. A future Swann vs. TJP match appears in the works.

We got a mock political attack ad as Drew Gulak calls out Mustafa Ali for being selfish and taking unnecessary risks. Gulak then tells Ali to keep both feet on the ground and calls for us fans to ask or a better 205 Live. Those two will be facing off next week. The ad was mildly amusing but nothing we haven’t seen before.

Next week, we will get Jack Gallagher vs. Tony Nese.

The crowd chants along with Tozawa to start. TJP breaks cleanly in the corner then Tozawa grabs a chinlock. They end in a stalemate after a fast-paced reversal sequence then Tozawa knocks TJP down and gets two with a senton as Titus is shown watching on a monitor backstage. TJP eats boot on a charge but is able to dropkick Tozawa in midair. TJP hits a slam then follows with a slingshot senton for a two count as the announcers want to know who is the real TJP, who is now stretching out Tozawa. TJP grabs a chinlock as the crowd rallies behind Tozawa. TJP dabs after hitting a springboard forearm smash then stomps on Tozawa’s hand. He gets two with a back suplex then works a modified death lock while kicking Tozawa in the face. TJP then uses a butterfly lock and switches to a chinlock when Tozawa nearly escaped. Tozawa comes back with a hurricarana then knocks TJP off of the apron with a running forearm before flying out with a tope. Back inside, Tozawa gets two with a running kick then sets him up for a top rope move but TJP pops up and cuts him off. They fight up top where Tozawa shoves TJP off but comes down and gets caught with a chicken wing gutbuster for a two count. Both men start laying into each other until Tozawa drills TJP with an elbow smash. Tozawa charges but TJP takes him down with a knee bar. Tozawa reverses and gets two with a cradle but TJP comes back with a spin kick. Tozawa escapes then kicks TJP and follows with a Saito suplex before heading up top where he hits a senton for the win (11:16) ***1/2.

Thoughts: Really good match. I thought these two had awesome chemistry together and the match they wrestled reminded me of TJP in EVOLVE, where he had a really good run prior to signing with the WWE. I’d seek this match out.

After the match, we see Titus dancing and celebrating backstage. Neville interrupts and tells Titus he is setting up his supposed client for failure as Tozawa is not even close to the Neville Level. Titus then tells Neville that Tozawa just beat his former associate and is on his way to being the future of 205 Live as Neville does not look pleased at all.

Final Thoughts: Overall, this show was decent. The main event was very good and they are setting up some new feuds too. The Dar & Fox stuff needs to end and I would prefer more focus on the actual cruiserweights and in-ring product but this was a much better offering than last week’s show at least. Still, the future of 205 Live appears dim as they keep adding other non-cruiserweights to the shows, which is not a good sign.