In between rounds of DotA 2 and Diablo III: Reaper of Souls, I decided that my fill my “other” gaming time with games that would not occupy a significant amount of time. I have already started Zombi U twice, but I keep putting it down because of poor timing; it is a game that I can’t play while the kids are up, and by the time I get them in bed, I’m either winding down myself or end up on DotA 2 again. By the time I pick it up again, I have forgotten the controls and have to do the introduction mission and retrieve the croquet bat. I then quit again because I do not want to commit to something that I really cannot.

Looking on my backlog, I tried to figure out which I could do first. I’m still in the middle of Mark of the Ninja, but it’s a game that’s so good, I’m milking it for all it has and I don’t EVER want it to be over because I love ninja! I have a strong urge to play Donkey Kong Country Tropical Freeze, but I heard it’s on the same tier of New Super Mario Bros Wii U, so I want to wait until I’ve played Rayman Origins and Rayman Legends, with the latter being on PC; I want to play it with my kids, so I’d have to move the PC from the bedroom to the living room to display on the big screen, a major inconvenience and a reason why a steam machine would be nice. I have tried in home streaming by hooking up my laptop to my living room TV via HDMI, but have run into issues concerning framerates or lack of sound.

So I chose some games whose time commitment would not be excessive. I first played through Gone Home, and my thoughts on it can be found here.  Then I played through Papers, Please. 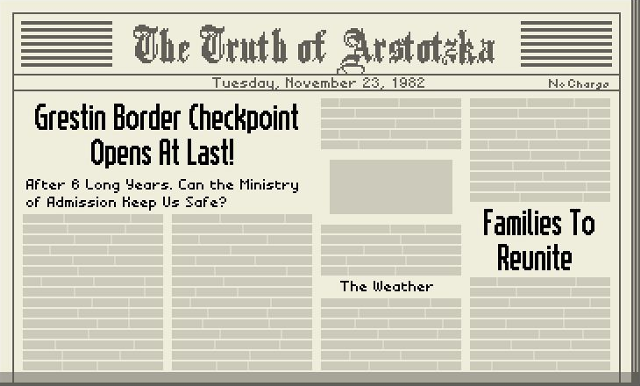 Papers, Please is the kind of game that I would have never purchased had I not noticed some Indie game hype during the Steam Winter sale of 2013.  It was cheap enough such that I did not think the risk to be too great and was rumored to have some political spark to it, so I thought I’d give it a try.

I do not regret my purchase. Although it gives the impression that it was designed as a merely a mobile game that narrowly exceeds the technical capabilities of an iOS/Android interface, Papers, Please is engaging enough such that it lacks the kind of depth that requires several weeks’ investment, but in its brevity will stimulate the mind. The premise is that you play as an immigration inspector for the fictional Arstotzka that is clearly a satire of the USSR in the 1980’s, and your job is to process individuals passing through the country’s borders by evaluating their credentials such as passports, ID cards, and other variable official documents for the admission or rejection of those with legitimate or invalid records. If this sounds tedious, then mission accomplished. One of the unintentionally intentional features of Papers, Please is the game resembling a desk job similar. There were several times during my play sessions that I found processing dull and uninteresting, and through fatigue would miss subtle discrepancies such as a boarder crosser being a couple inches too tall, or the month/day combination for a birthdate being reversed, and would permit individuals who should have been rejected. (I would almost never reject those who should have been approved).

That’s just the basic premise of the game. However, the juicy fruit of Papers, Please is found in how you will become aware of the fact that you are trying to find more ways to deny entry into Arstotzka than permit people, as if you had a personal stake in reducing the number of eligible entrants. Behold the the metagame of Papers, Please, where you are bombarded with multifaceted incentives and deterrents for accepting or rejecting those who want to cross the border. From the onset, you are told that you earn $5 for every individual processed, and a single workday last from 6 AM to 6PM, but those hours pass by like hours in The Sims (one hour in-game is one minute real-time), and so the day is actually pretty short. Every day, bills for food, rent, and heat are deducted from the day’s salary. Neglecting to pay for food or heat will cause one of your family members to become sick and they could die should you continue to fail in providing for them (failure to pay rent straight up ends the game; you are jailed until your family can pay your debts. Glory to Arstotzka!).

I found myself on my second playthrough—after failing in three “game days” to be expeditious enough in my dealings to profit and therefore keep up with the bills—alternating between not paying for heat or not paying for food so that I could save up money in case of a poor performance day. My improvement in processing speed helped me to reach later stages of the game that is only thirty-one “game days” where my days would be interrupted by acts of terrorism at the boarder. Shootings and suicide bombers remind the gamer that the setting is a post-war climate where Arstotzka has recently annexed part of neighboring Kolechia, and some remaining factions displeased with result.

You may find yourself engulfed by the atmospheric experience of Papers, Please, but the fact remains that you still have a family to feed amongst all of this chaos. If a terrorist attacks your checkpoint, your day abruptly ends even if you have only made about $20 for the day. The upkeep cold, starving family at home (which you must keep alive lest you get a game over for shaming Arstotzka by being a failed citizen. Glory to Arstotzka!)  will test your ethics and morality. The first few days of your job presents you with your first empathetic trial, as a couple tries to pass through but only one of them has legitimate documents. If you are good at your job, then by the time they arrive, you may not have used up your two warning citations before your pay is docked and gracefully let them slide. Or maybe you are a straight arrow who performs your job as instructed by your superiors, no questions asked. Or you believe that the $5 you will not receive is more important than the unity of strangers who are married. Or you think they are lying and will tell you anything to get through. Or you are just a big meanie and thrive in making others suffer.

All of that introspection just from a scenario on game day two or three!  Throughout your playthrough(s—there are twenty different endings to the game and you may find yourself on the wrong end of many) you will encounter sex workers (or are they slaves???) who want you to deny their pimp access even though he has valid credentials (denial of valid individuals will earn you a citation), lovers of your bosses and co-workers, athletes, fathers seeking vengeance in pursuit of unpunished rapists, and criminals who will bribe you to gain passage. By far the most heartbreaking scenario I experienced fell between game days when apparently, my niece became homeless due to the incarceration of my sister. I thought that after a day, I would have enough money to adopt her as she was cost prohibitive at the time I was prompted—after all I had been offered a more expensive apartment several times throughout the game—but the next day, she had disappeared never to be seen again. As a father IRL, I was devastated, and this feeling was accompanied by the realization of how much power was in my hands to fulfill or crush dreams, including my own. After all, I always try to seriously role play my first time through the game, so many of my choices impacted me as if I really were a boarder inspector. Only in the subsequent playthroughs did I treat Papers, Please like a video game and would reset days and make choices to unlock the endings I wanted.

As terrorist activity increases, so do Arstotzka’s suspicions concerning those possibly collaborating with hostile parties such as the mysterious EZIC. Arstotzka’s own citizens become suspects, including you, and the tension becomes palatable enough to the point where some questionable characters that you may have befriended by not detaining them will recognize the feces hitting the fan and will recompense by offering you possibilities for escape. With death presiding as the penalty for treason and shame as the penalty unscrupulousness, Papers, Please scrutinizes your loyalty to country, yourself, and your fellow man from the moment you begin the game.