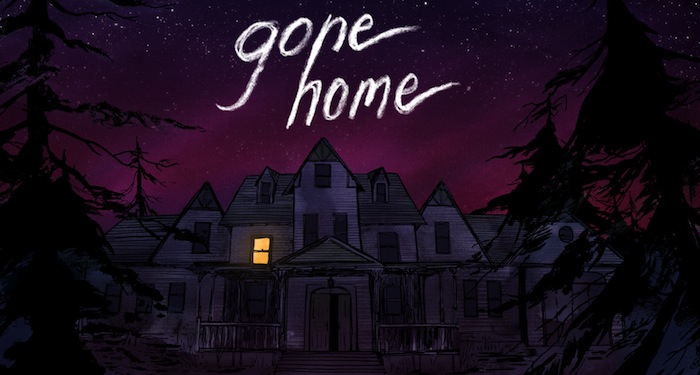 SPOILER WARNING for those unfamiliar with Backloggery Beatdown. These are not so much reviews as they apotheoses of my passion that is gaming. Gone Home hosts a narrative that readers might want to experience for themselves at least once, so I do this as a courtesy.

My first attempt at playing Gone Home was foiled by a BSOD (Blue Screen). During that play session, I went straight upstairs, to Sam’s room, to Terry and Jan’s room, to Kate’s room, to the sitting/sewing room, down the secret passage behind the parents’ closet to the office area, found the photo of Lonnie in the hallway drawer, and discovered the gentleman’s magazines belonging to Terry in the library.

It was only during the second playthrough that I unlocked Sam’s locker and found her skin mags. The fact that they are both longing to be attracted to the same gender shrewdly links the two, and makes one wonder if Sam acquired her magazines from her father’s collection. Yet despite this commonality, they become alienated from each other as the daughter’s parents–as one can infer from the recordings in the latter parts of the game–remain in denial of her sexuality.

Let me get a couple of things out of the way. There is already plenty of writing concerning this game spanning from its unprecedented merits to the accusations that Gone Home is not a game at all. The latter is a ridiculously pedantic. Gone Home is a game in the tradition of the Point-and-Click Adventure, a discovery-driven genre supporting basic controls for exploration, except that it is in 3D. Before The Sims rocked the world of (casual) PC gaming, Myst was the industry’s top-selling game—a Point-and-Click game. In other words, the critics out there who denounce Gone Home as anything but a game need to conduct some rudimentary research before polluting the internet with their nonsense.

The foremost discussed topic concerning this game but secondly ordered in this address involves Sam’s lesbianism. From a gaming history standpoint, Gone Home is unprecedented with its central focus concentrating on the queer, and there will be plenty of rallying cries concerning sexual diversity behind it. The way that this “big reveal” plays out in the narrative depends upon gamer engagement. As I said, upon my first attempt at this game, I went up to Sam’s room where I found queues/clues involving the boy with whom Sam’s mother hopes she forms a relationship when she is really only interested in his cool SNES games. I missed the hair dye in the bathroom, ransacked the master bedroom, fidgeted in Katie’s room, and found the masquerade picture in the sitting room. I raced downstairs through the secret passageway found in the master bedroom, and found myself pressing forward to ascertain why Terry was fascinated with conspiracy theory. Combined with Sam and Lonnie’s forays into the paranormal, I was either led on by the game or my own anticipation that these two plot elements would conjoin and bear fruit. At this juncture, I BSOD’d with the game hinting at Lonnie and Sam, but I, like Jan and Terry, was suspending disbelief concerning the primary theme of Gone Home. Upon the second playthrough, I first listened to the answering machine in the lobby–which I missed during the first play session–and flew up the stairs to Sam’s room where I attempted to read the short story in the closet after dismissing it as inconsequential the first time I saw it, and thusly recuperating it as critical. This time I took notice of the red stains on the bathtub and the hairdye, and there was no denying it. From that point forward, all the queues  around the house point toward this obvious, especially the meta-narrative that I dismissed. Sam’s fantasy pirate/hero adventures which evolve as she ages throughout elementary, middle, and high school  where she fantasizes about being accompanied by a female companion who compliments her own accoutrements serves as proxy for her latent yet budding desire until she meets the one who causes her to self-actualize.

Once I became aware of Gone Home’s modus operandai–The Fullbright Company’s attempt at evoking an empathetic response to this charade of a “coming of age” story that is actually a “coming out” story–I became increasingly disinterested this element of the game, half-listening to the recordings as I rummaged for clues concerning Terry, Jan, and Katie. I don’t believe that The Fullbright Company was trying to “push an agenda” so much as they (in reference to the four members of the company with one of them one of them of them being LGBT) were simply (re)creating a typical experience of a, arguably two, LGBT girl(s) living in the 90’s. As is the case for most adolescents, companionship becomes an obsession that consumes daily life in totality, so one should expect that the narrative be reflective of this. If that was the objective (and it was, according to designer Steve Gaynor) then the game succeeds in its mission. However, when executed as deliberately as is realized in Gone Home, the subject matter becomes a clobbering rather than tender message. Sam and Lonnie are lesbians. I get it. I even accept it. But I don’t have to  condone it.

That said, all other elements of Gone home exude excellence. The anticipatory delight of discovering the assortment of clues scattered around the house functions as its own catalyst for exploration. Not championing Sam and Lonnie’s cause, I found myself enthralled by the “supporting cast” whose stories are not necessarily crucial to the game’s central focus but present themselves as microcosms of a typical, though highly fictionalized, (upper) middle-class (white) family.

Sam’s family is more interesting then I am making them sound here. Well, at least not Katie, who is really supposed to be a type of tabula rasa since it is through “her” that the player experiences rummaging through a house that, conveniently, Katie as player-character has never visited. “She” is a pile of plot devices, from arriving at a colossal yet empty house that lacks mirrors so that we never actually see anyone except through photographs. One could argue that she has a “voice” through the sparse captions that reveal her thoughts concerning the skin mags you may discover or the postcards she sent while abroad, but that would be too generous for what she really is. Oh, she happens to be the perfect daughter, too as the foil to Sam. Just check out her report cards in the basement or her essays on the female reproductive system and contrast her analysis with Sam’s.

Perhaps it is the way that I progressed through the house—maybe everyone else too since “the mother’s wing of the house” is locked upon initial entry—but I felt that Terry steals the spotlight in the game, striking me as the most intriguing character. In contrast, Jan, the mother, represents the strongest and least flattering archetype: the Desperate Housewife. Except that she isn’t a housewife at all because she works, she adheres to the role nevertheless as one discovers correspondence from a college friend concerning “Mr. Perfect” the new guy at her job who simply goes by “Rick.” Enchanted by ennui, the inevitable affair ensues.

There is no defense for cheaters. NONE!. So I won’t dare validate Jan’s decision to be unfaithful (emotionally/physically/spiritually) in her marriage. But I will say that if there is trouble in paradise, one person generally is not the only person at fault. So that’s where Terry comes in.

At first, I’m like WTF about his choice in fiction/writing topics. No, I take that back–even after finishing Gone Home, I STILL WTF’d at his taste. I actually had to do some research to put it all together because I didn’t understand the relevance of Uncle Oscar besides 1 Arbor Hill being his house. I was floored when I came to realize that Terry lives in the house of his former abuser, where he was abused. No wonder it is possible to find a book or two around the house concerning intimacy and marriage! Poor Terry is possibly rendered impotent while living traumatized. I was at least able to celebrate his triumph at the conclusion of his narrative–he couldn’t cut it in one genre, but found a niche in science fiction. Yay for him. Double yay that these novels were a kind of catharsis for him; 1963 was a year to remember for all the wrong reasons.

Another possible reason that Terry became a writer was to win the approval of his father. Remember, the molester is Uncle Oscar, the brother of Terry’s father. So it is not a stretch of the imagination that the molestation alienated all three men from each other, though as the son, Terry would seek his father’s approval regardless. One can see, however, the level of “love” Richard offers his son by signing his name as if he is addressing a student rather than his own flesh-and blood. Someone in The Fullbright Company must have been badly burned in academic circles because I can recognize that kind of scar tissue anywhere.

TRIPLE YAY for the fact that Terry and Jan try to reconcile their marriage by retreating on their anniversary to marital counseling. The narratives of the Greenbriar family conclude in the kitchen before the player discovers the final secret alcoves before the game concludes with me sprinting up the stairs–chest pounding IRL–to the attic anticipating some horrific outcome when in actuality, everyone runs away.

Combined with Kate’s trips abroad, it seems that Gone Home makes an argument for “running away” as an effective solution to the problems that one may encounter in life. That’s too  escapist for my tastes, and perpetuates problems. Terry writes novels rather than directly addressing the pain of his abuse and therefore  prolonging the effect of the trauma and delaying healing; his wife Jan also gets caught caught in the crossfire. For certain, the military is going to be looking for Lonnie soon because they don’t take desertion likely; she was already on the bus possibly headed for base. Contract needs to be fulfilled. Besides, it’s not like she and Sam won’t ever face harassment wherever else they go with the repeal of Don’t Ask, Don’t Tell, it would have made more sense for Sam to follow Lonnie and not the other way around.

Meanwhile, Kate has a humongous house to herself and her lack of depth. How will she keep herself entertained when all of her bizarre family members gone away (for at least a week)?