The show opens with an inconspicuous S.H.I.E.L.D convoy transporting an “asset”. In a very cool scene, the rules of gravity go out the window and the big rig carrying the asset is thrown into the air. The support S.H.I.E.L.D forces are disabled by an unknown enemy, and the asset is removed from the trailer after it lands. Turns out, the “asset” is a nebbishy scientist (and former mentor to Fitz/Simmons) named Dr. Franklin Hall (played by Ian Hart).

Hall was captured by his former partner, Ian Quinn (David Conrad), an eccentric but of course handsome power-monger who hides behind diplomatic immunity in Malta. Quinn used “gravitonium”, a particle invented by Hall, to change the rules of nature and to negate the effect of gravity on the convoy. Quinn wanted Hall brought in to help perfect the use of gravitonium in a larger-scale device.

The Agents of S.H.I.E.L.D. take the ‘bus’ to the site of Hall’s abduction, where it’s revealed that a S.H.I.E.L.D. mole leaked his location to Quinn’s people. Fitz/Simmons find a small gravitonium device and start to put the pieces together. They track the source of the funding for the construction equipment (as boring a task as it sounds) to Quinn’s company.   The team determines there’s no way to get through Quinn’s state-of-the-art security without an inside person, which turns out to be Skye. Skye gets herself invited to a soiree thrown by Quinn due to Skye’s notoriety as a “Rising Tide” operative (remember, Rising Tide = Wikileaks for the Avengers).

Agent Ward briefly gives Skye some combat training, which we know we’ll see later in the episode because that’s how TV works. Skye goes to the party with the intention of hacking into Quinn’s security system to allow Ward and Coulson to ‘retrieve the asset’.

Quinn offers Skye a job (and flirts with the girl, who must be at least 20 years his junior). Skye reveals that she’s been sent by S.H.I.E.L.D and that they’re listening, but feigns loyalty to Quinn. She then uses that convenient combat training to threaten Quinn and get his “shields down” (pun intended).

Fitz/Simmons determine that Hall himself was the S.H.I.E.L.D. mole, but why would want to willingly re-team with Quinn?
Ward arrives to save Skye in the nick of time, and meanwhile, Coulson finds Hall, who’s planning to blow up the whole shebang of the gravitonium device to keep it away from Quinn. The machine activates, and Hall eludes Coulson’s reach by using the gravitation anomalies to his advantage.

With the intention of stopping the device and sending it to the bottom of the ocean, Coulson shoots the protective glass out, sending Hall hurtling into the machine itself and stabilizing the device. The rest of the S.H.I.E.L.D team (hi Agent May, thanks for stopping by) collect the device and lock it in a vault.

Ward and Skye resume her physical training. He’s her “supervising officer”, and we’re treated to more of her sob story of being a foster child/unlikely beautiful computer genius. The episode ends back inside the vault, with a gravitonium-covered hand emerging from the device.

Thoughts: At least May stood true to her “no more field activity” word, but we’d love to know just what happened to her.

Coulson finds himself unable to break down and reassemble his pistol, which may give more credence to the “Clone-son” or Life-Model-Decoy theories.

We’ll see Franklin Hall again, but he won’t be the same.  Hopefully the actor can make him a convincing super-powered badass.

The show was picked up for a full season, which means I get to do 19 more of these! I hope the show gets a bit better, but hey, at least it’s a superhero show on TV. As a kid, I’d have killed for a Marvel show (“Lou Ferrigno in jorts” DOES NOT count) and we have a real one on the small screen every week. See you next time. 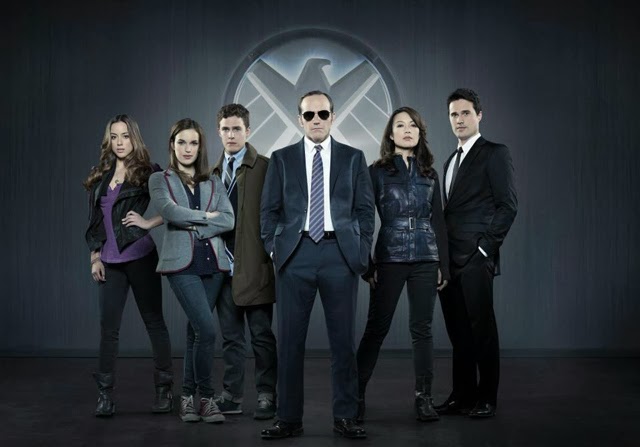