Survivor Series has been a major event in many wrestlers’ careers, from the PPV debuts of the likes of The Undertaker, Rocky Maivia, and Kurt Angle, to the launching of CM Punk’s historic run as WWE champion. Feud blow-offs like the Alliance angle to famous screwjobs like Montreal (and a repeat in 1998 to an extent) have cemented some wrestler’s legacies and career paths. In this piece, we’ll look back at a select group of wrestlers and what importance the Survivor Series pay-per-view had for them.

Few other wrestlers appear to have their solo career so intertwined with the November PPV than Bret Hart.  Oh sure he has a slew of memorable moments and title wins at WrestleMania, SummerSlam and other events, as well as winning both the King of The Ring and the Royal Rumble (shared yes, but it is a check mark on the win column), but consider all that has happened to Hart in terms of major storyline developments and career evolution, Survivor Series has a special place in his career. 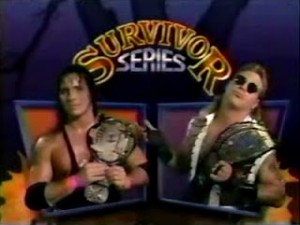 1992: Bret’s first solo match at Survivor Series is his first PPV heavyweight title defense against the Intercontinental Champion, Shawn Michaels.  While there isn’t any storyline to it, or after it, it is an interesting tidbit that the soon to be on and off-screen rivals would have this PPV match considering everything that would happen over the next seven years. 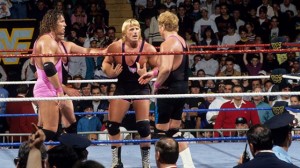 1993: The flashpoint for the Bret-Owen feud happens with the Hart Family’s victory over The King’s Court (with ironically Shawn Michaels subbing for Jerry Lawler), as Owen is the only Hart brother eliminated.  The heel turn seeds were being planted, and by January the full bloom heel Owen Hart would be born, and in turn would lead to one of the best feuds of the day. 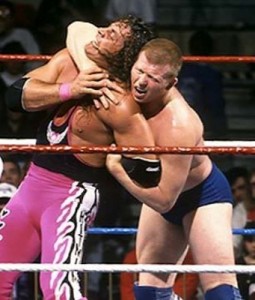 1994: The famous throw-in-the-towel submission match where Owen dupes his mom to throw in the towel on Bret’s behalf, giving Bob Backlund the WWF title, and Owen gleefully running to the back in triumph over getting one over on his brother.  Backlund would drop the title to Diesel a few days later, which would lead to nearly a full year run for Big Daddy Cool, which would end at the 1995 Survivor Series. 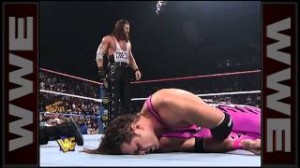 1995: Speaking of which, Bret Hart would be the man to end Nash’s reign.  There have been some suggestions that the brutality shown by Nash in this match and afterwards, along with the sneaky, almost tweener way Hart won the match, were seeds being sowed for what would eventually be the Attitude Era.  In any case, this reign by Bret would last until dropping the belt to Shawn Michaels at WrestleMania XXIV in the Iron Man Match.  It was of course in that buildup, and the aftermath with Bret’s taking a break for most of the spring and summer of 1996 that would ignite the friction between the two, both kayfabe and in real life, to be so combustible that would lead to the events of 1997.  But before that, there is 1996. 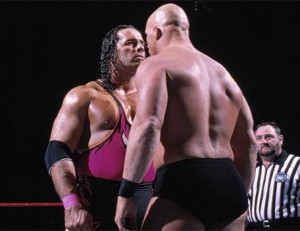 1996: Bret Hart returns for the first time since dropping the title at WrestleMania to square off with Stone Cold Steve Austin.  This is the kickoff to one of the hottest feuds of 1996-1997 as Austin had been running his mouth and going after Hart in promos for a couple of months, egging on Hart to return.  The loss did nothing to quench the desire of the Rattlesnake to continue his animosity towards Bret, and the two would engage in a rivalry that lasted through the summer of 1997.

1997: The Montreal Screwjob, need we say more?  Hart’s final appearance on WWF television for over 12 years is easily one of the most talked about matches of all-time.  In fact, to this day conspiracy theories circulate about Hart’s own involvement in the finish to screw him out of the title and out of the company!  Regardless of one’s opinion of what went down, ultimately it is one of the most historically important matches in WWF history.  If anything alone it created Vince McMahon’s Mr. McMahon evil heel boss character.

The Rock could also qualify for having just as many year-to-year major milestones in his career as Bret Hart. From debuts to title wins, the Great One has quite the Survivor Series lineage.

1996:  Blue Chipper Rocky Maivia debuts at Madison Square Garden.  In his first match he turns out to be the lone survivor, eliminating the last two opponents (which ironically included one of The Rock’s greatest rivals, Triple H). 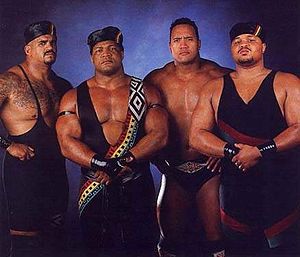 1997:  By 1997 The Rock had turned heel, was starting to be called The Rock, and would be the last of The Nation of Domination to be eliminated in their match against The Legion of Doom, Ahmed Johnson and Ken Shamrock.  With the match’s finish being Shamrock causing The Rock to tap being a nice way to set up their feud in 1998.

1998:  The Rock turns heel and is revealed to be the Corporate Champion for Vince McMahon’s war against Steve Austin.  At the time, The Rock was the youngest world Champion in company’s history.

1999-2000:  The argument tends to fall apart here, while The Rock is involved in main event caliber feuds in both years, part of the Triple-Threat Match where The Big Show would win the title in 1999 by pinning Triple H and then winning a singles match against Rikishi in 2000, neither match has the historic nature in terms of The Rock’s career that his other Survivor Series matches do. 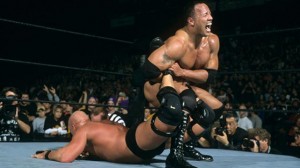 2001:  The Alliance storyline came to an end at Survivor Series, and it all came down to The Rock vs. Austin, this time, with assists from Chris Jericho and Kurt Angle, The Rock finally came out on top over his longtime rival. 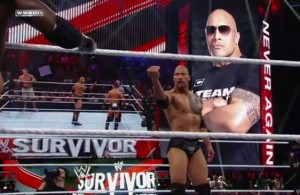 Fast forward to the current product and a case can be made for the champion going into this year’s Survivor Series, Randy Orton.  Like Rock and Hart, The Viper has had many great moments spread out amongst his PPV history, but he has had plenty of key moments played out at Survivor Series. 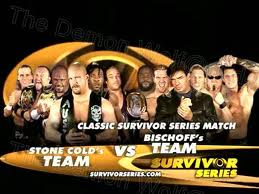 2003:  Just an obnoxious heel at this point, Orton would be the sole survivor of the Team Austin vs. Team Bischoff match, pinning Shawn Michaels in the process. 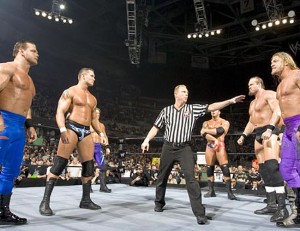 2004:  A year later, having turned face and in the midst of a feud with the man who defeated him for the World Title, his Evolution boss, Triple H, Orton led a team of top Raw faces against Triple H and the top Raw heels.  Orton would be the last man standing in the match, pinning Edge and Triple H for the win.

2005:  Orton would be a heel again in 2005, and was part of Team Smackdown.  For the third time in a row he would be the sole survivor, and for the second time defeating Michaels in doing it.  The match’s aftermath would lead to more Orton-Undertaker fun as well.

2006: Orton’s streaks of being the sole survivor, and being on the winning side, would come to an end in 2006 when his Team RKO fell to Team DX.  Though Orton was the last man eliminated, falling to Triple H, it was the first blemish on his Survivor Series record. 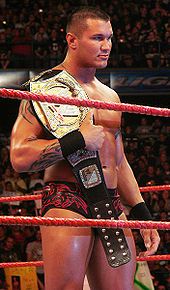 2007:  Orton went into the 2007 Survivor Series as WWE Champion, and would retain over Michaels in a classic match in which Michaels couldn’t use his finisher, Sweet Chin Music.

2008-2009:  No milestone moments to wrap up the 2000s for Orton, but in both years he was one of, the last men standing for his team.  In 2008 he and Legacy teammate Cody Rhodes were the survivors, with Orton pinning Batista for the win, and in 2009 Kofi Kingston pinned him for the final elimination in the match.

2010:  Orton again walks into Survivor Series as WWE Champion, but as a tool in the John Cena-Wade Barrett/Nexus war.  In his match against Barrett with Cena as the referee, if he retained Cena would be fired.  Orton won, and while Cena’s “firing” wouldn’t last all that long storyline wise, it was a nice little twist to have taken place.

2011-2012:  The last two years haven’t seen historical moments out of The Viper, but he still continued to be a dominate force in Survivor Series history.  In 2011 Orton and Barrett would be continuing their feud, and the two would captain their own Survivor Series teams.  This time, Barrett would get the upper hand, pinning Orton to capture the win for his team.  Ironically Rhodes was Barrett’s teammate and fellow survivor.  And in 2012 Orton would again be the last man eliminated, this time by Dolph Ziggler.