Following up the 3rd Biennial Place to Be Nation POP! Peter David Memorial Fantasy Comics Draft (presented by a hypothetical non-rotational DC Unlimited online subscription service), this is the ultimate payoff for this geeky project: the staff of PTBN POP!  and a special guest get to flex their creative muscles and turn their draft picks into a fantasy comic book universe. This is the main event, folks, and we’ve got some great ideas from the participants — Greg Phillips, Jennifer Smith, newcomer Mitch Okun, Russell Sellers, Tim Capel, and Todd Weber.

Before we get started, feel free to check out both the draft podcast and the spreadsheet of draft results.

And once you’ve read through all 6 pages of thrilling pitches, be sure to help determine the winner by sending your very own fantasy pull list of 12 to 15 titles to NickD@placetobenation.com! 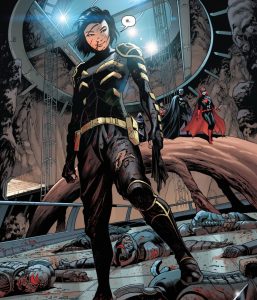 The people of Gotham City can’t sleep. The villain Bane has created and distributed a toxin called Woke, just to watch the city descend into chaos. However, Alfred Pennyworth is the only one immune to the effects of the drug. The devoted butler gathers the team of Batwoman, Orphan and Red Robin to deliver a shocking confession and develop a cure, all while battling the crippling symptoms of sleep deprivation and attempting to keep Gotham City from imploding.

Cloak and Dagger are ready to call it quits. As dependent as they are on one another, they can barely stand to be together. Tyrone and Tandy want to be freed of their powers (and each other) so they turn to Doctor Strange, who has been dabbling into the Darkforce. He thinks he can successfully strip them of their connection but the journey to do so may actually bring them closer together.

Someone is targeting performers of the Carson Carnival of Traveling Wonders. Clint Barton is confronted with a blast from the past when the new owner shows up at his door. The very attractive and persuasive Tamara Callahan knows of Clint’s connection to the carnival and pleads for his help in finding out who is preying upon her employees. He reluctantly agrees but soon discovers that the mysterious Ms.Callahan is more than just a carnie boss.

Green Lanterns Jessica Cruz and Simon Baz have been partners and friends for a while now. Eventually, the Lanterns start to see each other as something more than just a friend. One night, after a particularly difficult encounter with Larfleeze, they confess their feelings and fall into bed together. They can’t get enough of each other and decide to sneak away to a distant planet for some private time without the responsibilities of protecting the sector. Little do they know, Larfleeze has found something he wants and will not rest until it belongs to him. Will their lust have consequences that threaten the galaxy? Can Jessica and Simon handle being Lanterns AND lovers? 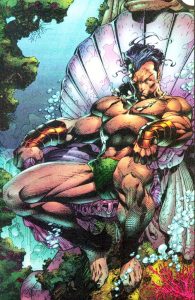 Fatigued with the battles of land and sea, Namor the Sub-Mariner shuns his royal heritage and decides to give in to his long withheld carnal appetites. He plunges into the depths of taboo encounters. The journey may prove too much for Namor as he becomes obsessed with exploring the darker side of his nature. Leaving him to wonder if he has lost himself, or has he just now found what he needs? Perhaps instead of being Namor the Sub-Mariner, he can find peace as Namor, the Submissive.

The Tick is confronted by his unremembered past when the evil mastermind Thrakkorzog kidnaps his trusty sidekick Arthur and transports him to Dimension 14B. But these two are not the only ones who have been forced into his demented plan. Thrakkorzog and his sentient tongue have summoned the Phalanx of Gloom to his…errr…their side and challenged Tick to defeat them all in order to save his best friend. He faces the likes of Cockroach, The Red Scare, The Candyman and the Praying Mantis. What do these vile villains know about his origin? Will he be forced to choose between saving the person he cares about most and discovering where he came from?? SPOON!

Young Dinah Drake stows away on a yacht docked in Gotham City harbor. Before she can steal what she needs and get away, the boat launches. During the voyage, a strong storm threatens to capsize the boat and Dinah is knocked overboard. She washes up on a strange island. But she’s not alone. She stumbles onto a drug operation overseen by the Bertinelli Mafia family. Also confined to the island is the don’s troubled daughter, Helena Bertinelli. When Helena discovers Dinah in the woods, the two girls began a friendship that will alter both of their lives.

Ant Man and the Wasp

After a whirlwind romance, Scott wants to pop the question to Hope. He visits Hank Pym to ask him for his permission to propose. As much as Hank likes and trusts Scott, he wants to make sure that this man is a good match for his daughter. So he devises a complicated series of challenges in order to test Scott’s strength of character. Megalomaniacal villains are one thing but nothing is as daunting as proving his worth for the love of his life!

Squirrel Girl @unbeatablesg Hi! You probably know me from when when I totally kicked Thanos and Doctor Doom’s asses. Remember?? Anyway, I’m a senior at Empire State University now and things are going great! I mean, they were… until I got hungry. Like, real hungry. At first I thought it was just PMS, ya know? Stuffing my face with chocolate and pasta. Then bam! All of a sudden I’m eating raw meat and side eyeing my squirrel buddies!! What does squirrel taste like anyway? NO! I can’t think like that. @starkmantony little help?? 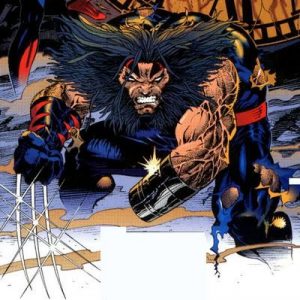 At the end of the 15th century, Slade Wilson is a noble knight. But as the feudal system is coming to an end, he is finding to more difficult to keep his growing family fed. Late one night, a chance encounter with a strange mage and his potions give Slade extraordinary physical and mental capabilities. Also it makes him a little crazy. Deathstroke, as he now calls himself, decides the mercenary life would be much more lucrative. He embarks on a journey of war, death and destruction that will tear his family apart.

Synchronicity is defined as a “coincidence of events that appear meaningfully related but do not seem to be causally connected” and was first introduced by psychologist Carl Jung. Sorcerer and con man John Constantine knows first hand the power of this concept, as he has benefited from it for most of his life. However, lately he seems to be short of luck. In a desperate move, Constantine travels back in time in order to meet Carl Jung. In a synchronistic twist, Jung is being terrorized by paranormal entities, bringing him to the brink of madness. The two men are each other’s only hope….perhaps in more ways than one.

Click ahead to the next page for more pitches, with these coming from one half of the Hard Traveling Fanboys, Greg Phillips!