“What Makes a Hero??”
HAL JORDAN believed he had long ago laid to rest any lingering questions concerning his character. But after Hal walks in on TOM KALMAKU and CAROL FERRIS, bed broken beneath their heaving, insatiable lust, Earth’s emerald defender once again assumes the guise of PARALLAX and annihilates COAST CITY along with its 5 million inhabitants. A retaliatory act in a moment of weakness. Still, Hal was pulled back from the brink once before. However, when the SILVER SURFER brings news of a shocking proclamation by GANTHET that the giant parasitic literal fear creature known as Parallax was, “just some shit we made up,” Hal’s teammates must ask themselves whether there’s anything of the man worth saving.

“Dinner Invitation”
CAPTAIN MARVEL joins the SILVER SURFER and STORM in a last-ditch effort to end the destructive rampage of HAL JORDAN! The heroes have tracked their former ally to MOGO, already stained with Oan blood in the midst of Hal’s massacre. Having survived their best shot in the form of YELLOW HULK, it rapidly becomes apparent to the Guardians that Hal has grown exponentially more powerful than even their combined might. They must accept that their mission is, at best, one of containment rather than outright victory. Only the Silver Surfer seems to realize that a galactic-level threat calls for a galactic-level solution. As Hal enters the Central Power Battery, the Surfer makes his play – summoning GALACTUS, DEVOURER OF WORLDS to Mogo!

“Somewhat Unique”
With WILSON FISK apparently lying dead at the hands of WOLVERINE, Daredevil barely survives a brutal showdown with the brainwashed adamantium killing machine. Despite taking a sabbatical from crime-fighting to tend to his wounds, MATT MURDOCK finds that his civilian life is far from uncomplicated. First, Daredevil returns to the streets of Hell’s Kitchen, but it isn’t Matt behind the mask! And can it be a coincidence that old sparring partner HARLEY QUINN chooses this moment to make her reemergence? Finally, a shaken Matt questions whether he’s fallen from grace (again) upon meeting FOGGY NELSON’S newest client: an eccentric vagrant identifying himself as MIKE MURDOCK!

“Fearful Extremities”
At last, the deadly SHREDDER has clawed his way back from the depths, reclaiming a seat of power as the head of the dark assassins known as the HAND! But there’s no rest for the wicked, as Shredder’s new empire is set upon by a figure from his past in the form of a new foe. The vile Utrom warlord KRANG has claimed possession of the seemingly murdered WILSON FISK – BODY AND SOUL! – and in so doing, has inherited New York’s criminal underworld. Now these mad genius frenemies must find some way to set aside their egos, personal history, and sexual tension as they forge an alliance to consolidate power. The one, smoldering desire they share? It’s time for the FOOT CLAN to come home. Unfortunately, this dread duo may find they have underestimated the resourcefulness of the Clan’s new leader: MOON KNIGHT! 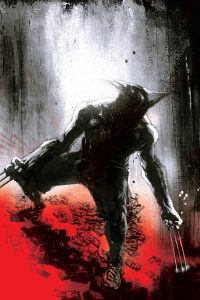 “Not Unlike a Caged Rodent”
WOLVERINE has carved a path of blood and urine and vomit through his captors, finally coming face to face with SHREDDER! Moments from exacting righteous vengeance, the mutant berserker is obliterated by the HAND’S dark magics, his very essence scattered to the four winds! Having overcome his “programming” and outlived his usefulness, a traumatized, semi-amnesiac, but somehow physically reconstituted Logan must find himself… or rather, all his selves! Starting with the curious amalgam called… DARK CLAW!  Tumbling through time and space, Logan encounters his various “others:” the people he could have been if not for a quirk of circumstance. Through it all, he can’t help but shake the existential question, “Isn’t this all a little too familiar?” And why is he haunted by the recurring epithet: “CYCLOPS WAS RIGHT!”
Guest-starring WILD THING, THE PACK, JIMMY HUDSON, WEAPON H, and more! 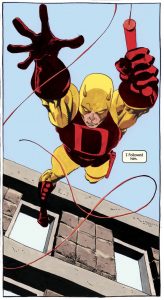 “Fifth Circle”
A chance reunion in the present sends a sorrowful MATT MURDOCK tumbling down the memory hole of his tormented psyche. He recalls his days in the immediate aftermath of Karen Page’s death: raw, unfocused, and consumed with BLIND RAGE! A sadomasochistic abuse bender leads Daredevil to his first meeting with the madcap HARLEY QUINN! Kindred spirits? Or opportunists stumbling into a mutual thrill? These shattered fragments of memory may hold the key to unlocking the secrets of DD’s present – if he can only fuck the pain away until the pieces form a cohesive whole.

“Genoshan Prankster”
Lovebirds JESSICA JONES and LUKE CAGE have a sneaking suspicion that the supposedly new-and-improved tourist destination of Genosha isn’t the squeaky clean portrait of paradise it boasts in its branding. If their instincts prove correct, they’ll stop at nothing to blow the lid off the island nation’s dark underbelly. And if they’re wrong, hey, it’s a tax-deductible vacation in the lap of luxury! But when Jessica witnesses a Genoshan delegation become violently, explosively ill during a crucial diplomatic summit with U.S. ambassadors, it feels a little too suspicious than a mere case of food poisoning. Meanwhile, Luke infiltrates an illicit MMA ring on Genoshan soil with the steel-hearted mutant COLOSSUS as its prize fighter! What’s the connection? The clues are as sparse as they are disparate. An Ani DiFranco mix-tape. A shit-covered speculum. A petroleum-toting, foul-smelling femme fatale. How does it all end in MURDER? A murder for which Colossus seems all too ambivalent about his involvement

“Requiem for a Team”
Alcohol. Narcotics. Food. Sex. Rage. All means to an end. And JESSICA JONES, ROY HARPER, CAROL DANVERS, BRUCE BANNER, BIG BERTHA, MAGNETO, and SNOWFLAME; users, each in search of a new drug. They are more than a little confused as to how they landed in the same support group, yet compelled to give it a chance. Hang on, isn’t this a massive generalization that cuts across a wide swath of individual experiences, conditions, and treatment modalities? Isn’t this one-size-fits-all approach unethical, not to mention offensive? Hey, whatever gets results. Slowly but surely, our group is making progress. Learning new ways to fill the void in their lives. Forming healthy social connections. Taking responsibility. But when sentient stimulant JOHN SUBLIME enters the equation, it begs the question: how culpable can the user be? Get addicted to this PRISM Award-baiting series for accuracy in depictions of mental illness and addiction.

OUR OLD: THE WAY TO DUSTY DEATH

“Days of Future Aghast”
From majestic Mount Wundagore, the HIGH (AF) EVOLUTIONARY has decreed that all human beings in advance of a particular age are functionally obsolete, anathema to the tenets of evolution, and cannot be allowed to persist. To that end, he enacts a plan to irradiate the entire earth with a biological “time bomb” that will cause all humans to molecularly discorporate upon reaching their 90th birthday! Faithful cow-woman BOVA, realizing that her days may be similarly numbered, heroically sets out to thwart her master’s mad ageist designs in a race against time. All she needs is a little help from her friends. First answering the call to arms is MAY PARKER, the dormant Power Cosmic with which she was once imbued as the GOLDEN OLDIE now reawakened! Most resilient of her species and/or age cohort, Mrs. Parker is joined by intrepid sidekick ANNA WATSON, gathering an impressive array of fellow (at least) octogenarians – including MOTHER ASKANI, AGATHA HARKNESS, MA HUNKEL, and DESTINY – to stop this scheme, and teach their foe a lesson at the same time. And they’ll do it… at a medium pace. Don’t miss a minute of the high jinks, sass, romance, and well-timed naps.
Guest-starring MAGNETO!

“Baking Bad in Braddock Manor”
Brian Braddock, the British superhero known as CAPTAIN BRITAIN, is deeply British, so it’s only natural that he and his lovely wife MEGGAN should be acquainted with fellow Brits DEATH’S HEAD II, KILLPOWER, MOTORMOUTH, DIGITEK, and DARK ANGEL to have twee British adventures, brought to you by Alan Davis! Regrettably, these companions have all fallen on hard times in recent years. They pass their days popping down to the pub for a pint, swapping old war stories, and losing trivia tournaments, fitfully aware that their best days are behind them. Then, the recognition of a mutual, particular set of skills brings new light into their dreary lives: baking! But what to bake that will best combine gastronomic aptitude with the unmet needs of the market, conveniently one that does not place extraordinary value on dentistry? Meth, of course!

MORTS OF THE MONTH 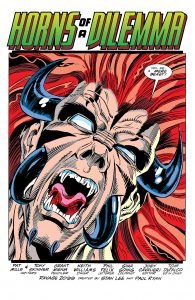 “Buckle Up”
RAVAGE 2099 arrives in 2018 on a mission to preserve his past… aka our future! Because… he already did..? You see, the rules of time travel are simple, but actually quite complex. The actions of one individual following a fateful encounter with Ravage – either SLEEPWALKER, SLAPSTICK, DARKHAWK, OR ADAM X THE X-TREME – will have dramatic implications for the 22nd century. If only Ravage could cut through the temporal fog over his mind to recall who it is… or what he’s supposed to do. And given the state of his suspects today, Ravage can’t help but wonder if he overshot his mark by several years. Plus, speaking of centuries: the space-slicing interdimensional alien explorer known as CENTURY lurks with his own agenda — one that may undermine Ravage’s mission and derail the course of history.

“Burning Hammer”
PAAAIIINNN. SUFFFRIN’. It’s a life that 19th century moonshiners GAMBIT AND ROGUE know all too well. They think they may have finally found a sanctuary by cutting a deal with the enigmatic T’IEVES GUILD OF N’AWLINS. Maybe, they can finally stop running. All the better for JONAH HEX, relentless in his pursuit. The outlaw lovers don’t know enough to be afraid of their inevitable fate, for ignorance is bless. And Hex is fearless, steadfast in the face of certain death. Fortunate then, since whatever knows fear… BURNS at the touch of MAN-THING! How appropriate for this Louisiana backwater to serve as the point of convergence – after all, it is host to the Nexus of All Realities! At the end of the day, the concerned parties will learn to accept that they’re all just frogs on a lily pad in the swamp of PAAAAYYYNE.

“Aftershocks”
Following the traumatic events of OPERATION: ROSEBUD, the contents of this issue are CLASSIFIED!

That does it for our exhilarating fantasy comics pitches. Once again, be sure to help determine the winner by sending your very own fantasy pull list of 12 to 15 titles to NickD@placetobenation.com!