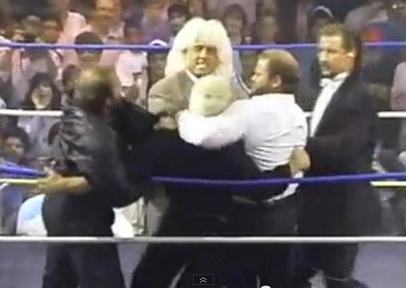 Chad and Parv march bravely into the 90s with Clash of the Champions 10: Texas Shootout. In this show:

– [6:21] a lengthy trawl through the Meltzer newsletters from January and February 90: AWA’s days numbered on ESPN! Kendal Windham caught counterfeiting money! Mike Tyson! Pedicino gets engaged and walks! Joe Isuzu! Geraldo Rivera! Vince goes to Japan! Chad considers arguing that SMW was bigger than WCW for a while in the early 90s! Plus speculation on Meltzer’s informants.
– [40:20] Solie’s Wrestling News Network roundup.
– [45:51] Review of Clash 10 including: discussion of the Flair heel turn and booking options around that time, analysis of the lyrics of the Wrestlewar Rap, some general thoughts on Mick Foley and The Undertaker, and considering the idea of Great Muta as a face.
– [1:56:10] End of show awards and listener comments.