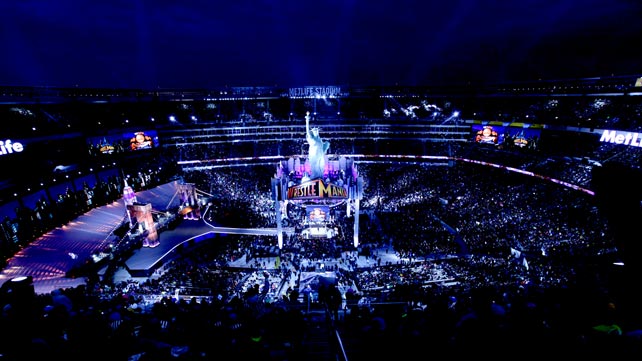 It’s no shock that WrestleMania is the WWE’s biggest event of the year. The entire WWE roster bring their A-game for this spectacular night, which has become a three day event in recent years. Starting with the Hall of Fame ceremony (and with the Axxess fan convention running all weekend) and going through to Monday Night RAW after the revent, it’s an exciting place to be a part of. Whether watching from home, at a bar with friends or being in the arena, wrestling fans have high expectations for WrestleMania.

These two WrestleManias were very similar with the main event for both being The Rock vs John Cena. WrestleMania 28 was in Miami – The Rock’s hometown – and was advertised as a “Once In a Lifetime” event. Of course, the following WrestleMania in New Jersey would have the same match on top of the card.  Thanks to an increased maximum capacity, while also being in the wrestling hot-bed of the New York City area, the attendance figures surpassed 2012’s great numbers.  The WWE’s drop in pay-per-view sales for this event is more a reflection of the repeated headlining match and a card that fans were less excited to purchase.  Despite this, WrestleMania 29 eeked out the claim of highest grossing pay-per-view in history thanks to that increased gate.

The WWE continues to break records and set the bar higher and higher. WrestleMania 30 is set to be held at the Mercedes-Benz Superdome. The maximum capacity is a little over 72,000 so there will be fewer ticket sales, obviously. This being a milestone WrestleMania, I think it’s safe to say the WWE will be putting on one heck of a show. Only time will tell, but I predict a higher PPV count than the previous record of 1.3 million; keeping with the WWE trend of breaking records and setting the bar higher.