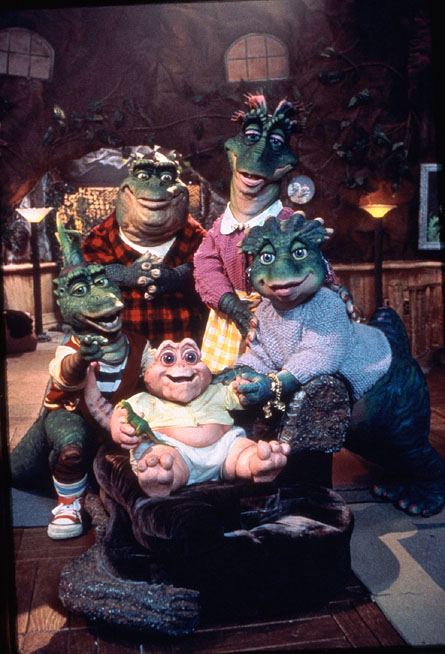 Jen: Not the mama!!!! Next up, we are talking about the show Dinosaurs that debuted on TGIF in 1991.

Oh, how I loved that baby dinosaur. (And yes, I just checked Netflix instant, it’s there. The entire series. Now start streaming!)

Justin: Yes! One of my favorite shows growing up…I was glued to the TV every Friday night for the duration of the series. I loved the concept and the setting because it was so different. The fact that it wasn’t a cartoon made it even better. I dug the Muppet aspect of it, made it stand out.

I also loved how they took modern day issues and put them in the paleontological era…just like my all-time favorite episode: ROBBIE DOES ROIDS! How fucking brilliant? Who needs Lyle Alzado? We got Robbie, baby! 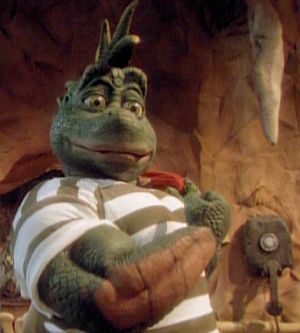 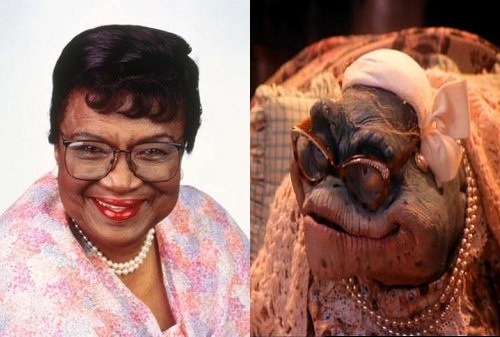 And this may be controversial, but I couldn’t stand the Baby…he became early era Bart Simpson…all catch phrases and way over pushed. Robbie and Earl were where it’s at. Charlene was kind of just there…almost like a prototype of Meg Griffin.

And we can’t forget the great BP Richfield! Voiced by none other than Sherman Helmsley, brother of Hunter.

Who was your favorite character?

Jen: Everyone knows I’m a huge fan if the Muppets! This show was no different. I loved how Charlene and Robbie had modern day teenage issues, like that’s really the type of stuff they would have had to deal with back then.

I still remember when Robbie did roids! Such controversy! It’s like the episode of Saved by the Bell when Jessie gets addicted to caffeine pills. It’s one of the first things I think of when I think of the show.

I always thought the grandmother looked like a frog. I never noticed the resemblance but now I feel the need to see it myself…

I loved the Baby! He was such a brat. And yeah, his catchphrases were a bit much and kind of annoying but they made him loveable to millions.

Charlene was pretty much an afterthought; like they decided last minute they needed a third kid but didn’t really plan out her personality. She was sort of a stereotypical generic teenage daughter. At least with Meg Griffin they make fun of her every episode. You know, now that I think about it, I really don’t remember much about the mom or any story lines that featured her.

But what I do know about her is that Jessica Walter, aka “Lucille Bluth” voiced her character! Who knew that forgettable dinosaur and that snarky woman were one and the same!?

Earl and Robbie were probably my favorites, too. Creating all of the characters and even the really minor ones like Earl’s coworkers had to be such a process. I really think that’s why I liked the show so much.

Remember the episode when Baby grew that horn? And when Robbie wouldn’t eat meat?

Justin: Yes you hit the nail on the head…taking modern day issues and subjects and putting them in that time period is what made the show so awesome. It was a smart show too, very smart and perceptive. I feel it’s definitely one that takes a few more watch throughs to pick up on the jokes we missed (sailed over our heads) as kids.

Roid Rage Robbie > Pill Popping Jessie by far…Robbie became the man, Jesse became even more annoying than she usually was. The Baby just got old to me, I got the appeal but it became a bit forced.

Robbie definitely got the deep story lines… You mentioned about when he went vegetarian? They explored bullying big time in that one, hinting he may be gay or addicted to drugs because of it. And the horn! Puberty at its best. Robbie was the man. There was a lot of Brandon Walsh in Robbie Sinclair. 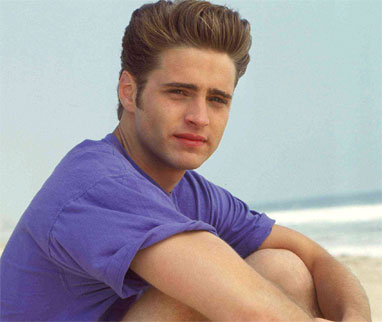 Charlene was just a typical 90’s teen… materialistic and dramatic. I just loved how they aped modern society and satirized it in this setting, so well done.

I had no idea Jessica Walter was Fran. Good stuff. Just glad Robbie wasn’t a Motherboy! 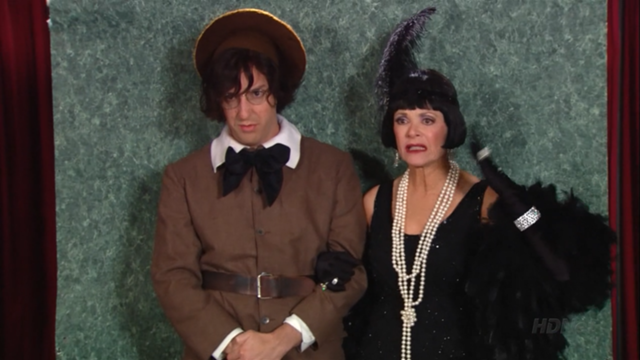 So, we have two topics we have to talk about at some point. We will save the sad one for a bit.

But, theme song! Where did it rank for you?

Jen: So glad that Robbie wasn’t a Motherboy, it would have ruined it all for Buster. And that would have just been so sad! Sally Struthers voiced Charlene, and I always thought that she was so perfectly fit for that role.

The theme song! It’s funny, before I decided on this show I watched a few minutes of the first episode. It all came flooding back to me, but I remembered theme song. How could you not? I think it was a great choice by the Hensons, it perfectly matched the theme and mood of the show.

I don’t wanna talk about the sad part! Really though, I think it ended too early. Putting a show like this together today would have cost way too much money to produce, I imagine that had a lot to do with its cancellation.

Justin: Again, the greatest quality of the show was their take on social and current events and the battle between science and religion/beliefs. The finale is super sad but also very poignant and a great social commentary. The dinosaur species basically get lazy and abuse the environment, led by the incompetence of a major corporation. Then something goes seriously wrong, leading to a series of cover-ups that just end up destroying everything, due to bringing on the Ice Age.

I always felt bad that poor Earl is the one that kind of caused the extinction. He didn’t deserve that kind of legacy. The closing moments are rough to watch as the dinosaurs are just waiting to freeze to death and the show ends. How fucking traumatizing.

Where do you think the show stands in the pyramid of great 80s fare?

Could a remake (cost not withstanding) ever work? Or was it just a perfect time in society for that kind of hidden social commentary?

Jen: I know that this show was Jim Henson’s dream three years in the making before his death. I wouldn’t be surprised if the ending was the message he was trying to get out there all along. Clean up your act or we’re all going the way of the Dinosaurs.

I was pretty upset when it all ended. I remember thinking “That’s it?! Why!?” I guess the message didn’t really stick with me then, but I get it now.

Not really sure where I’d rank this show. It definitely had some deep messages for a sitcom, and was such an original idea back then. Did it have the audience? Did the messages get across to the demographic that actually watched the show like the messages in Growing Pains did?

I don’t know. I think I was really too young to understand but I think it helped set the stage for future offbeat shows. It was purely a Henson production, it appealed to kids and adults. There is a reason Muppet Movies do so well in the box office. 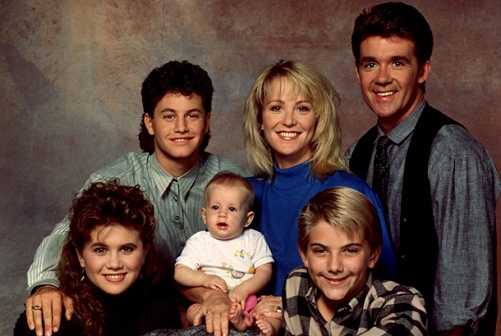 I don’t think a remake of this specific show would work. Budget aside, it has been done. Remakes are always a big chance that not all networks are looking to take. It’s worked for some shows, but more often than not, a remake lasts a season or two and then fades. Can’t see it working as a movie either. It’s been 20 years since it went off the air and it’s not entirely relevant today. Could a similar show work, maybe with a different species or as a cartoon? Sure. But kids are different these days, and although there would be an audience for the nostalgic folks like ourselves, I think the appeal would fade.

Maybe it couldn’t last as a remake…but Disney does in fact own the Muppets now, and I think it would be pretty awesome if they changed the Dinosaur exhibit to incorporate the Sinclair family! What do you think? It’d be perfect if right as you are traveling back in time to today, Baby somehow got in your vehicle and came back with you! And hit some unsuspecting passenger on the head and said “not the mama!”

Justin: Yeah I agree about the message and Henson. Definitely seems like something he would try to convey. We are all just as …what’s the opposite of invincible? Vincible? We are all vincible.

Yeah the end was such a shock… I guess at the time, people just assumed it wasn’t renewed and since dinosaurs did go extinct, it kind of made sense. But that didn’t make it hurt any less.

I think it was a great blend of styles. The Muppet feel and Baby appealed to kids while the irony, parody and storylines appealed to an older audience. I feel like the show is often forgotten or overlooked when it comes to 80s sitcoms. Sure it ran like seven years less than say, Family Matters, but Dinosaurs is much more poignant and funny, despite FM being the show more associated with classic 80’s sitcoms. I wish some channel would air reruns and get it back out in front of the public eye so it can be better remembered.

I agree, it could never be redone. As we said earlier, if was the perfect time and place for a show like this. Not sure it could work at all in today’s over-saturated cynical pop culture society. Honestly it would never be given much of a chance today. I think you could say the same for Bart Simpson if he debuted in 2013. Just like Baby, he was a product of the cool dude catchphrase machine mindset that dominated that time period.

This was a good choice, Jen. I feel like this is the first one we really had to think about and dissect a bit, mainly because it’s not as front and center as the others we have done.

That means something mindless and simple must be on deck… Stay tuned!

And don’t do steroids or be a vegetarian or we will all go extinct!