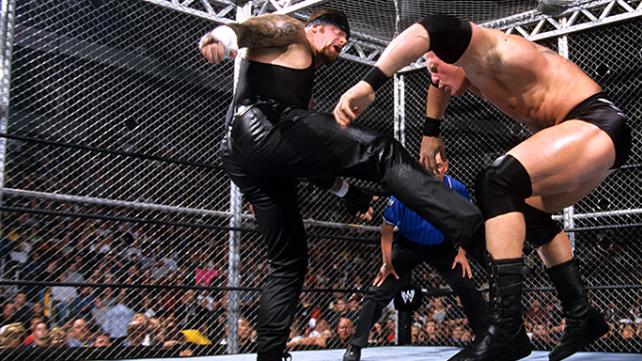 The Undertaker vs. Brock Lesnar (c) – Hell in a Cell for the WWE Championship

Being appointed the heir apparent in WWE is a special accolade not heaped upon many people. However, being successful after gaining the strap is an even tougher task based on the past fifteen years of history. Seeing individuals from Jack Swagger to The Miz to even Daniel Bryan currently have less than stellar title reigns makes an individual look back at the rise of Brock Lesnar in higher regard. After dismantling of The Rock at SummerSlam, Brock was successful in his defense against The Undertaker in Unforgiven. This match was marred with conspiracies and cop-outs depending on which source is stating whether Taker called an audible the day of the show and refused to put Brock over or not. Hell in a Cell felt like an opportune time to finish the feud and once and for all decide how committed WWE was overall to Brock.

Brock enters the ring first which thankfully Cole and Tazz don’t shy away from and they set the stage on why Brock would chose this and how Brock is going into hostile territory of the cell against Undertaker. Brock tries to use his amateur background to gain an early advantage but Taker responds with some stiff elbows and strikes. Brock being the beast he is, powerslams Taker and then does some nasty shoulderblocks in the corner. Taker reverses the tide by using his broken hand cast. Brock kicks the cage to try to escape but there is no way out. Taker does a great job stalking Lesnar and Lesnar has a real look of concern. Like any damaged animal, Brock fires back when in the face of peril and he starts going after the broken hand with a vengeance.

The cast interplay is really interesting. It is a clear target for Brock to work over but it also can be a weapon for Taker. Taker hits a big shot and Brock is bleeding on the floor. Heyman has an extreme look of concern. Taker works over Brock on the outside with a bevy of nasty looking stuff. Taker hurls Brock into the cage, grating it against his face, and cage climb assisted boots to the face. Taker gives his signature leg drop then gives an odd looking knee that he pins Brock with. Heyman is pleading with Brock to do something and reaches his arm into the cage in a great moment. Just as all looks lost from Brock, he is able to catapult Taker into the steel cage and ring post. Heyman is busted open on the outside in an amazing touch showing how dangerous the cell can be.

Brock takes over and gets Heyman’s belt to use against Taker. The belt gets tied to Taker’s hand and with Heyman pulling it, Brock goes on a rampage hitting it with a chair around 7 times. Brock then tries to rip the entire cast off. Undertaker fires back with a flurry of punches to a huge pop from the crowd. In another vicious spot I didn’t remember from before, Taker gives Brock some stiff kicks while Brock is still looking to rip off the cast. Heyman is perverse telling Brock that he can do it and that it is his destiny.

After an extended segment on the outside of the ring, we are back on the inside and Brock has successfully ripped the cast off. Brock sets Taker on the top rope and then swings from the cage like a pair of monkey bars delivering kicks. Taker hits a low blow and sends Brock straight to the mat. One good looking elbow drop later, gives Taker a near fall. Lesnar takes another nasty bump to the outside when he is on the ring apron and gets a big boot sending him into the cage. Taker follows that up with a tope and both guys are weary and exhausted in this point of the match. Brock slams the steps face first into Taker’s face and he hits a gusher. This is one of the nastiest blade jobs you will ever see. Brock, seeing this, does the same thing again and you can see the blood streaming down in a puddle.

Brock and Heyman celebrate while Taker recovers for a second on the inside. Brock hits a spinebuster for a nearfall. We get a slugfest with Taker running on adrenaline and firing back with the broken right hand. Taker goes after Brock’s right hand in a measure of revenge. Old school is thwarted by Lesnar. Taker reverses the F-5 attempt with a chokeslam and the crowd erupts at a great nearfall. Brock’s cockiness gets the best of him when he mimics going for the last ride. Taker is being portrayed like a zombie in this match, constantly coming back when you think he is done for. Taker hits a DDT and now motions for the Last Ride. Brock, showing how resilient he also is, charges Taker in the corner and starts punching him. This of course allows Taker to hit the last ride from the corner and Lesnar has to use a rope break to break the pin in great, dramatic nearfall. Taker only has the tombstone left and he goes for that, Brock counters it, amazingly hits the F-5 and pins Undertaker clean as a sheet.

This match is an epic war that only gets better with each viewing and always sucks me in. I compare it to a part horror movie, part superhero movie with both guys not giving an inch and constantly coming back from the extreme damage inflicted on each other. This should have poised Brock to have an epic run – even more than the win at SummerSlam vs. The Rock, and this was the most definitive win of his young career. If you haven’t seen this brutal war, check it out as in my opinion only the original Hell in a Cell match is better.