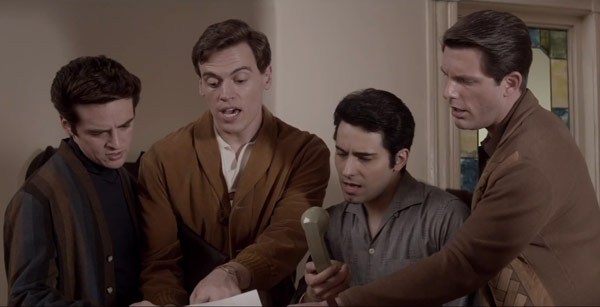 I’ve talked about musicals before, and what it boils down to is that I’m not the biggest fan. I have nothing personal against musical theater. But to quote Jeff Winger from Community: “I see the appeal, and I would never take it away from anyone. But I would also never stand in line for it.” Yet there was something about Jersey Boys that drew me in. It was most likely my familiarity with the Four Seasons and their songs. Not to mention that it was directed by Clint Eastwood.

Starting in the early 50’s, Frankie Valli and his partners Tommy DeVito and Nick Massi try their best to break into the world of show business anyway they can. When Tommy’s friend Joe Pesci (Yes, that Joe Pesci) introduces them to song-writer Bob Gaudio, they finally record some smash hits. But under the surface, they hide tension that could pull them all apart.

There is no way around how well the musical aspects of the film have been constructed and executed. It doesn’t feel random, it’s organically sprung without the suspension of disbelief that normally accompanies musicals. The songs themselves are toe-tappingly fun, and well performed. I’m probably even going to download the soundtrack despite the fact I already own most of the Four Seasons discography.

The script is strongly written with enough depth into the characters and their emotions. It’s a great story that they tell. The problem, however, is that it feels very loose and disorganized. Like the man that eats all his vegetables first with only occasional bites of steak in between, the film doesn’t really cover all the parts of the story in a balanced way. You forget about some things until they come up later, and by then you don’t feel like you’ve had enough. It needs a little more substance where it matters, but it’s still delicious.

Tonally, I’m not exactly sure that it really fits Clint Eastwood’s style. The man is very clearly one of the greatest directors of all time, and he has a distinct style and appeal. But this movie lacks the bombastic energy that many musicals have. It could use a shot of energy to help it rally come to life. It’s well done, and Eastwood tried hard, but it’s not as much fun as it could be.

Acting wise however, we see some strength across the board. Keeping in mind that most of the main ensemble are making their film debut, we see some powerful performances from these freshmen to the screen. And veteran Christopher Walken carries some real weight in his supporting role that adds to the power of the film, and makes you feel like he isn’t wasted.

Yet, Andrew’s Standout here is John Lloyd Young as Frankie Valli. He is full of heart that makes Frankie come to life in the way that Larry Parks did to Al Jolson back in the 1940’s. It’s a fitting tribute, one that re-introduces us to this golden voiced icon, and makes us fall in love with it all over again. I really hope this serves as a springboard to bigger roles. I’d love to see more of Mr. Young.

All in all, Jersey Boys is well acted and well sung, but it’s not as fun or strong as it’s potential suggests.